In this episode of Backpacking Travel TV we explore Nomadic Samuel’s roots in a place called Gocheok dong which is nearby Guro and Sindorim stations. As part of a subway challenge – that we completed with several other travel bloggers based in South Korea – we enjoy wandering through traditional Korean homes while noticing many new high rise apartments. I used to live on a shack on top of a roof that has since been demolished and replaced by a modern apartments.  I couldn’t help but feel somewhat melancholic about it being complete gone given that I endured so much during that first trying year in Seoul.  When a part of your past is destroyed it feels a bit more empty.  I noticed my hagwon (Korean private institute) where I first taught at many years ago was still open for business.  In fact, the advertising on the side of the building still looked nearly identical and I wondered out loud if any of the same teachers I worked with still taught in those tiny little rooms. Audrey had fun putting a lovely flower in her hair and explaining about the Anyang River which is used by many Koreans for inline skating, rollerblading, biking and jogging.  There was a lot of new development in the areas, as we both noticed a new Korean baseball stadium being built in the area. Finally, we enjoyed walking through a Korean traditional market that specialized in Korean rice cakes, fresh fruits and dried vegetables.  It was a fascinating experience to check out this area of Seoul I hadn’t visited in years.  Although some things remained the same many things were now different.  I suppose that is metaphor for life as it evolves before your eyes. 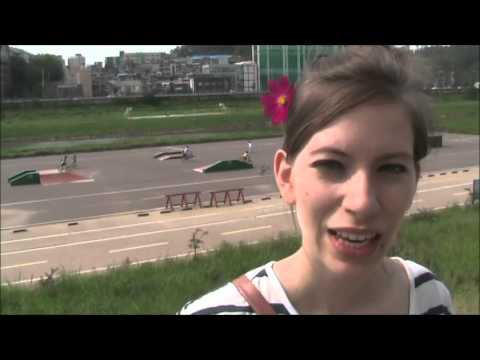