Generally speaking, I’m a proponent of slow travel. Traveling slow allows you to live more like a local as opposed to racing around a city like a tourist; however, with just 48 hours in Singapore we were forced outside of our comfort zone, for a couple of days, and we ended up loving it.

The fast paced (and futuristic) elements of the city were conducive to our mission of seeing as much as we possibly could in such a short period of time.

With mere hours as opposed to days to explore the city we set out on foot, by bus and via boat to explore as much of the city as possible.

Although we visited many of the main attractions it was our time spent wandering around neighborhoods such as Kampong Glam (the historic Malaysian quarter) that were my favorite moments in the city.

As one of the most livable cities in all of Asia it is also one of the most expensive. If in the future I had a high paying position I would consider coming to Singapore as an expat as opposed to being just a tourist.

Welcome to Singapore! We’ve got less than 48 hours in the city and we’re going to show you as much as we possibly can.

With limited time ticking down to visit the world’s most prosperous city state and busiest port, we set out on foot, bus, subway and boat to cover as much ground as we possibly could.

Singapore has often been given the title of a sterile Utopia; however, after traveling around chaotic Southeast Asian hubs like Bangkok, Kuala Lumpur and Saigon it was a welcome relief to visit a mega city that was clean, orderly, spacious and pedestrian friendly.

One of the top highlights was visiting the various districts including Chinatown, Little India and Kampong Glam.

Hopping on a traditional bum boat offered a unique perspective of the city as we were able to learn more about its colorful history on our guided tour.

One of the highlights was drinking Singapore Slings at the Raffles Hotel where the drink was invented. Paying 27 Singapore dollars allowed us to sip on this wonderful cocktail and throw peanuts on the floor.

Singapore is impressive by day but really shines at night. Many of the standout landmarks have a completely different look when the sun goes down and the bright lights of the city emerge.

When it comes to street food Singapore ranks favorably with Korea, Malaysia, Taiwan and Thailand. Hawker centres offer up a spread of Asian delights that were heavy on flavor while being light on our wallet.

In order to cover as much ground as possible we purchased hop on hop off bus tickets to get around the city. Being able to get on and off whenever we wanted was a real bonus as it helped us preserve our walking legs.

Although we saw many of the most popular attractions such as Merlion, Marina Bay and the Fullerton Hotel it was the adventures we had wandering around that formed the greatest impressions of the city.

Overall, our time in Singapore was distinctly memorable. Hopefully, we’ll have a chance to come back again soon to explore more of this impressive 21st century city state. 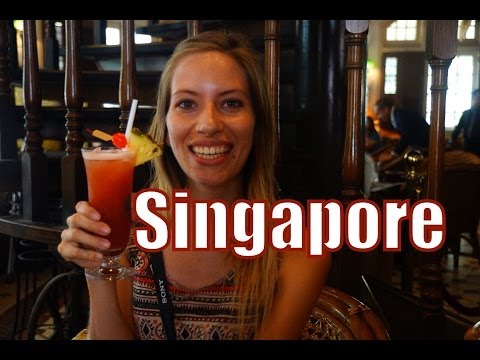