If you have trouble viewing this video click here: http://youtu.be/M9RTyrtGpro

On day five we said goodbye to Ruegen island and hit the road once again stopping first at Stralsund. This Hanseatic city is steeped with history and is a UNESCO heritage site because its roads and city grid have remained the same over the years. With just a few hours to explore we got to see some of the impressive brick architecture, visit a fascinating museum dedicated to German playing cards and eat a Bismarck Herring sandwich for lunch. We left wishing we had a few more days instead of hours to linger.

Our final stop for the day, after being on the road for a while, was at Freilichtmuseum Klockenhagen. This open-air museum featured farm animals, theme rooms and rustic collection of artifacts. Our favorite activity was testing out the old bicycles including a Penny Farthing.

So this morning we’re going to be visiting the city of Stralsund which is known for its red brick buildings. Apparently, the city dates back to medieval times and it is considered a UNESCO world heritage site because a lot of the roads are still exactly the same as what they were hundreds of years ago. So we’re going to take a walking tour of the city and it should be lots of fun.

The city of Stralsund was founded back in 1234 and it was a Hanseatic city that conducted trade in the Baltic Sea. During our walking tour we learned a few interesting facts including that Stralsund was once a huge producer or playing cards. That they have one of the best examples Gothic red brick architecture and that they made one delicious Bismarck Herring sandwich.

Okay, so you seem to have found some food. What are you having? I sure have. I’ve found something called Bismarck Herring and it is the form of a sandwich. And it is one of the most famous things here you can have in Stralsund. So I’m going to take a bite of this. I’m really excited.

That is such a juicy and it is kind of almost a bit sour kind of fish. It is quite tasty. I like it.

So I’d like to point out that many celebrities, presidents and even royals have eaten at this restaurant including the one and only George Bush.

Half a day was not enough to do this city justice but hopefully these clips help capture the feel of the place.

Okay, so this afternoon we are visiting a place called Freilichtmuseum Klockenhagen. And it is basically an outdoor open-air museum where we can see what life was like a few centuries ago. So it is a cute little village. There is some farms and farm animals just roaming around so I think we’re going to take a walk through, see what we find, maybe visit a few of the different workshops that they have here. And yeah, just have a good afternoon.

Something interesting we’ve been doing on the property here is they have these different theme rooms. We’ve checked out a classroom and over here we have different kinds of old old farming equipment. Check it out.

So this reminds me of bingo. You know how you have to roll the little thing and pick out the number. But according to this little sign here this machine was used for sorting potatoes depending on their size. Bingo, potatoes same thing you know.

And this right here would be called a Penny farthing by the British but in German it is called hochrad which I think means high bike. And yeah, I have no idea how you would get on one of these and then pedal down without toppling over. Would you like to attempt that? Well, there are some bikes available just out there if you dare.

How am I going to get off? I’m going to like fall on my face. I’ll help you. When you want to get off let me know. Go ahead. Really? I’m scared. Are you? I don’t want to. Alright, so you’re on top of one of these bikes. Now it looks like it is going to be a bit difficult to ride so. I can sit here and look pretty. There you go. Hey, at least you made it on it. Rock back and forth on it. Come on and look at the camera. I look like a chicken.

It looks like we’ve found something a little more manageable. What have you got there? That’s kind of a rattling old thing. How does it compare to a normal bike? Ah, it sounds very rusty. Is it like unstable? It is easier than the penny farthing I couldn’t get on.

Ready? So this lovely little throne is called a Strandkorb and basically it is a beach chair. So here up at the Baltic Sea it is kind of windy even in the summertime so people need a little bit of protection so they can enjoy their holiday and maybe tan without getting too cold. So yeah, these little baskets are pretty cool. And you can pull this out so you have a place where to rest your feet.

And they also have a fancy little shelf so you can enjoy a glass of cold beer.

I’m adding this to my resume. 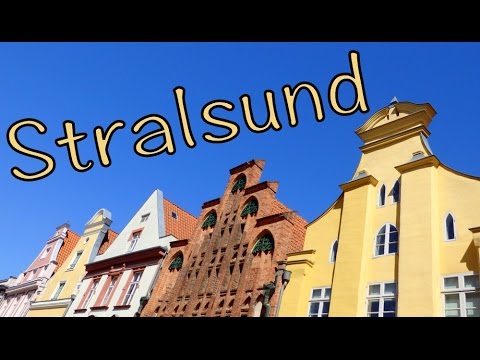