This is an adventure travel video of a Thai snake show I witnessed while travelling in Kanchanaburi, Thailand. Thai snake performances are held in various locations across Thailand. These snake shows are typically put on for a chiefly farang (foreigner) audience.

I’ve been to two shows, in different locations, yet the format of both performances was nearly identical. The snake show begins with a PA announcer lamenting about how dangerous the performance is and the risks associated with the human performers: “It’s verrrrry scaaaaarrrrry” Next a portrait of a man is shown; apparently, this is somebody who died during a performance. The first time I saw this I had butterflies in my stomach; however, with this second show, I naturally grew a little bit skeptical about the authenticity of this message. I would go as far as to say I highly doubt this man (or the other man shown at the first show) were necessarily deceased stunt performers.

The show consists of a variety of different acts. More or less, it involves a Thai trainer agitating the snakes, who in turn, viciously strike out in fear/anger as the trainer tries to maneuver and avoid getting bitten. At first it’s just one snake versus one man. The grand finale of the show is a series of three smaller snakes on the platform all at once with a Thai man attempting to catch all three with his mouth. I have to admit that was highly impressive; although, I doubt the snakes particularly enjoyed it.

There are a variety of different snakes including King Cobras, jumping snakes and Pythons.

My overall impression of the show was mixed. Although, it was entertaining in some ways, I found myself feeling apathy for the snakes who were clearly the victims of this performance. The snakes weren’t necessarily being tortured (nor were they killed) but they were being aggressively taunted, chased, grabbed, bitten and stretched. 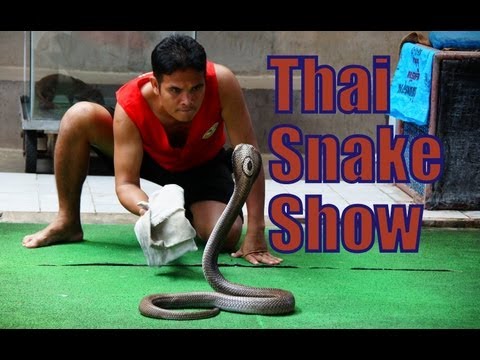