In our latest travel video we return home to Chiang Mai via Thai Railways on a train journey departing from Bangkok, Thailand. Oddly enough, it seems as though we’re taking a train ride in Thailand every other weekend of late – even though we’ve decided to base ourselves for a while.

During our time in Bangkok, Thailand for a travel blogging conference – DIA (Digital Innovation Asia) – we experienced torrential rains that at times flooded the city. One time we went out to eat with other travel blogging friends at a small little outdoor stand when we got trapped in a storm with water up to our ankles. At one point, I nearly sprained my ankle as I could not see what was in front of me very clearly.

Anyhow, our journey back home via train was also a wet and rainy affair; it was challenging for me to focus on the scenery outside of the window with my camera, so I instead used the water droplets in the foreground for creative effect. In Chiang Mai, we’ve been a little spoiled having mostly avoided rain; given that it is rainy season we’ve expected a lot more.

We’re both quickly realizing that the dining cart is our favorite place to hang out on the train – especially for those longer journeys. This time was no different as karaoke style Thai music was playing in the background as a mixture of locals and farang (Thai for foreigners) enjoyed occupying all of the seats. As enjoyable as it is to eat a meal, I think we both appreciate being surrounded by people and having the opportunity to observe their behavior.

On this particular journey, one of the main reasons we enjoyed the dining cart on this particular journey had to do with the company we were keeping in our sleeping berth. It was a really young crowd of early twenty something travelers who were loud and noisy the entire night. Not being considerate of others they spoke with booming voices, laughed like hyenas and got up frequently disturbing other passengers. I understand that they were young, but I still can’t believe they didn’t have the social wherewithal to realize they were annoying others. The dining cart proved to be a nice quiet refuge for a while.

One of the challenges of long train journeys is killing time. It’s easy enough to be preoccupied with the scenery outside – or even a good book – but after a while we’ve found ourselves going a little bit stir crazy. Luckily we slept for most of the trip, but when we were up we enjoyed playing silly games, such as word association where we asked each other random words and had to give the first thing that came to mind without hesitation.

Overall our train journey lasted 17 hours as it was three hours behind schedule. We stopped frequently and it appeared the train itself was having issues. When we finally arrived back in Chiang Mai it felt like a breath of fresh air. Returning home is always a great feeling. 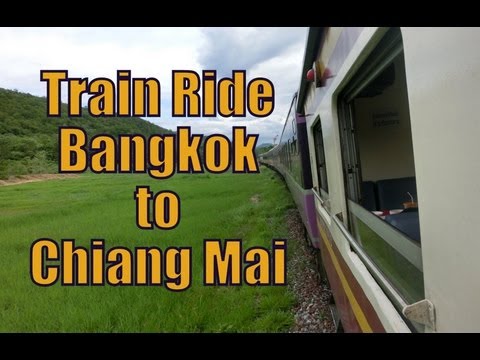