Taking the train in China from Hong Kong to Guangzho en route to Guilin travel video.

Well, it’s hard to believe but our time in Hong Kong has already expired. Today we’re taking a train ride. Where are we going? We’re crossing over into China. Hong Kong, of course, is a part of China but this is a Special Administrative Region, so we’re actually going through immigration to get into Mainland China today. This is the first time we’ve taken a train where we’ve had to go through immigration to cross somewhere, so this should be interesting.

We are in Guangzho. Apparently there are two train stations. We arrived at the one that is on the East End of the City and we had to get across town to the other and it was difficult but we need to keep going.

So right now we are in Guangzho station waiting for our train to Guilin. And we happen to be waiting in the VIP room.

There is no tea in this tea room.
We’re going to Guilin.
Uh, we’re looking for number ten.

So we’re in the dining cart now getting ready to have dinner. Let’s see what is on the menu if we can even read it. We barely got a seat here.

Decision time. So we did manage to find an English menu which makes things a lot easier.

So this is the friend fish with a sweet and sour sauce. It’s got some pineapple on top And then we have the pork with tofu over here which looks really tasty and some rice to go along with it. And of course a beer. Sam had to get his beer.
Taking the skin off. Trying to get at the meat. There it is. Mmmmm. It’s nice and salty.
Well, how are you enjoying that tofu? It’s not bad. It’s really spicy.

Good morning. We are almost in Guilin. Our train has been delayed about an hour and a half. So we’re just hanging out in the dining cart. Breakfast isn’t being served for some reason so we’re just enjoying what is left over of our snacks from yesterday, so a few salty peanuts. These little hazelnut cakes. Water chestnut cakes? Yeah. And that’s about it. 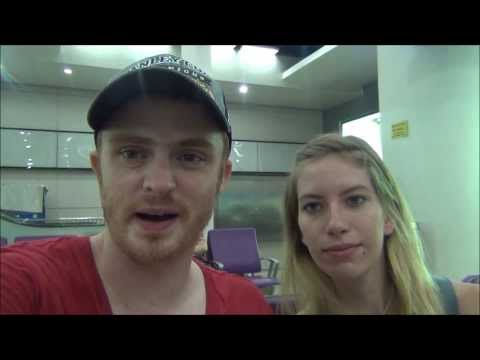