Recently we had experienced a train derailment en route from Bangkok to Chiang Mai, Thailand. In hindsight, we felt shell-shocked and our initial sense of feeling naively safe and secure traveling by train (as opposed to any other method of transportation) is something we no longer take for granted. However, even though the accident is fresh in our minds we still prefer taking the train more than flying or taking the bus from point A to B.

Arriving at the train station in Istanbul, Turkey we wondered if we’d even be able to board a train. The station itself was heavily under repair and certain sections were nearly abandoned. After a few minutes of clueless wandering we finally found a ticket booth where we secured tickets for several days in advance.

On the evening we were set to depart the train station was nearly empty. In fact, our first leg of the journey would be by bus as parts of railroad are also under repair. As we sat down waiting to catch our bus we were joined by a young mother cat and her adorable kittens. On the floor next to the chair was a bowl of cat food and water. Istanbul, is a city where cats are as much a part of the community as people. As cat lovers ourselves, we wish the care and attention stray cats receive here (food and petting) was more commonplace all over the world.

After dozing off in the bus we were awakened by our driver who announced we had arrived at the train station where we would finally actually be boarding our train. Our compartment was a tiny space where six of us would be sleeping for the night. Three bunks on each side of the confined walls – with no space for extra luggage – was the intimate environment we’d all be sharing for the next 14 hours. Crammed like sardines in a can this was anything but a luxury train journey.

After conversing with several of our bunk-mates we drifted off into a deep sleep only to be awakened several hours later at the border. To get stamped out of Turkey we all shuffled out of the train, climbed over several sets of tracks and waited inside of a small building about the size of a spartan cafe. On the way back from Bulgaria to Turkey, the Immigration officer slept in and we all waited for him to arrive for nearly two hours. His sheepish almost apologetic face was much like that of a teacher or professor who was late for class. it’s the first time I’ve ever been stuck at a border because of a lack of official personnel.

After immigration procedures were completed we drifted back to sleep almost immediately and when we woke up the landscape had changed drastically. Shades of orange, auburn and yellow of the forest occasionally gave way to small rustic rundown little towns. We had arrived during the fall – my favorite season. The scenery reminded me of Canada and I felt instantly nostalgic.

This was the perfect journey in many regards: 10 hours of sleep and stunning fall views outside of our window. However, we had made an error miscalculating we’d be able to buy food on-board the train. Equipped with a package of dates and walnuts – snacks Audrey doesn’t enjoy – the collective grumbles of our stomachs made us less tolerant of the fact our train was going to be two hours late arriving.

Overall, we really enjoyed taking the train from Turkey to Bulgaria. We would do it again; however, not without snacks and plenty of water 😉 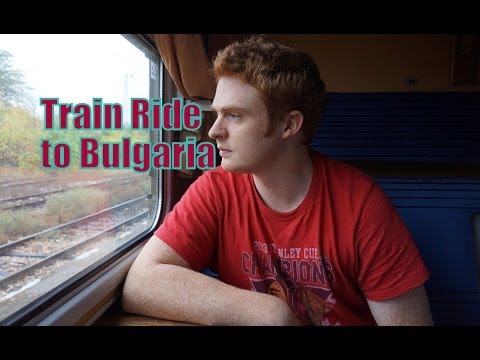