Our latest adventures have us leaving Thailand en route to Finland where we show you our tuk-tuk and train ride from downtown Bangkok to Suvarnabhumi Airport; flight with Turkish Airways from Bangkok to Istanbul; our Turkish delight breakfast in the morning; flight with Turkish Airways from Istanbul to Helsinki; and finally our bus ride from the airport along with our walk to our hotel in Helsinki.

Our excitement levels were through the roof as we gathered our backpacks and belongings from the Amari Watergate Hotel in Bangkok and hopped on a tuk-tuk that would take us to Makassan station where we boarded a short commuter train to Suvarnabhumi Airport.

At Suvarnabhumi Airport we had a bit of time to kill before our flight, so we ended up grabbing a quick meal at subway and surfing online to pass the time time. Suvarnabhumi Airport is one of the largest and most modern airports I’ve ever set food in; it’s beyond massive in terms of its scale. We decided to walk the distance of the airport a few times over and I’m certain we covered a decent amount of kilometers in the process. One particular point of criticism is the internet wifi. We were only given a one hour free pass which is quite stingy compared to other world class airports; moreover, the connection was terrible, as we were getting a connection strength that rivaled 90’s dial up speeds.

Our frustrations with getting work accomplished online soon subsided as we boarded our flight with Turkish Airways bound from Bangkok, Thailand to Istanbul, Turkey. This was the first time either of us have flown with Turkish airlines and we would not be disappointed. The service, food, seats and state of the art passenger entertainment technology had us feeling thoroughly impressed. The service started out with skewers of Turkish delights being brought over to passengers; this was a serious treat! Not long after we reached our cruising altitude speeds, our main meal was wielded out to us. The meal consisted of humus, bread, meat balls, sauteed vegetables, and a pastry dessert. On board meals are not always tasty (and sometimes almost seem inedible) but this meal was first class all of the way. Snacks, beverages and a breakfast were follow ups on what was an eight and a half hour flight. The service honestly couldn’t have been any better, as it seemed like were constantly being fed and refreshed throughout the entire duration of the flight.

We arrived in Istanbul, after a silky smooth flight, at the wee hour of 4 am local time. With over three hours before our final flight to Helsinki, Finland, we ended up roaming around the airport and eventually settling on a package of Turkish delight as the most affordable and tasty option for breakfast. Turkish delight, are cube sized squares consisting of a gel of starch and sugar often including chopped dates, pistachios, walnuts or hazelnuts bound within the gel. The cube sized bites are often coated with a layer of icing sugar to prevent the pieces from sticking together. I had first heard about these tasty treats while reading The Lion, The Witch and The Wardrobe as a youth. They’re one of my favorite desserts that I’m seldom able to have given they’re scarcely found in Canada or across Asia. Although, this was hardly the breakfast of champions from a nutritional standpoint, we certainly enjoyed polishing off this entire box of treats; luckily we still have three other boxes which we plan to share with friends and family if we don’t give into temptation.

As our boarding time approached, we couldn’t help but notice the sizable group of Finnish soldiers (wearing military fatigues) in our waiting area. Our final flight was an uneventful thee hour jaunt. We ended up sitting next to a well traveled Finnish girl who gave us some suggestions on how to travel on a budget in Finland; mainly, we all agreed that would be difficult to do considering Finland is the second most expensive country in Europe to visit only having to supplant Norway for the coveted number one position.

After arriving at the Helsinki Airport, we marveled at how small and efficient it was in comparison to some of the massive transportation behemoths in Asia. Getting into town was straightforward, as we took the local bus number 615 from the airport to the main downtown train station for 4.50 Euros. From there we reached our hotel on foot passing by many fascinating landmarks along the way. Our nearly 24 hour journey was finally over. 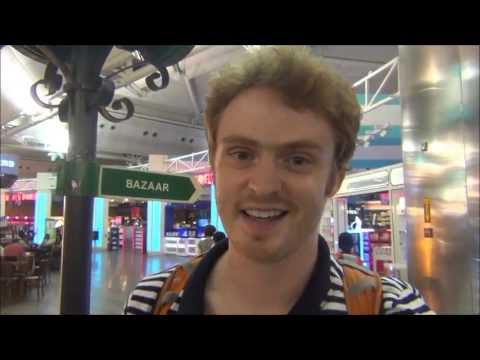