If you have trouble viewing this video click here: http://youtu.be/n0GfhJtNYiQ

Come join us for a full Northern Irish (Ulster Fry) breakfast in Belfast, Ireland. Our breakfast consisted of soda bread, potato bread, rashers (bacon), sausage, beans and fried egg. What’s cool about most restaurants that sell it is the fact that you can order it just about any time of day. For this particular taste test we ended up having it for our lunch 😉

Breakfast time in Belfast! So since we’ve been in Ireland my favorite meal has been breakfast. And it’s been a full Irish breakfast. We’re now in Belfast and over here it is called an Ulster Fry. It’s slightly different from an Irish breakfast which we’ll explain later. But it is a very complete breakfast, it has a lot of different things including bacon, sausage, eggs, potatoes, tomatoes and a whole bunch of other stuff which we’ll show you in a bit.

It is time for a grand tour of the meal. Breakfast has arrived. So we’ve got soda and potato bread over here. We’ve got our fried egg. We’ve got something that resembles a hash-brown. We’ve got our sausage, our bacon and of course our beans. So that is a very complete meal. Yeah. I hope you’re hungry. Yeah, we sure are.

So what I find really unique about the Ulster Fry is that you get potato bread and soda bread which are breads that I’ve never really tried before. But they are quite nice and compact. Very heavy. You know, you’re getting your carbs in early in the morning.

It looks quite thin but it is really heavy. Starchy.

And then this is the soda bread. I’m not really sure if you’re supposed to put butter and jam on it since it is more of a savory bread but it is really good on its own.

So my favorite part is the sausage. And what I like to do is dip it in with the beans. And I think they call them rashers here. Yeah, they are called rashers. Sam eating rashers.

Mmmm. How are they? That’s awesome. Mmmmmm.

Something that I love about the Ulster Fry and Irish Breakfast is that you can pick it up almost any time of day. We typically have it for breakfast but if you get a craving for it at night you can pop into a restaurant that specializes in the dish and you can have yourself some.

And to wrap things up how about the price point? Okay, so we got this breakfast in downtown Belfast and paid 4 Pounds and 50 Pence which I think is pretty decent. And I imagine if you get it out in the suburbs it might be a little bit cheaper because this does look like a really popular place. 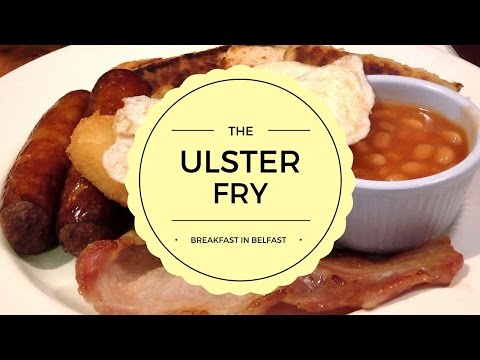