One thing we enjoy most about travel is sampling new foods from foreign countries.  I would say 9 times of out 10 we instantly like what we try; however, there are those kinds of foods that are an acquired taste or simply a taste that neither of us is ever going to learn to love.  While in Queensland, Australia we decided to take a Vegemite taste test.  Having watched several videos on Vegemite before, where those sampling it had very polarizing reactions, we weren’t sure if we were going to like it or not.  Come find out in our latest travel food video how we reacted to sampling it for the first time.

For today’s food challenge we are trying Vegemite for breakfast. This is really popular here in Australia and we received lots of comments on YouTube of people asking us to try this. Let’s see how we like it.

Before we eat the Vegemite I’m just going to read a little bit of information about it. It says Vegemite is a dark brown Australian food paste made from leftover Brewer’s Yeast extract with various vegetable and spice additives.

Apparently, Vegemite is quite healthy. It has got B1, which is essential for brain function; B2, supports your nervous system; B3, essential for energy release and folate helps to fight fatigue. But the question is does it taste good?

And I was also looking at the Vegemite website and it says Vegemite is a nutritious and undeniably delicious start to the day. Now, I’m not really convinced because I’ve watched some people eat this and the reaction is just disasterous. We’re going to try it out and see whether we like it or not.

We’re slathering on that butter here. This isn’t going to be thin. We’ve got a thick amount here. Before we spread this bad boy sauce all over our toast let’s have a little sniff test. Wow, that is strong! Very repugnant.

Alright, let’s put some of this on. Wow, that is really thick and dark. It is almost like a Nutella spread here. I think it is supposed to be a thin layer. Ooops.

Alright, it is time. Time for the first bite. I’m going to take a big massive bite. There is no wimping out here. Just a giant bite of this.

It’s freakin’ awful. I wouldn’t give this stuff to my worst enemy.

I think Sam put on way too much Vegemite, so I am making my own toast. Or bread actually because I don’t like toast my bread.

I’m not going overboard here. I’m just putting a very thin layer like I was advised by Australians. Hopefully this tastes better than what Sam had. What you’re doing is wimping out. No way.

So here we go – my first bite of Vegemite ever. I also have a glass of Mango juice nearby in case I need it. You know what? I think I may it the right way because this is not awful. I can actually eat this for breakfast. It is just a little bit salty but it is not as overpowering as Sam’s reaction.

I ate my bread with butter but I’ve also heard Australian’s say that you can eat this with avocado, so I think that actually might taste nice. Maybe we can try that next time.

So I have to say a thumbs down. I’m giving it a thumbs up. There are a lot of foods that I’ve tried around the world that other people can consider strange or an acquired taste. Quite often I’m the one who likes them whereas Audrey doesn’t. A good example of that is Salmiakki in Finland, which is a very salty black licorice, which I loved and Audrey hated. But this is something I don’t think I would ever like to eat. Arrrwwww it is awful.

Well, surprisingly I did enjoy this stuff so I guess I’m going to be eating for breakfast. And since we have two jars I may be bringing one home back to Canada for my family. Get ready. 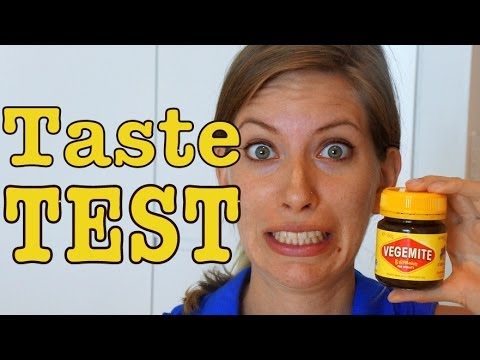