Having trouble viewing the video? http://youtu.be/sytWYURhLKY

This is a travel video of us celebrating the first snowfall of the year in Canada where we’re living in Kingston, Ontario. Having been abroad in warm destinations during the past several Canadian winters, we just realized we haven’t experienced snow since our teaching stint in Korea when we first met. With rapidly dropping temperatures we’re faced with one of two decisions: to embrace winter or to sit inside and complain about it. Given that we’re not traveling much these days, we plan on doing as much outside over November, December, January and February as we possibly can. We’re not sure if we’ll ever live in Canada again, so our emphasis is to relish every moment.

Just outside of our apartment in Kingston, we show you trees and fallen leaves covered in snow as well as a football field further off in the distance. Our goofy outing wouldn’t have been complete without a snowball fight or making snow angels. After about 10 minutes we ran back inside for hot chocolate given the subzero temperatures and harsh windchill factor.

We woke up this morning to a blanket of white. The clouds were hanging low and there was snow on the ground. It is our first snowfall of the season, so it is pretty exciting.

We’ve been traveling in really warm places for the last two and a half years, so we haven’t experienced a proper winter and now that we’re back in Canada we’re going to relish every moment of it. Let’s go outside and play.

Are you going to throw a snowball with a stick at me? Yes.

Well, we’ve been outside for maybe ten minutes and I think that is all we can handle now, so I’m going to run back indoors and have some hot chocolate. 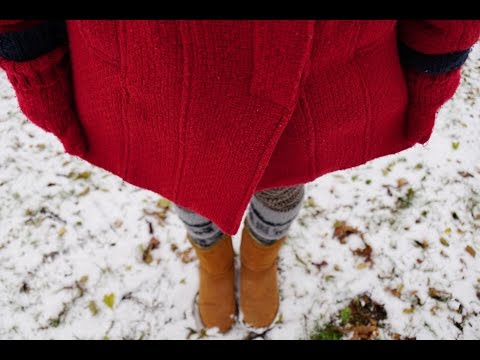