One of the most famous landmarks in all of Bangkok, Wat Arun, is surprisingly deceiving.

Known as the ‘Temple of Dawn’ Wat Arun is on many Thai postcards being peddled to tourists.

1) From a distance the temple appears to be gray and a little drab; however, up close in person, it is very ornate.

2) This is easily the steepest temple I’ve ever climbed. Once again, from a distance there would be no way of knowing this.

With steps that would have been more appropriately designed for a stilts than human feet, we ascended and descended the stairs with our eyes looking to the side (as opposed to down) and at times slinking on our butts. It wasn’t pretty but neither of us came tumbling down. In other words, mission accomplished.

The temple itself is fascinating both from afar and up close. It is definitely worth the price of admission and should be on our shortlist of things to do in Bangkok.

We boarded a river taxi, one of our favorite ways of getting around Bangkok, to visit one of the most iconic landmarks of the entire city.

This is the Temple of Dawn located on the west bank of the Chao Phraya river.

I’m already sweating profusely and now it is time to go climb this massive temple.

I’ve seen Wat Arun a few times while traveling down the Chao Phraya river. It is really interesting because from a distance it just looks like it is a grey temple made out of concrete but once you actually get here and walk up close to it you can see all of the intricate little details like it is made up of broken tiles and ceramics. It is really cool. It is a bit of a surprise.

And it gets even steeper.

That was easily the scariest set of stairs I have ever climbed. The steps were like this high and they were only this wide, so your feet could barely fit on there. I had to come down seated the whole time – like just on my butt.

Some tips for visiting Wat Arun. First, make sure you bring tonnes of water. We brought two water bottles and we’ve just guzzled them. I swear, I’ve sweated about half of my body weight. And second, even though it is a really steep climb – even if you’re afraid of heights like I personally am – it is still worth going up. The views are amazing. 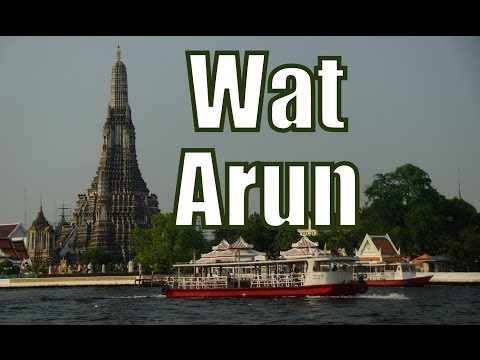