Given that it was a Buddhist holiday in Bangkok, Thailand, we decided to visit Wat Saket Temple (The Golden Mount Temple) as an afternoon outing. Initially our travel plans were to check out Wat Arun (also known as the Temple of Dawn); however, our queasy stomachs (after a bad episode of food poisoning) were suggesting we go somewhere a little closer. Without knowing at the time what we’d end up doing we got off at the final stop of our water taxi. As we exited, I pivoted and turned to my left noticing a temple not too far off in the distance. Instantly, I remembered this was Wat Saket, also known as the Golden Mount Temple, a place I had visited several years ago. Immediately, we went from not having any plans to having an exciting option; one of the true joys of travel is just letting things spontaneously flow. As we set off on foot to reach the base of the temple, we quickly realized this wasn’t an ordinary day. A plethora of street vendors lined the curbside selling everything from grilled fish to cotton candy. Tuk-tuks, taxis and a sea of people were all making their way towards the temple. I couldn’t help but think of how quiet this place was when I visited several years ago; instead of feeling annoyed by all of the hustle, bustle and commotion, I started to feed off of the energy while feeling excited. As inched closer, a group of Thais were throwing coins into a large basin. Bang, plonk! Many of the coins didn’t make it in as they ricocheted off the side of the basin. A little further on, a series of inanimate objects resembling the 12 Chinese zodiac signs lined the wall nearby the entrance of Wat Saket. Each animal had a small donation box where one could slip a coin into a small slot. My personal sign is the rooster / cock; as I reached in my pocket I found a 1 Baht coin to contribute. I’m hoping it’ll bring me good luck 😉 I’ve never visited a temple on a religious holiday and as we started to make our way up the steps we inched ever so slowly given the crowds in front of us. Luckily, an artificial mist was being blown in our faces which helped cool us down. A series of bells (I believe called Buddhist ghanta) were being rung by those passing by; naturally, we wanted to try doing this as well. When we reached the top we were treated to breathtaking views of Bangkok. Although there would be better vantage points from atop high hotels in the downtown region, the views from Wat Saket offer some of my favorite in the entire city. Finally we made our way back down. The experience of participating in a religious festival made us feel more like locals and less like tourists. Although, neither of us is Buddhist, we’re both culture vultures; thus, having the opportunity to experience a special event like this was a real treat. Wat Saket (Thai: วัดสระเกศราชวรมหาวิหาร) is a Buddhist temple that was originally built during the period when Ayutthaya was the capital of Thailand. The temple is now one of the more popular tourist attractions in Bangkok. 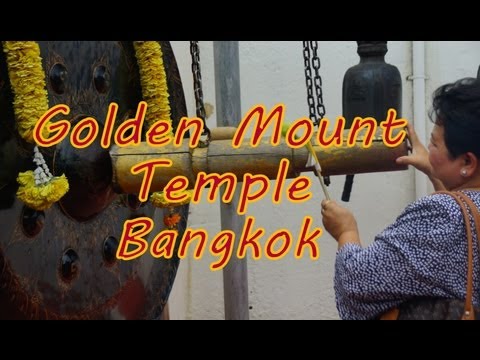