On a quest to explore downtown Bangkok, Thailand we boarded a water taxi for a boat ride along a canal nearby Chao Phraya River to visit Wat Saket Temple (also known as The Golden Mound Temple).

In Bangkok there are a number of diverse options when it comes to different modes of transportation.

When it comes to the cheapest way of getting around, local (non air conditioned) buses are the most common and one of the easiest ways to get around the city. Typically they’re red and I’ve taken them to locations such as MBK shopping mall and Chatuchak Saturday open market. Although they’re not the most comfortable way of getting around Bangkok, the opportunity to save money and rub elbows with locals is certainly appealing.

There is a variety of ground transportation options available in Bangkok, some of which include taking a taxi or a tuk-tuk (auto rickshaw) where you can travel just like a local. I chose to take a tuk-tuk when traveling to nearby areas versus, however, if you’re going a further distance (such as when going to the airport) a taxi is a more convenient and comfortable ride. When we arrived in Bangkok the other day, we ended up taking a tuk-tuk from Khaosan road to our Bangkok hotel which was the beautiful Amari Watergate which we thoroughly enjoyed. The luxury accommodations offered at the hotel were top notch and the location was close to several great restaurants where we enjoyed delicious food throughout the duration of our trip.

Finally, the last (but certainly not the least) way of getting around Bangkok is to hop on board one of the many water taxis plying the various canals and the main river (Chao Phraya) that meander throughout the city.

Originally, we had planned on visiting Wat Arun; however, we’ve recently been dealing with a serious case of food poisoning and considering the distance involved we decided on visiting Wat Saket (Golden Mount Temple) which we could easily cover in a short day trip via a water taxi not far from our hotel.

As we boarded the water taxi we sat down on a wooden plank that resembled the kind of seating platform I remember using when riding a canoe as a youth. Quickly the taxi filled with mostly Thais (of all walks of life including Buddhist monks, businessmen and students) and few other Farangs. As we started to move, a lady wearing a crash helmet started traipsing along the outer frame of the boat collecting money from passengers. Our fare, which involved going several stops, was only 10 Baht ($0.33 USD).

As the boat started to pick up speed a blue tarp was suddenly lifted to prevent water from splashing into the boat and soaking the passengers. Aside from the inconvenience of being splashed, I believe the real reason was to prevent the contaminated filthy water from causing anyone to get sick.

In front of us I noticed a couple of young Thai girls (likely in middle school) giggling while making ‘V shaped’ poses and taking photos. They looked back at us, several times with ear to ear grins; most likely they were surprised to see a couple of pasty white gringos sharing a water taxi with them.

The journey itself didn’t take long at all. Taking the water taxi is a great way to avoid the gridlock of downtown Bangkok where other vehicles, pedestrians and stoplights can turn a quick jaunt into a painfully slow ordeal.

For those interested in taking the water taxi there are thirty-four stops along the Chao Phraya extending as far as Nonthanburi and Samut Prakan. 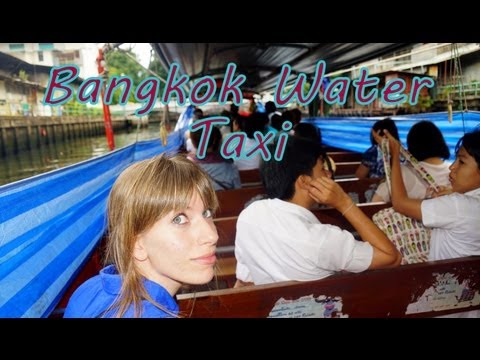