A trip to Boryeong for the Mud Festival is an event that attracts people from both near and afar. Popular with both foreigners and Koreans, you’ll meet people who have came to Korea specifically for the event, foreign teachers based in Korea, US military and other expats.

Aside from just beach time, muddy adventure sports and listening to live music, you’ll notice people engaging in a host of other activities.

One event I stumbled upon randomly was a wrestling match taking place between a group of foreigners who formed a large circle.

It appeared most of the participants were drunk; however the wrestling was good nurtured with plenty of smiles, laughing and cheering from all those involved or just watching.

Prior to each match the two combatants would stare each other down and perform a ridiculous ‘intimidation routine’ before finally lunging at one another.

It appeared many in the group were friends; plenty attention in particular was given towards a guy named Drew who was wrestling another guy wearing a purple headband.

One of the most random things during the matches was this guy carrying a retro school boombox, who was just making his way around the circle pit; meanwhile, some guy without a t-shirt on, apparently named Andrew, was following his every move and dancing around him by shaking his body back and forth. It’s was kind of funny but even more parts strange.

Andrew also participated in the wrestling matches losing both times. On one particular clip you’ll notice he looks so stunned/drunk that he forgets to move when the match begins.

Overall, it was a bunch of sweaty guys having fun, wrestling, swearing, dancing, and cheering; I was there like a fly on the wall capturing it all with my camera and camcorder. 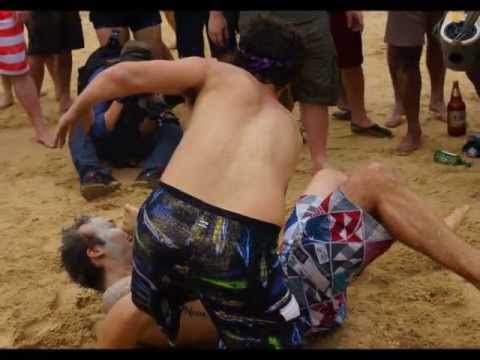