It’s easy for a sports nut to get their fix in Australia with a plethora of diverse events on offer throughout the year.  From sports events popular the world over, including the rubber burning glamorous motor racing event such as the Grand Prix to the uniquely Australian AFL, there is something literally for everybody.  These are three particular events not to be missed! 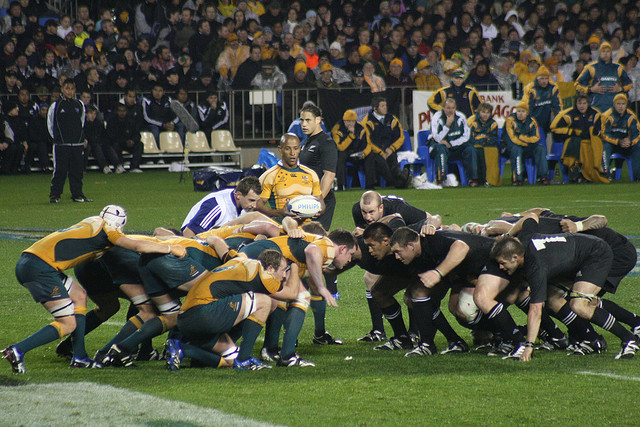 Australia & New Zealand have the kind of sports rivalry that is legendary & nothing exemplifies this passionate competitive prowess more than the rugby union’s Bledisloe Cup.  It’s not just another match when Australia’s Wallabies face off against New Zealand’s All Blacks with the pride of two countries at stake.  Two of the world’s rugby giants line up against one another to determine which nation is really top of the Tasman.  The event has been held ever since 1931, when Lord Bledisloe, New Zealand’s then Governor-General, donated the Bledisloe Cup.  The pride of two countries is at stake when Australia’s Wallabies face New Zealand’s All Blacks. Catch one of the history-making matches, where some of the world’s best players decide which country is really top of the Tasman.  The two squads now meet at least three times a year on a home & away basis.  It is possible to take in one of these unforgettable matches in Aussie stadiums, held from Melbourne to Sydney.

When it comes to sporting events, there is nothing more bigger or grandiose than the Australian Grand Prix held in Albert Park, Melbourne over the course of four days in March.  The world’s fastest speed demons race across the city at mind boggling speeds of over 300 km an hour across an all purpose track – truly an elite Formula One event.  It’s such a spectacle that musical festivals and post-race rocks concerts are held throughout the city prior, during and post race.  The track itself is a sleek 5.3 km circuit extending throughout lush Albert Park.  In addition to the main Formula One battle, racing enthusiasts will get their fix with six other first-class racing categories.  The curtain closing finale event is wrapped up with a large scale performance, that in the past, has featured legendary rock stars such as Kiss and the Who.  It’s a crowning event of Melbourne that one should pencil into their itinerary.

Are you interested in taking in a unique sporting event originating in Australia?  Look no further than Australian rules football (aka as the AFL) where this home-grown sporting spectacle is now the most attended sporting league.  With games held across major destinations across Australia from March to September there is no excuse to not take in at least one match.  Australian rules football origins date back to 1859, when the Melbourne Football Club organized matches for the first time.  What started out as small sporting event now features 16 professional teams spread across the entire nation.  Two teams of 18 players, face off against one another with the common goal of advancing an elliptical balls towards the goalposts by kicking, running and handballing.  Points are accumulated by pushing the ball through the posts or kicking the ball through the middle two posts with tackling allowed.  Some teams worth considering viewing are the ever popular Brisbane Bears and West Coast Eagles.  Join locals for a passionate sporting event that is likely to leave to a lasting impression.