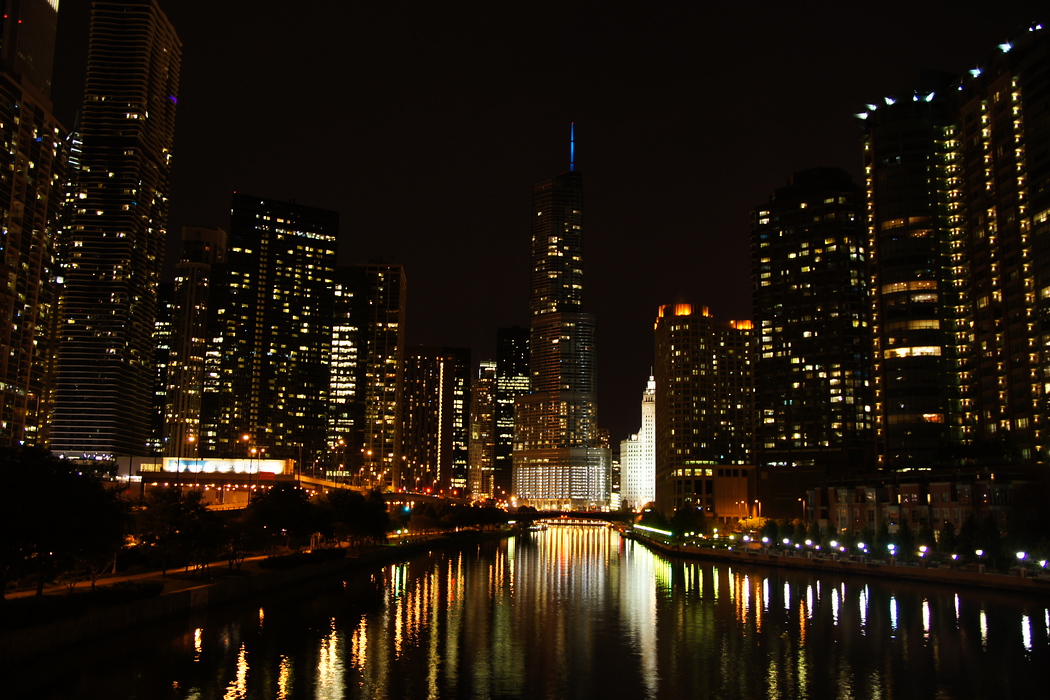 Chicago is without a doubt my favourite city in North America.  I’m a die-hard sports fanatic of the Chicago Blackhawks and Chicago Cubs having grown up thoroughly brainwashed by my father.

I had visited Chicago several times during my teenage years, but this was my first time to come back as an adult.  I was impressed by a lot of things, this time around, that I didn’t notice before with my adolescent eyes.

The incredible skyline, scenic parks and fantastic food made me fall in love with the Windy City all over again; however, it’s at night when the city really comes alive and dazzles.  The following is a photo essay showcasing the bright lights and big city views of Chicago at night: A man who bares an uncanny resemblance to President Obama spouts out water and flashes neon coloured lights from this Crown Fountain building. I stayed at HI hostel in Chicago – one of the largest and most well run hostels I’ve ever experienced in my life which was just minutes away from Buckingham Fountain. As you can see from the fountain the impressive light display and spouting water was a colourful treat for my eyes. 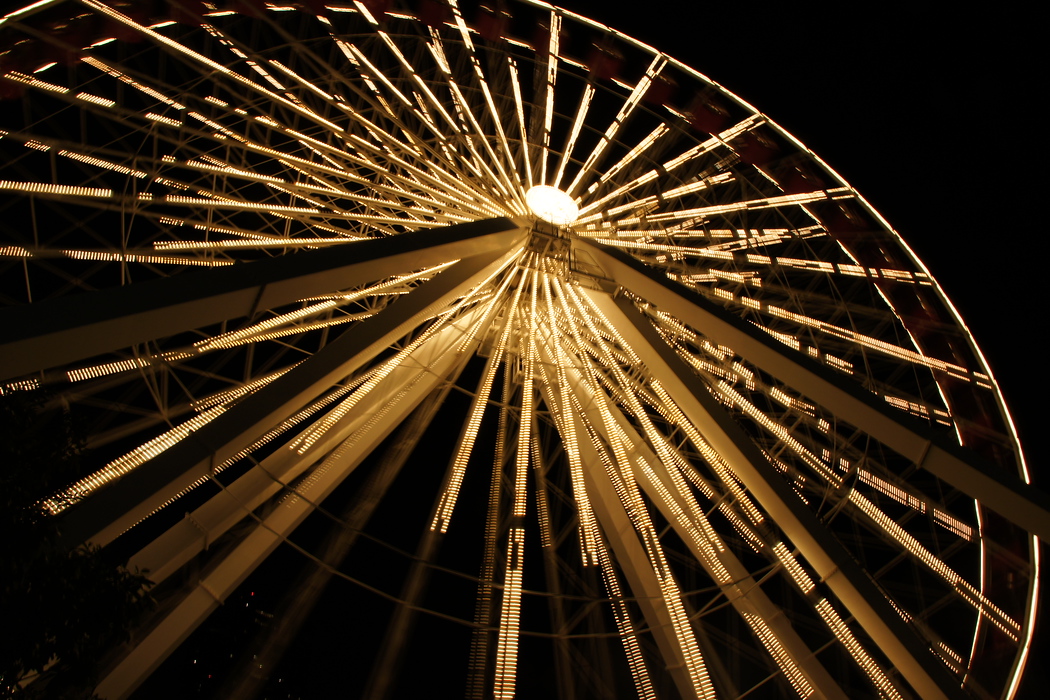 A night view of the Observation Wheel found at Navy Pier. 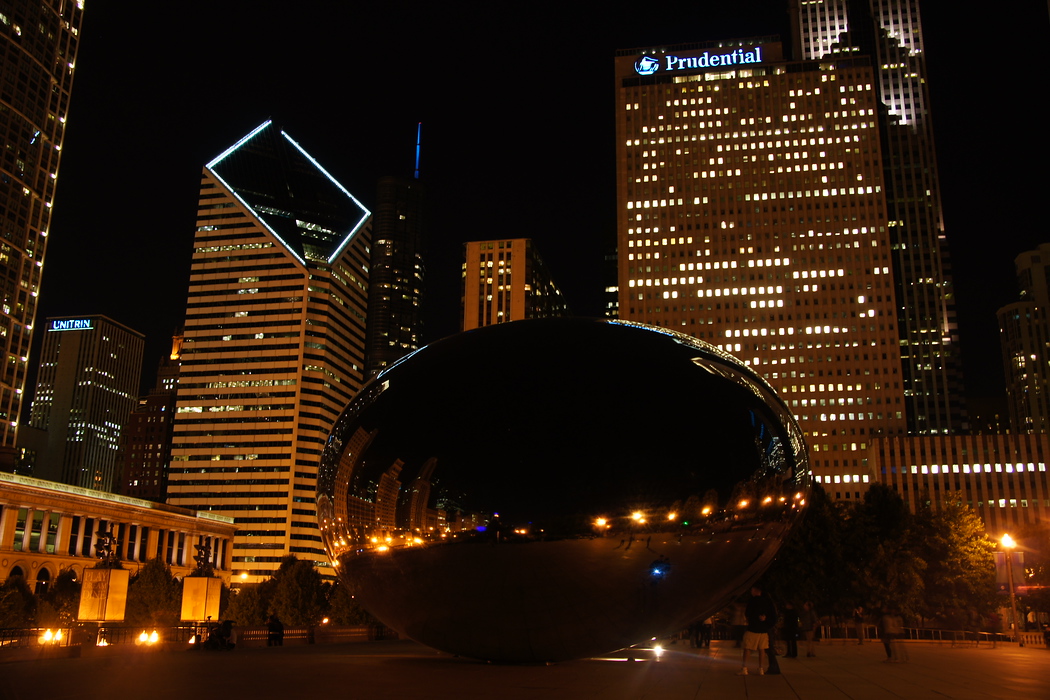 This is a perspective shot of the cloud gate at night which you’ll notice featured again in some additional shots of this photo essay.

A group of scattered individuals sit alongside a long bench taking in the impressive displays coming from the Crown Fountain. 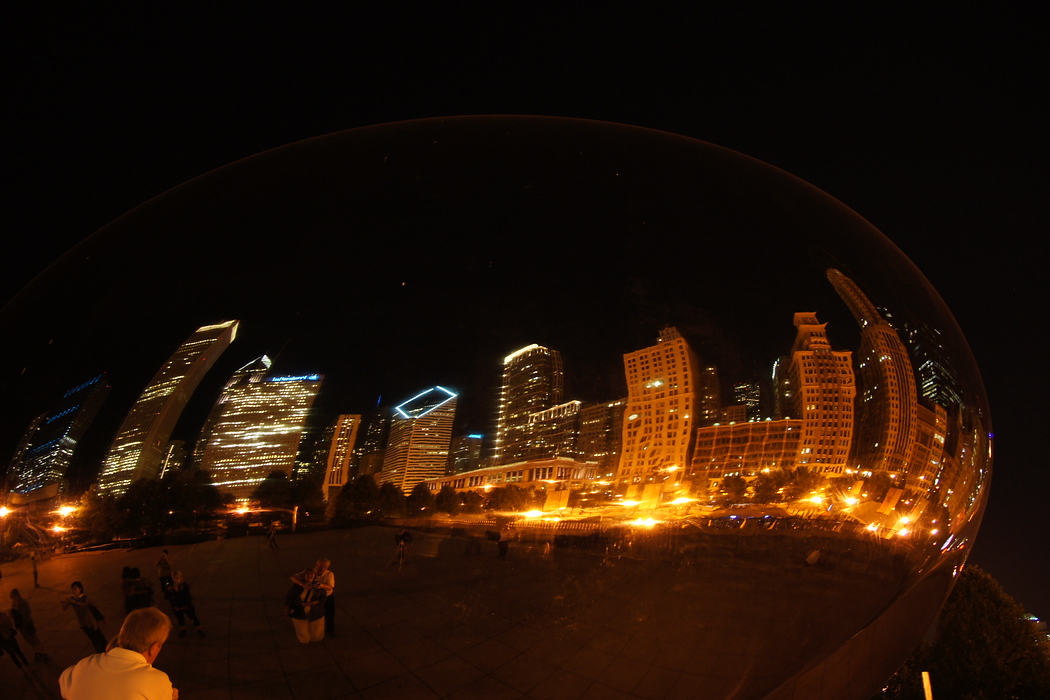 A couple embraces one another while staring back at their reflection from the Cloud Gate, known by locals as the bean.

I ventured back to the Crown Fountain late at night when nobody else was around. I had this view all to myself. 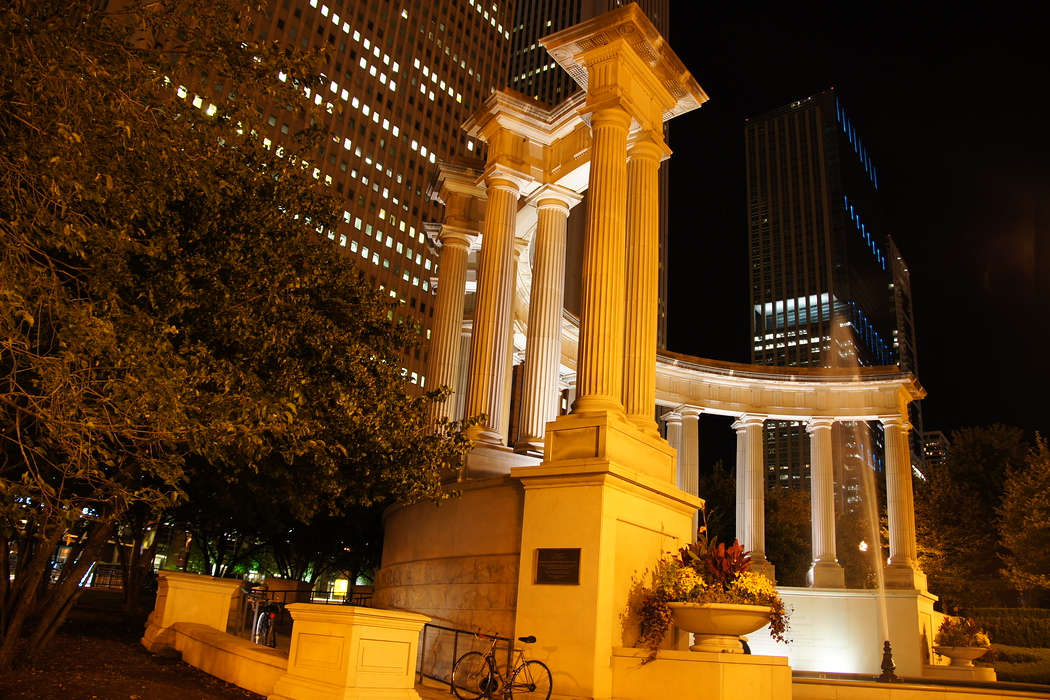 The surrounding large buildings and impressive lighting around Millennium Park made me feel safe to walk around at any time of night. 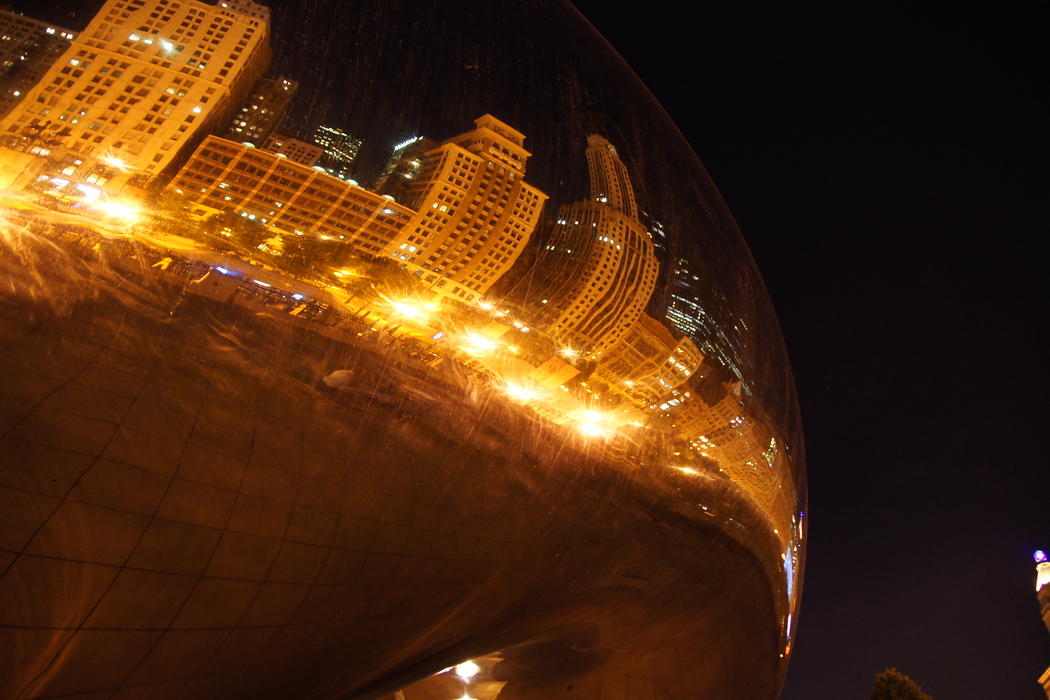 From this perspective one can see some impressive buildings reflected by the bean. 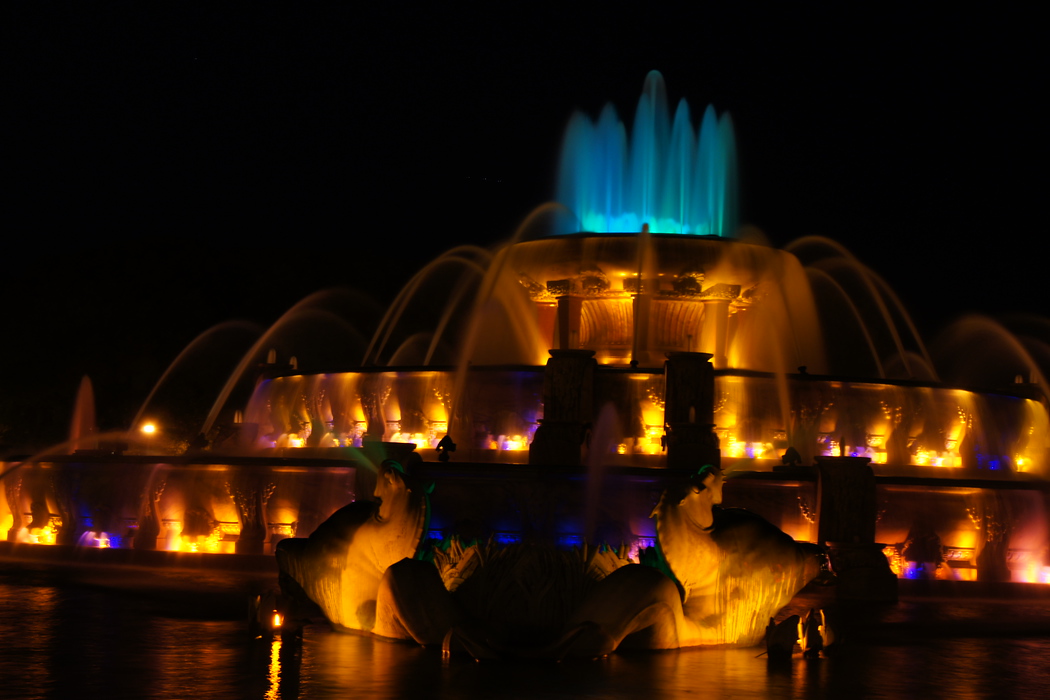 This is another view from the Buckingham Fountain.

A view of a bridge not far away from Millennium Park 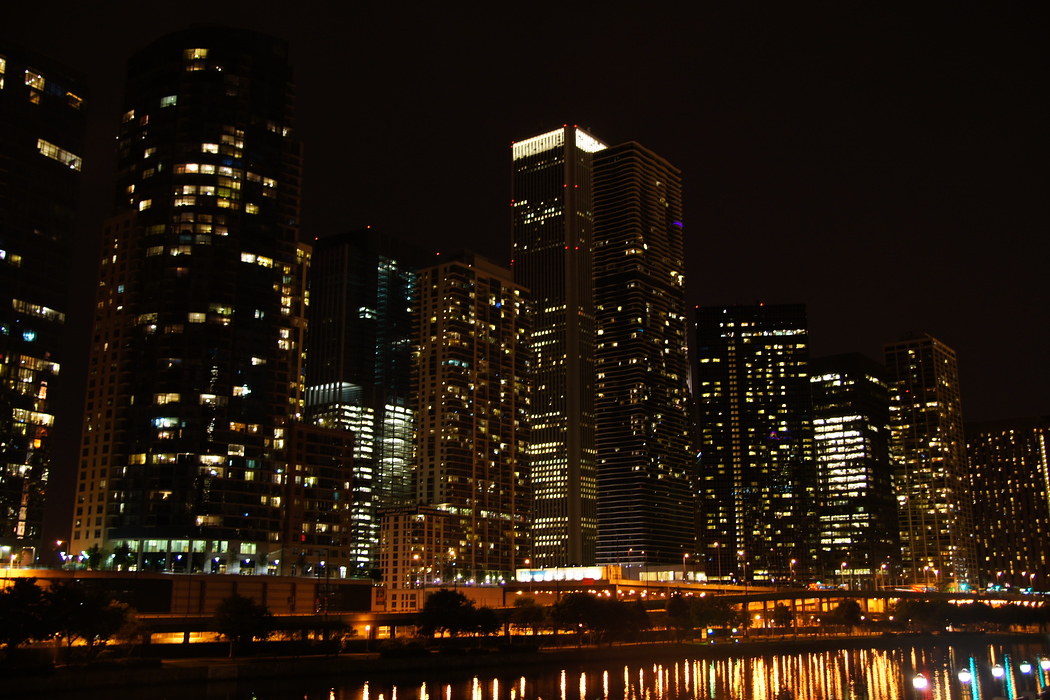 A shot of some apartment and commercial buildings in the down town area. 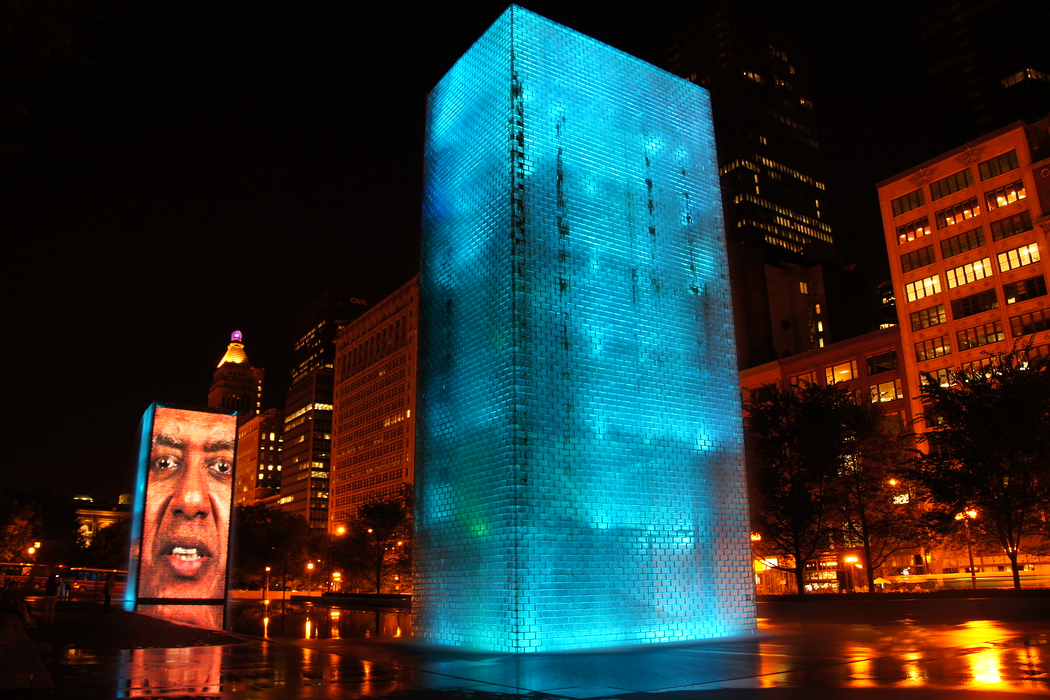 Finally, one more shot from the Crown Fountain. At this point, I think it’s safe to say I found this particular display very impressive 🙂