Living a nomadic lifestyle, over the past eight years, has meant I’m rarely been in one place when the pages of the calendar turn from one year to the next.

In the past decade, I’ve spent more time in Asia than I have in North America (Canada).

More often than not I’ve been wearing t-shirts and shorts chilling out in an exotic warm locale as opposed to bundling up in a parka and braving a Canadian winter.

However, that’s all about to change at the end of this year and I couldn’t be more excited!

To celebrate 2014 I’m heading to Edinburgh, Scotland to  participate in Hogmanay!

Aside from celebrating the New Year in style, I’m also looking forward to sampling Scottish foods and beverages including Haggis, deep fried mars bars and whisky.

I’ve never visited Scotland before and I’ve never been to Europe during this time of year!

Considering I’m part Scottish, I couldn’t be more excited to be celebrating the New Year in Edinburgh, Scotland!

After the celebrations I’ll be traveling to the Scottish Highlands for some stunning scenery. 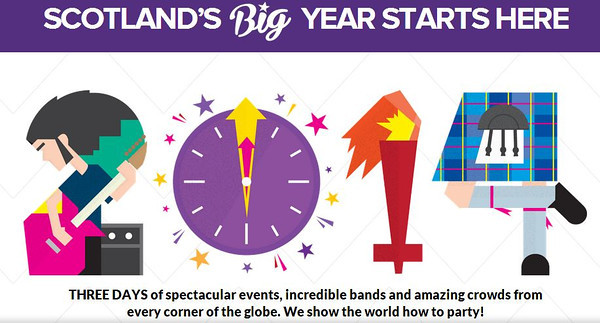 It is the word the Scots use for the last day of the year; however, unlike most celebrations around the world, Hogmanay is much grander than just a one day event.

Over the course of a three day celebration, I’ll be wielding a fiery torch in my hand as I parade across town, dancing to Scottish folk music and drinking the night away – preferably with a glass a whiskey in my hand 😉

These are the main events:

* The Street Party:   As many as 80,000 kindred spirits will be celebrating the New Year in Edinburgh with local and international bands playing across multiple stages.

* Torchlight Procession:  Did you say Vikings?  Up Helly Aa’ Vikings from the Shetlands will kick off the Torchlight processions by marching through city en route to Calton Hill.

* The Keilidh:  We’re going to party like it’s 2014!  This colossal event consists of a massive outdoor dance party where food, drinks and bogeying will all be happening aplenty.

* Loony Dook:  This event takes the cake.  Imagine, a large mob willingly clad in bathing suits (and other bizarre attire) parading down High Street with the ultimate goal of plunging into the icy waters of the River Forth.  Indeed, it’s going down.  The only question is whether or not I’ll be brave enough to join them 😉

#blogmanay is brought to you by Edinburgh’s Hogmanay and is supported by ETAG, EventScotland, Homecoming Scotland,VisitScotland, Edinburgh Festivals, Marketing Edinburgh and co-creators Haggis Adventures. Created and produced by Unique Events. As always, all opinions expressed here are entirely our own.