Thanks to the nomination from fine fellow travel bloggers Aussie On The Road & Man on the Lam I’ve decided to participate in the A-Z of travel.

A: Age you made your first international trip

I ended up travelling to the States (technically an international border) at a really young age but my first ‘real’ trip abroad didn’t occur until my junior year of college when I ventured off to Japan and Korea for the entire summer way back in 2004.  I’ve been addicted ever since 😛

B: Best (foreign) beer you’ve had and where

I’m going to cop out a little here and go with Beer Lao. It’s not so much the beer itself but more-so the cheap prices and laid back atmosphere of the country that allowed me to enjoy many of these fine beverages throughout my extended time in the country.

My favourite cuisine is definitely Korean followed closely by Thai, India and Mexican. If you haven’t guessed already from my list, I’m a huge fan of spicy food and nothing compares to the variety of cuisine I’ve found in Korea. If it can set my tongue on fire I’m game 😛

My favourite destination is India. If I can find a country where I feel more stimulated (not likely) that ranking will change, but until that time I’d love to continue going back to India time and again for a full on assault to my senses. My least favourite countries are Brunei and Ecuador. I found Brunei sterile and overpriced compared to other countries in SE Asia and when I was in Ecuador I experienced one dodgy event after another and felt as though safety and security was a real concern at the time.

E: Event you experienced that made you say ‘Wow’

Taking the trains in India was an event that certainly made me say ‘WoW’ along a whole host of other things both good and bad 😛 I felt my journeys on the trains were the highlight of my backpacking experiences in 2010 and I was able to capture a lot of high speed footage from my Casio point and shoot camera that ended up turning into an entire 7 part youtube series and finally a best of creation which you can see below:

Hands down it is travelling by train. I love how the train allows you to really interact with locals and take in the scenery slowly as you journey from one place to the next. I almost feel like I’m cheating when I take a flight somewhere, but they do come in handy from time to time 😛

The sense of freedom and escape from routines. I constantly feel stimulated when I travel – getting to experience exotic foods, cultures and interact with new people all the time. I feel a sense of stagnation when I’m not travelling, as if my life is on autopilot and I’m underachieving.

Without a doubt it’s Penang, Malaysia. I’ve visited Penang several times and it’s one of the most fascinating cities to walk around on foot because of all the colonial architecture and variety of cultures and cuisines that are part of its multicultural heritage; however, the downside has been I’ve often gone through multiple shirts throughout the day – all completely soaked and saturated in sweat.

I: Incredible service you’ve experienced and where

I’m not always a fan of the services offered by cab and tuk-tuk drivers from various destinations in Asia; however, there was this one time when I was backpacking in India that I got out of a cab in Kolkata and my money belt was dangling off of the back of my pants without me even noticing it. It surely would have fallen off while I was pounding the pavement to find the nearest hostel had the driver not mentioned it. I just felt really touched that a stranger would care about the well being of another they’ve just met.

J: Journey that took you the longest

I once completed an insane continuous bus journey from Quito, Ecuador to Puno, Peru. The entire journey (including transit time) was 68 excruciatingly long hours. I was in such a hurry to get back down to Buenos Aires, Argentina to catch a flight and meet a friend that I subjected myself to such a ridiculous conditions. I don’t think I’ve ever fully recovered from it 😛

K: Keepsake from your travels

My keepsakes are my photos and videos I store on my computer and share online with others. In my earlier days of backpacking I would often collect little souvenirs, but now I only do that for family and friends.

L: Let down sight. Why and where?

I felt let down by the Taj Mahal. It’s certainly an impressive site and somewhere I wholeheartedly recommend but I found it didn’t live up to the hype of other destinations such as Machu Picchu or Angkor Wat where I was in awe. In fact, I would recommend visiting the Harmandir Sahib in Amritsar over the Taj Mahal.

M: Moment where you fell in love with travel

I knew back in 2004 when I met a group of backpackers in a hostel while I was staying in Seoul that travel would be a huge part of my life from that day on. When I heard the stories they were telling and the kind of lifestyle they had/were living I was instantly intrigued.

The one where I didn’t get eaten alive and ravaged by bedbugs. In all honestly, I’m a serious budget traveller and I can’t remember the last time I’ve stayed in a place that would be considered luxurious. In Cambodia, I’ve at times shelled out an extra dollar or two on occasion for an upgrade in creature comforts. Having a private room with air conditioning, wifi, and a bathroom that doesn’t smell like a dead horse has just pegged it is about as good as it gets for this cheapskate extraordinaire 😛

O: Obsession. What are you obsessed with taking pictures of while traveling?

I’m absolutely obsessed with taking photos of candid portraits. I love capturing the wide range of emotions that are exhibited by people when they’re interacting naturally without the awareness of a camera. I probably shouldn’t admit this but I get just as much pleasure from a shot taken of some guy picking his nose as I do from an ear to ear grin. One doesn’t admit to that unless one is somewhat mischievous 😛

P: Passport stamps. How many and from where?

I’ve been to 26 countries – mostly in the Americas and Asia.

The crazy house in Vietnam was rather bizarre. The creator of Alice in Wonderland wouldn’t have dropped as much acid as this architect. This is part one of four.

India! You won’t need to find sights, events or experiences – they’ll find you!

S: Splurge. Something you have no problem forking over for while travelling.

I’m somebody who could spend $2 on a room and fork over $15 on meals for the day. I’ll occasionally splurge on some delectable treats. When I was in Dali, China I found the BEST peanut butter pie EVER. I’m not willing to admit how many slices I had during the five days I spent there.

Oh gawd, I’ve done my fare share of these kinds of things. In this article I documented my experiences of playing make believe for some ‘touristy’ photos with some locals in Peru.

Aside from splitting my pants in Thailand, I would have to say riding an ostrich in Vietnam!

V: Visas. How many of them and for where.

This is like asking someone how many girlfriends/boyfriends have you had? Please don’t ask because I simply can’t remember 😛

W: Wine, best glass while traveling and where.

X: eXcellent view and from where 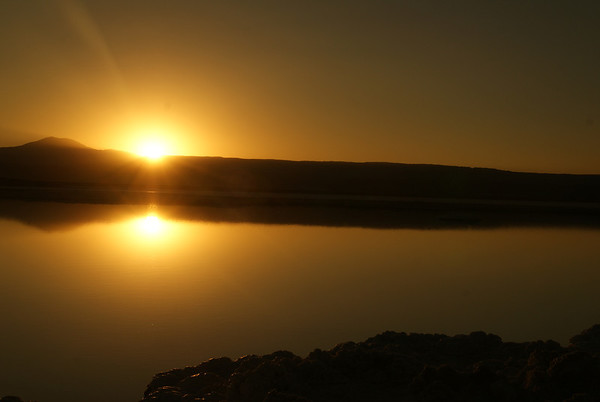 This sunset I experienced just outside of San Pedro de Atacama topped off a pretty stellar day.

I’ve been travelling continuously for six consecutive years. I’d like to continue on until I’m belly up and floating down the Bay of Bengal 😛

Z: Zealous sports fans and where

I’m an absolute diehard fan of the Chicago Blackhawks and Cubs. I’ve planned specific outings to Chicago ‘just’ to watch games and when the Blackhawks won the Stanley Cup in 2010 I pranced around the courtyard of my guesthouse in Sucre, Bolivia much to the chagrin of other European backpackers who thought I was madder than a hatter.