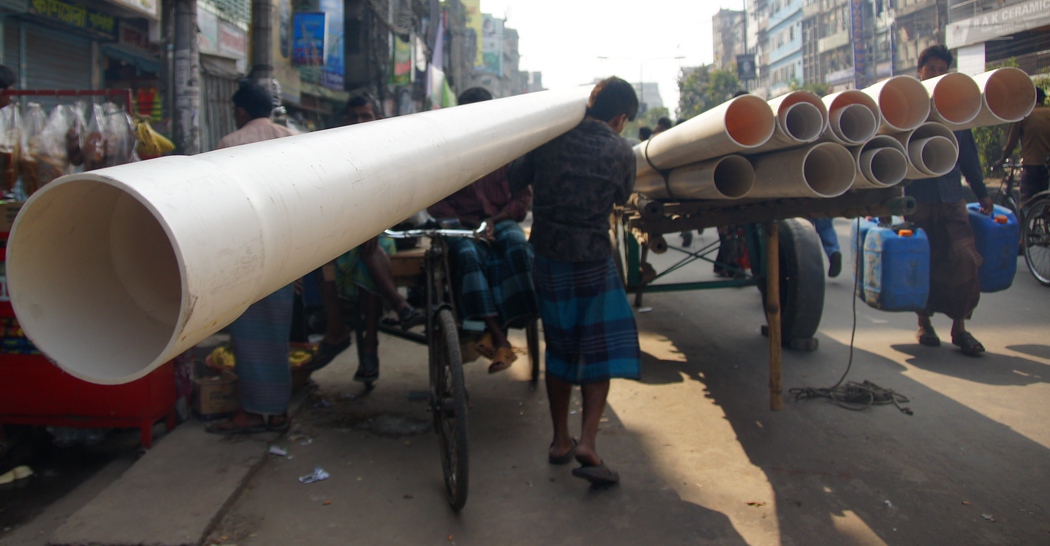 I have to be brutally honest when I admit that I had very little preconceived expectations when I arrived in Bangladesh.  Outlining my plan to travel from Rajasthan to Kolkata it made logistical sense to finish my journey across the subcontinent in nearby neighboring Bangladesh: another stamp in my passport, another feather in my cap.  When I discovered that I could find a cheap flight with Air Asia from Dhaka to Kuala Lumpur I quickly pounced on an advance seat sale.  What I never would have expected was that my only regret about coming to Bangladesh was that I didn’t schedule a longer visit.

It’s impossible not to compare India with Bangladesh.  Although India is exceptionally diverse from region to region it does share certain similarities across the board.  When I arrived in Bangladesh it was a whole different story.

As a potential tourist destination it is well off the radar and one rarely encounters other backpackers or travellers.

I found this presented numerous opportunities to interact with locals in more genuine and sincere manner.  People were literally in ‘awe’ of my presence as I roamed the hectic quarters of Old Dhaka.

I was greeted by locals of all ages and at certain given points in time I had a large following trailing behind me.  I’ll never forget that experience as long as I live.

One quickly notices that Old Dhaka is a bustling hive of activity dominated by male driven labor.  I didn’t make a typo here.  In stark contrast from India, where bright saris were seen around every corner, the streets of Bangladesh were littered with men performing blue collar tasks.  Even the main Buriganga river nearby the Sadarghat was equally as hectic.

The following photo essay captures some of the most candid moments I encountered on the street. 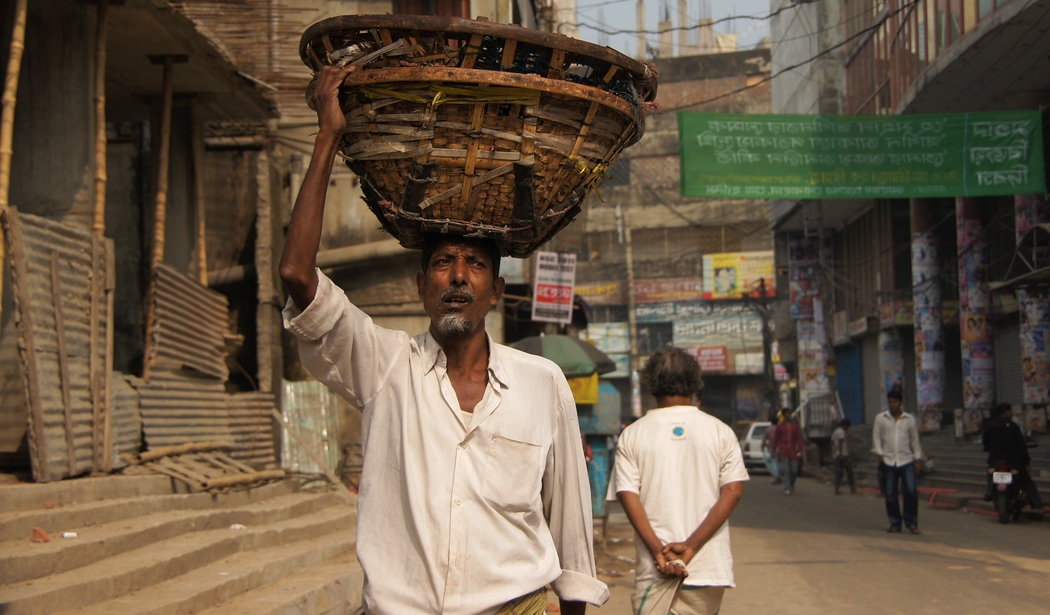 A Bangladeshi man carries a large basket on his head supported by only one arm – Old Dhaka, Bangladesh. 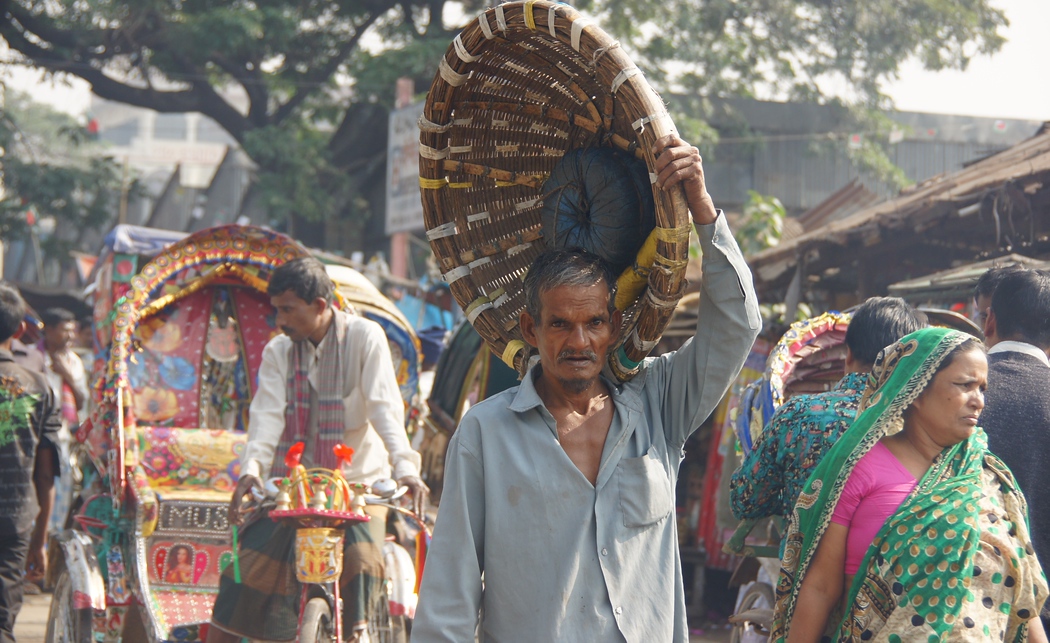 A Bangladeshi man gracefully carries an empty basket in one hand that is larger than his entire upper body – Old Dhaka, Bangladesh. 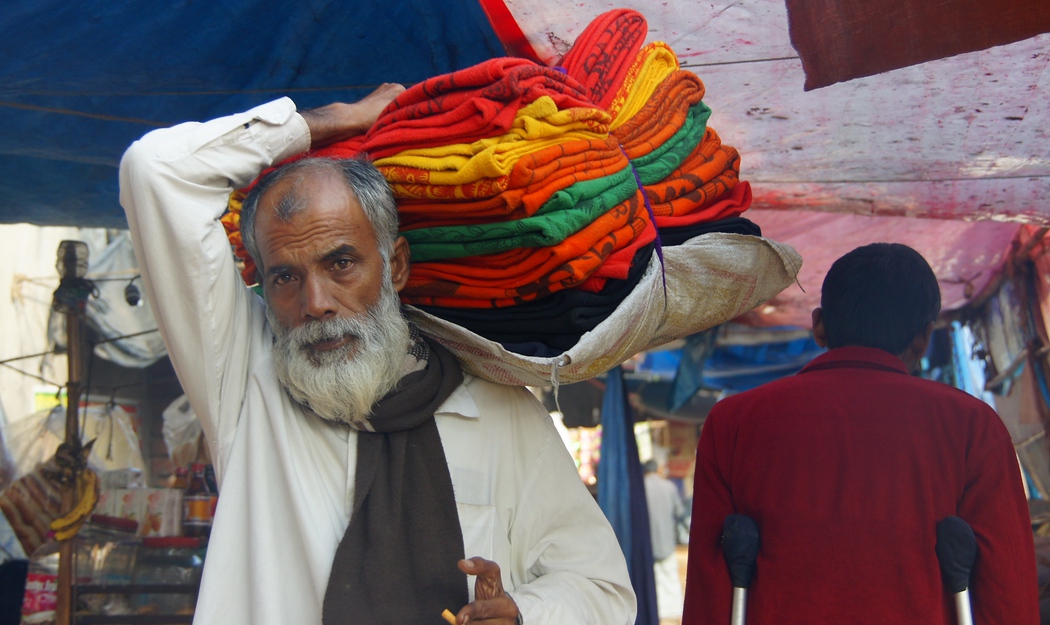 A Bangladeshi man firmly grasps a bulk collection of brightly coloured fabrics tied together in a bundle – Old Dhaka, Bangladesh. 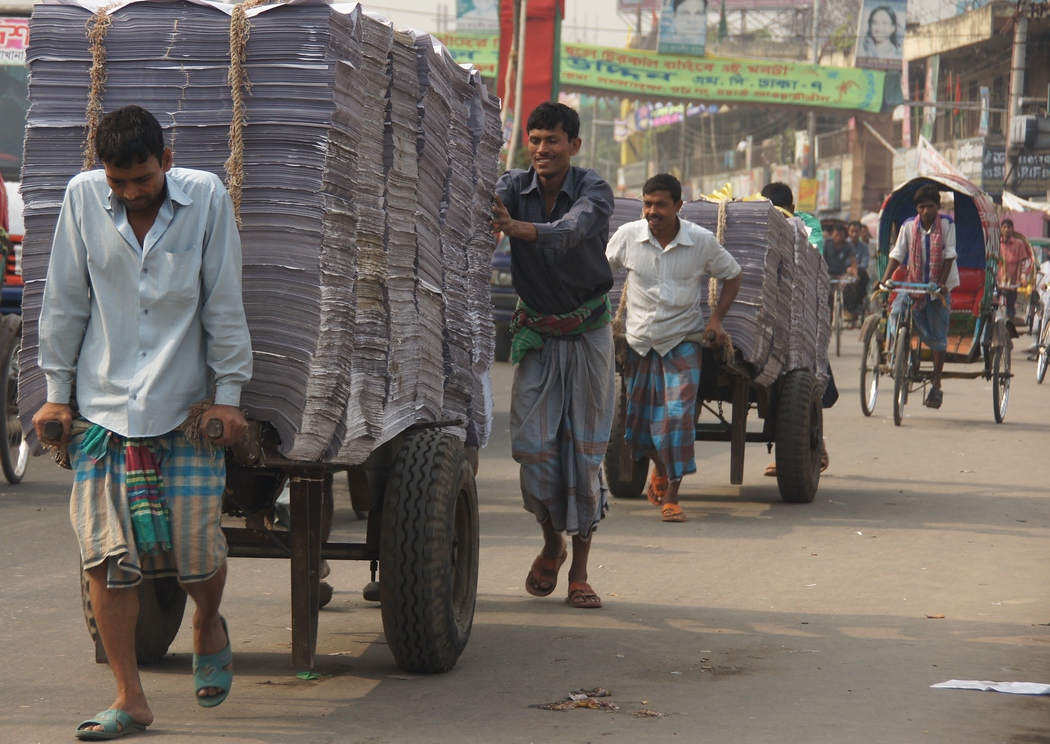 A group of Bangladeshi men haul a heavy load on a cart – Old Dhaka, Bangladesh. 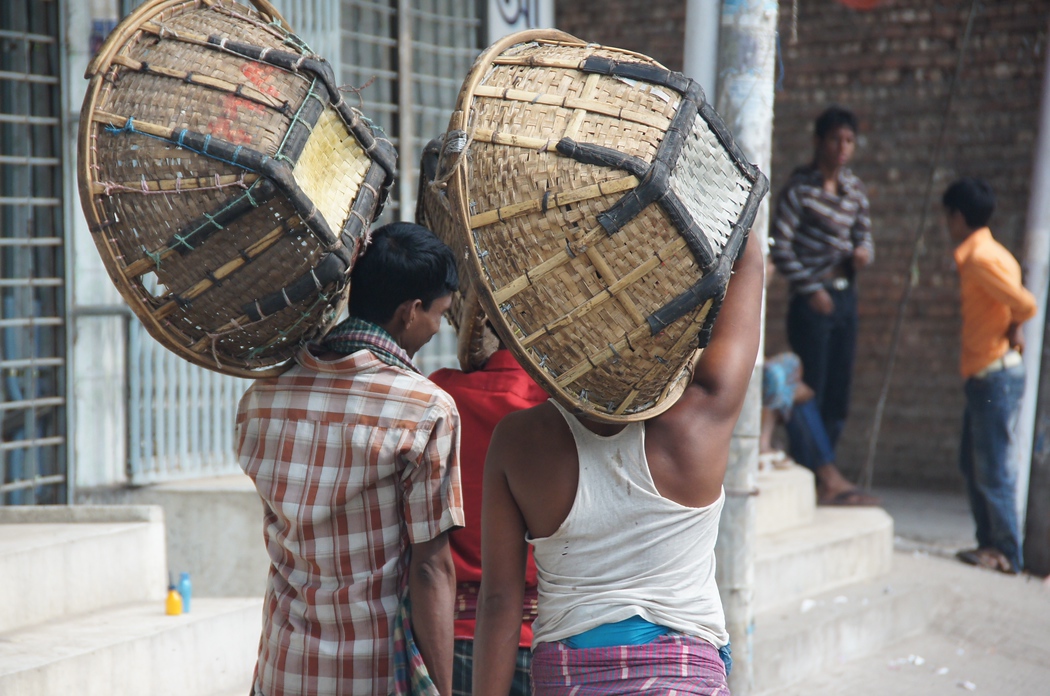 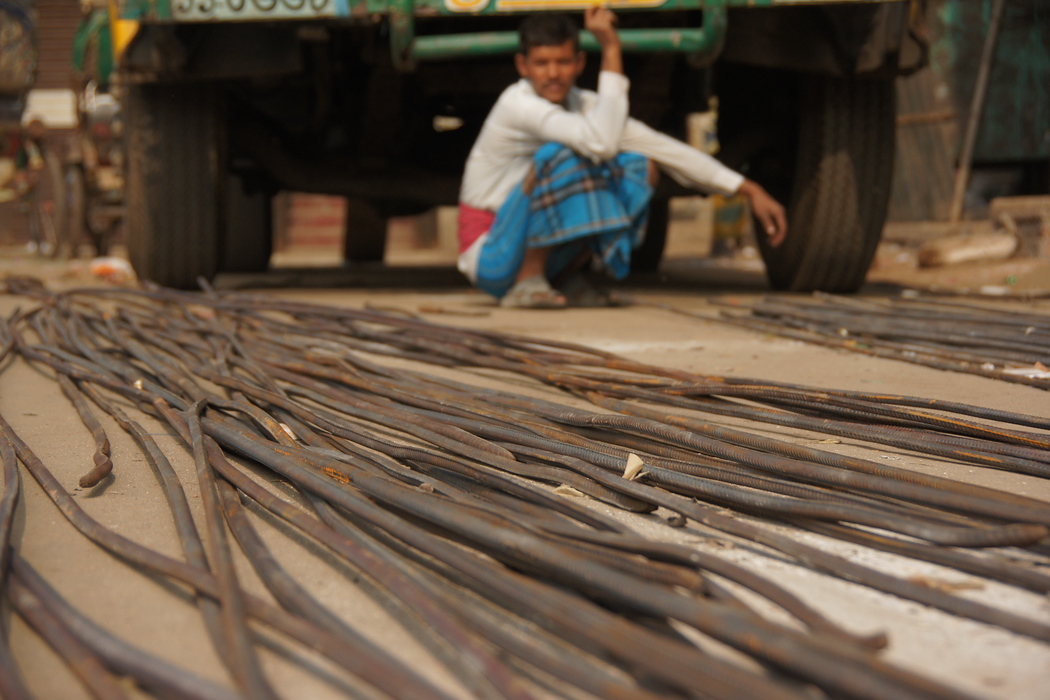 A man crouches down beside a collection of cables spread out across the ground – Old Dhaka, Bangladesh. 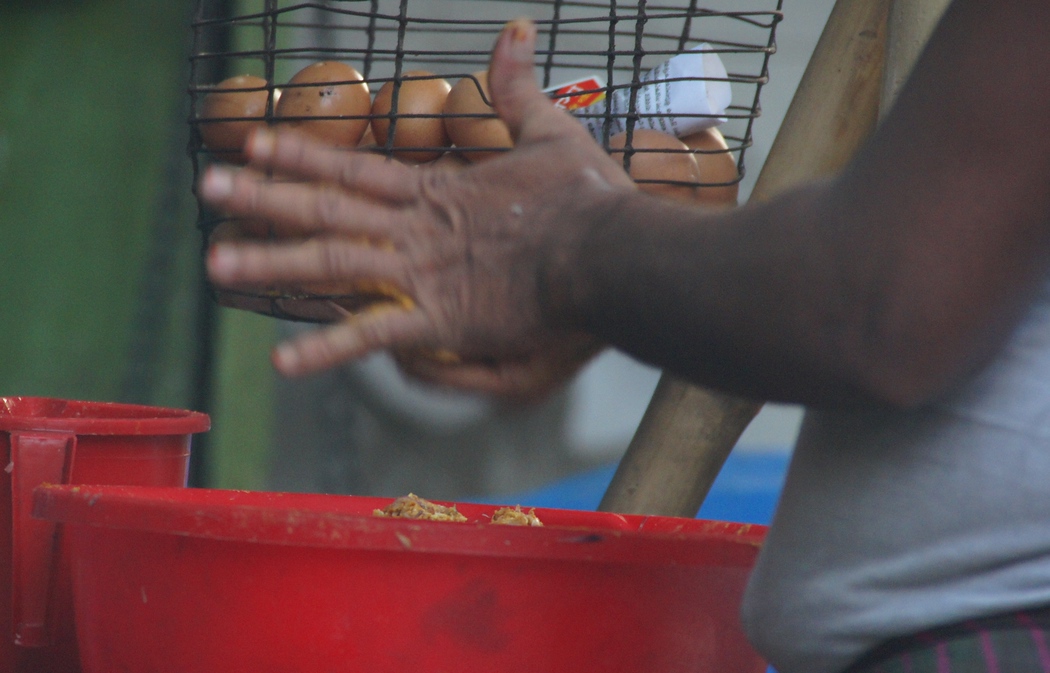 A man pounds together and moulds ingredients with his hands – Old Dhaka, Bangladesh.

A close up perspective of a cart (from behind) with a man pulling on it – Old Dhaka, Bangladesh.

A massive crowd of local Bangladeshi men gather amidst the announcement of a street side sale – Old Dhaka, Bangladesh. 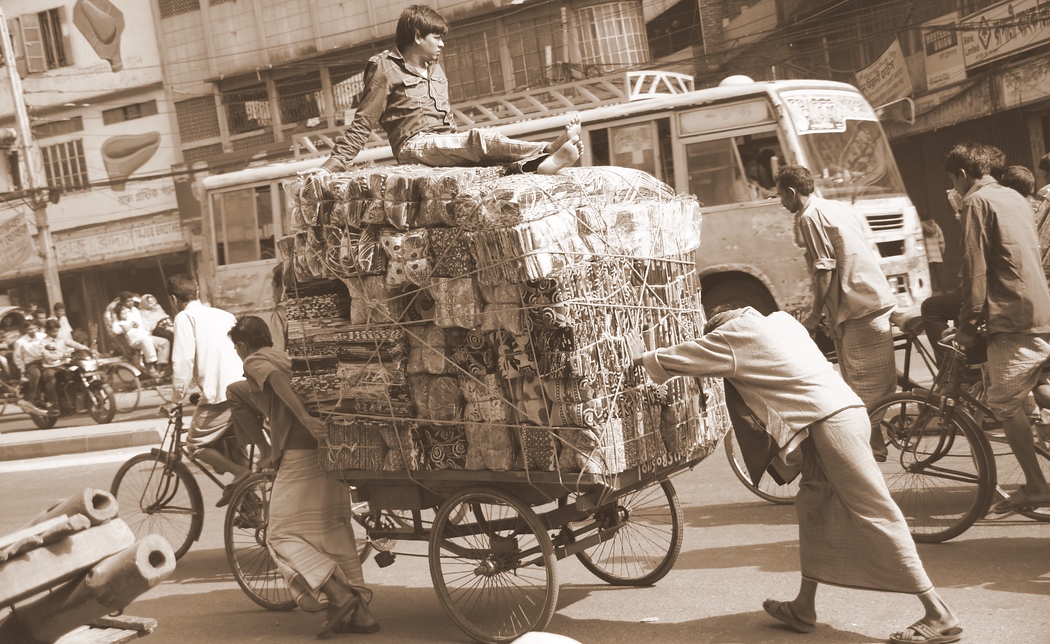 Two men push and pull a cart filled to the brim while another man sits comfortably on top of the load – Old Dhaka, Bangladesh.

A close-up shot of a man hauling several live birds in both of his hands – Old Dhaka, Bangladesh. 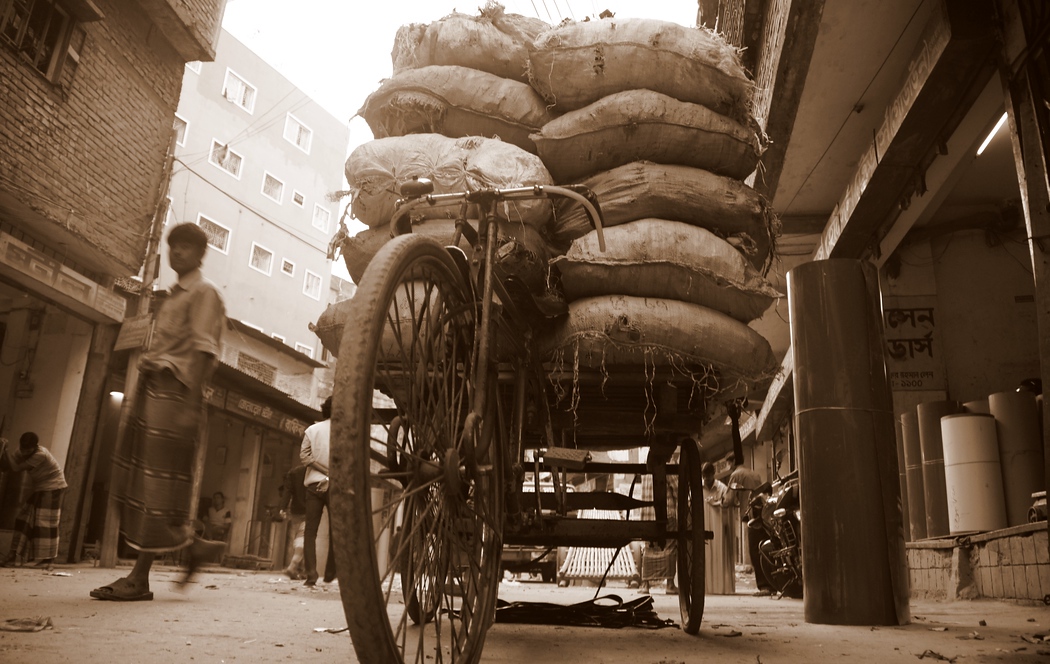 A makeshift bicycle turned into a rickshaw bares the weight of a heavy load that appears to be way beyond capacity – Old Dhaka, Bangladesh. 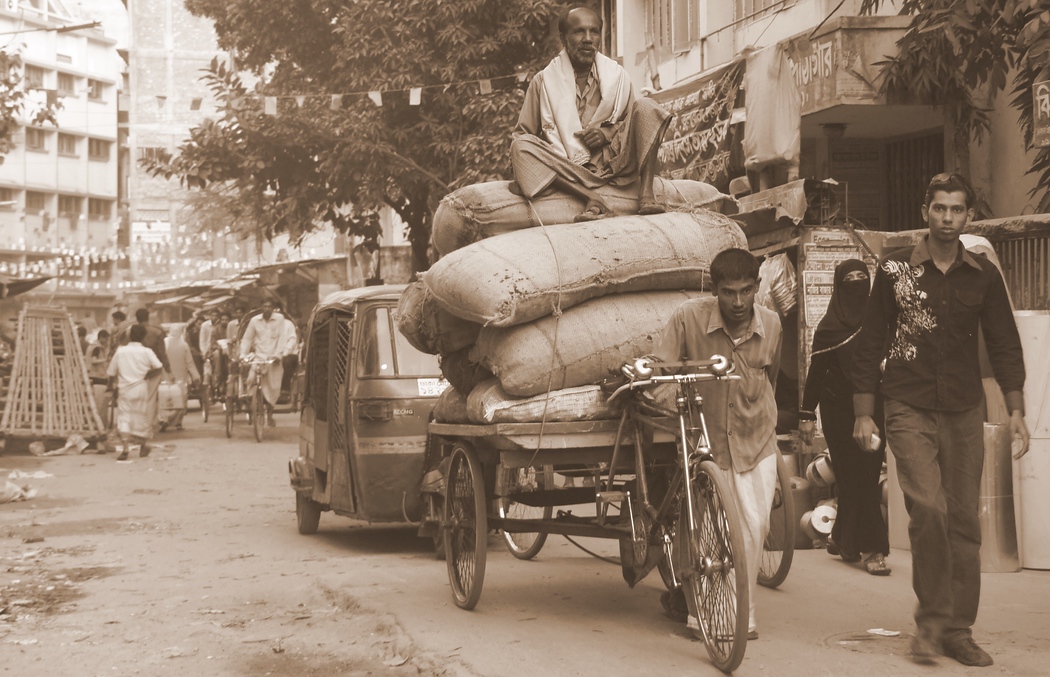 A man sits high atop of a large load on a rickshaw as a man in front of him is burdened with the task of moving everything forward.