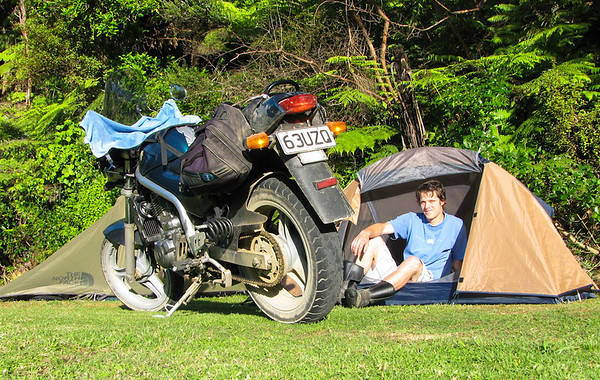 I’m looking back at this event because it was a good night, I got solidly drunk and I didn’t spend a dime until I left to go home. It’s rare that you luck upon open bars, but I always try to make the most of them when given the opportunity. So I was happily off my face and on my way home when some guy on the street asked me for money. His name was Jesse, and he was from Vancouver, and he was on his way to another part of Canada, for some reason – the details escape me. I do remember that he was asking for money to stay at a hostel in town, that he said his mum was going to be wiring him money later in the week, and that he was going to be able to pay me back.

I wobbled back and forth, and then slurred, “What’s your name again?”

After Jesse had repeated his story I patted him on the shoulder and said, “Jesse, I think I have $10 in my wallet, would that help?” Jesse affirmed that it would help so I continued, trying to place my words in the right order while maintaining my balance on the sidewalk, “I’ll have a look in my wallet, if I have $10 you can have that, if it’s $20 then you’ll have that. I don’t want you to repay me, but I’d love to hear how you get on. I’ll give you my email address.”

I got my wallet out, opened it up and it was empty. I looked in one side and the other, nothing! Nothing but old receipts and someones business card. I remember Jesse exclaiming something about ‘no money’, not in an annoyed way or even a particularly dejected way, more just in surprised realisation that this drunk guy was probably as lost as he.

I was surprised too, but then I remembered why, and in a triumphant gesture I unzipped the hidden middle fold and whipped out my only note, a $20. I handed it over to Jesse, and then while he waited I got out a pen and paper and wrote down my email address for him.

A little while later I was lying on the road having fallen off my bike going up a slight hill. Interesting night.

Jesse hasn’t contacted me yet.

A few years ago in New Zealand I found myself trying to untangle my motorcycle from a fence and pull it back up a grassy slope. It was a clear summer day and I was struggling on a verge, off to the side of a dirt road which runs up to the northern most tip of the Corromandel Peninsula, a stunning place if you ever get the chance to visit. While riding back from my solo, multi day motorcycle camping trip I had become a little too taken with my surroundings and I entirely forgot to follow the dirt road around a corner. I now know with an unfortunate degree of certainty that grassy verges, and fences for that matter, are both much less rideable than roads.

My motorcycle has always been heavy, but the problem was made far worse by the fact that it was stuck in gear, and both the brake lever and brake pedal had snapped off in the crash. “Both brakes, can you believe it, what a bummer,” I muttered as I toiled in vain to get it back on the road. The back wheel was still on mostly flat ground, but the front wheel was down the hill; so I was trying to pull it up backwards, but with the wheels locked in gear my motorcycle wasn’t moving an inch. I couldn’t seem to get it out of gear without letting it roll further down the slope, brakes would have helped. I was stuck between going nowhere, or rolling down a slippery slope, literally.

Eventually a couple driving north to camp showed up and kindly helped me get the bike back on the road. But having no working brakes was still an elephant sized problem. I was at least a couple of hours from the nearest town in an area without cell phone reception. The man rummaged around in the back of his car and appeared with a set of vice grips. Vice grips are like pliers which lock into position. If you’ve ever heard of ‘Kiwi ingenuity’ or ‘Number 8 wire’ mentality and have wondered what that means – well this is it; in the positive sense it’s fixing stuff with what you have available. We managed to lock the vice grips onto the stump of my front brake in a way which would give me satisfactory braking from slow speeds, maybe 30% of normal capacity, but enough to get me to a garage – slowly.

I thanked the man and his wife for saving me in my moment of need, and at my suggestion I took down his name and phone number so that I could later contact him and give him his vice grips back. I rode off with a warm fuzzy feeling at the kindness of these random strangers, and with thoughts of how nice it would be to send a box of chocolates or a bottle of wine as well as the vice grips back later.

Without his help and his intuitive brake fixing idea my failure to stay on the road would no doubt have ended up in a very expensive towing bill and a lot more of my time.

When I was safely home and no longer needed the vice grips I dialed his phone number. Continuous beeping. I tried a number of times for a number of months but never did manage to get hold of him; I believe I must have taken down the number wrong, and I couldn’t find their names listed in the phone book either.

I’ve often wondered if in that moment of careless communication if I inadvertently destroyed someone’s faith in humankind. But strangely, not hearing back from Jesse, may have helped me realise that you don’t need a response from someone to be content knowing you tried to do a good thing.

Bio: Sam is a Kiwi who spend the first five years of his early schooling not at school, but travelling the world with his parents and younger sister. Skip forward ten years and he decided to travel again; with a backpack and no particular time frame he set off to see the world. Away since May 2010, Sam has travelled in Thailand, all over Europe and North America where he is currently living in Montreal, Canada. Right now Sam is planning for a two month trip through Alaska with his girlfriend Renee in August before returning to New Zealand.