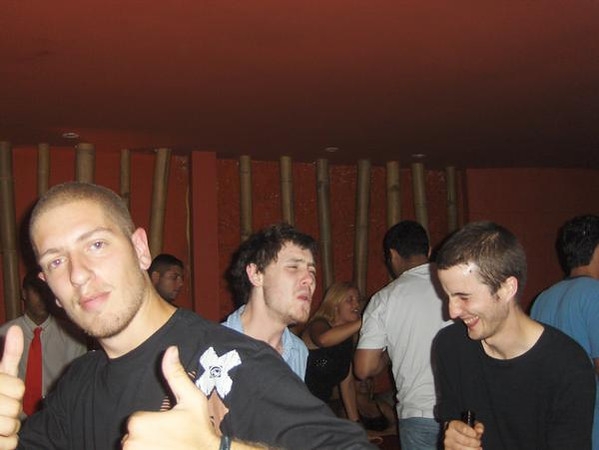 After a full day in Rochina I was pretty pooped to say the least. We’d been back at our hostel for an entire hour before Line, my Danish companion told me her friend was coming to pick us up to go clubbing. I was pretty apprehensive and told her I was going to stay in the hostel and “chill out.” Who was I kidding?

Luiz pulled up in his estate, gave a sly nod of the head and in jumped my mates. I was still sat on the veranda as the car pulled off and I instantly regretted it. Like a desperate dog, I chased after them and jumped in at a set of traffic lights. “Where are we going?” I asked. “We’re going downtown.” Luiz replied. “What does that mean? I asked. As an Englishman, the only experience of ‘downtown’ was a department store in the North of England. “It’s the city centre, idiot,” replied Nicolas, my blunt, French friend. I was so excited. Me, a young, small-town English kid, going downtown, Rio de Janeiro.

This is what I’d been dreaming about for months prior to my trip. I was finally going to hear some new music. I was fed up of the shit, mainstream crass England had been producing of late. I wanted powerful, filthy bass tones which would blow me away, and crazy, dirty, sexy Brazilian women grinding against anything they could grind against. Hopefully me.

The drive took about 30 minutes. Throughout the journey it became quite clear that Luiz, the driver and escort, was pretty smashed already. I quickly came to terms with his drunkenness and assumed I would rather die in a car-crash in Brazil  than of cancer in England.

We parked on a kerb and walked around for another hour, buying beer off street vendors. This amenity instantly became one of my favourite social ideals. It’s perfectly fine to stand outside a club drinking cans of beer until you decide to go in. It means you can get hammered for cheap while lining the pockets of the less wealthy members of society who are prepared to stand outside bars all evening.

We checked out a number of clubs before Luiz decided on one. He told us DJ Marlboro was playing and apparently he was one of Brazils hottest DJs. This was music to my ears.

We entered to club. It cost around R$30 and we got three drinks vouchers. Line, the only lady of our group, was allowed in for free.

As we approached the double doors to the club I was almost dancing with sheer excitement at the array of unrecognisable music I was about to hear. As I went to open the door I was sure I recognised the song. “Who is this?” I asked Alex, my English travel buddy. “I don’t know. Well, I do, but I can’t put my finger on it.” Another few second passed until the chorus kicked in. “Oh Jesus, no.” I said to Alex. “It’s Cindy Lauper.” It was a bloody remix of Girls just Wanna Have Fun. I was heartbroken, devastated and gutted. “Is this DJ Marlboro?” I asked Luiz. “I don’t know,” he replied. The man was a geriatric. He knew nothing. I was livid.

I stood at the bar, sulking and nailing my complimentary drinks. It’s easy for girls to have fun when they don’t have to pay in. More similar tunes were churned out – 80s and 90s and Noughties pop songs with poor basic MIDI remixes. I couldn’t believe what I was going through.

Then, I saw a bucket being passed from behind a private door to a private booth at the back of the room. I definitely thought is was a bucket of cocaine. I assumed it was passed down at head-height all the way from Columbia.

I shuffled over to that side of the room to get a glance. Never assume. On this occasion it was just ice. I ordered another beer and continued to sulk until I realised there was no point in doing so. I downed the lager and danced off to find the other four.

By then end, I guess I’d had a pretty good evening. Drank lots and discovered I knew all the words to every song from Franz Ferdinand to Europe and the Spice Girls. However, the home comforts, i didn’t really want.