Firstly, I need to put a disclaimer at the beginning of this article.  As a backpacker one encounters a mixed bag of travellers – most are backpacking for reasons one might expect: culture, new challenges, exploration, stimulation, etc; however, one does encounter those who are in it for other reasons.  If I was writing about the typical backpacker this would be a boring article.  Thus, I´ll venture off into the far fringes and write about one of the worst types one can encounter…FRAT BOY!!!

Frat boy is most certainly male and typically 18-22 years old – slightly above the level of amoeba in the animal kingdom.  Typically spoiled, frat boy is venturing off into uncharted waters for the first time in his life and is grossly unprepared.  In terms of life skills, frat boy may now be able to change his own underwear, on occasion.  When it comes to culture and worldly wherewithal,  frat boys may once in a while turn on the television when somebody else has haphazardly left it on the Discovery network.  However, if such a grievous evil has been unearthed, frat boy will quickly switch it to MTV to preserve his well sought out and deserved ignorance.

Mom & Dad have made a quiet decision back home.  They´ve noticed their ‘darling’ son is a little bit behind in terms of social development and maturity and they´re ever so slightly concerned.  They´ve decided to send him packing to some far off corner of the world with the hope he´ll come back a little bit more cultured and sophisticated.  Armed with the best of intentions, frat boy is dispatched abroad on his parents dime to see if he can ‘evolve’ ever so slightly.

Unfortunately, away from home for the first time, the burden of responsibility now lies upon the hands of mature travellers for taking care of the little prince.  Frat boy is beyond useless and clings on to other travellers like a crusty old piece of toilet paper.  He´s completely incapable of making intelligent or sound decisions on his own: booking hostels, tours or anything of that matter is beyond his comprehension – he doesn´t even have a basic itinerary for crying out loud! Moreover, he´s extremely annoying, culturally insensitive, immature and totally out of vogue from that of a typical backpacker.

Typically annoying is that frat boy has priorities quite different from others.  It´s not about exploring temples, savouring local delicacies or learning the local lingo.  Frat boy is spending his parents coin like a jaded old hag at a slot machine.  He´s never had money of his own that´s he earned and saved; therefore, he´s spending it without rhyme or reason.  He´s always the prime suspect at 4am when one is abruptly awoken by the sound of another hurling all over the floor.

When it comes to night-life, frat boy wants to be the centre of attention.  Away from his parents discerning eye for the first time in his life, he feels as though he´s been given a free get out of jail card.  He consumes beer, liquor and drugs in anything but moderation.  You´ll find him passed out in just about every corner.  With unrefined social skills & a lack of suave & sophistication, frat boy is found striking out left, right and centre with locals, expats and tourists in the romance department.

The major relief about frat boy is that he´s not likely to be in your hair for too long.  His funds will quickly run dry and the inevitable telephone call home is almost a guaranteed certainty.  If he’s bailed out he´ll be sticking around a little while longer; however, chances are he´ll exhaust those funds soon and be on the next flight home.  He´ll have gained nothing from the experience abroad and will go home with a feeling of cultural superiority.  Overall, frat boy gives a bad name to backpackers and those who feel foreigners are nothing more than a collection of obnoxious parasites invading a host country.  The truth is that frat boy is an exotic breed rarely encountered, but for those who have been on the dusty road long enough, he´s likely been on your radar at some point in time or another 😛 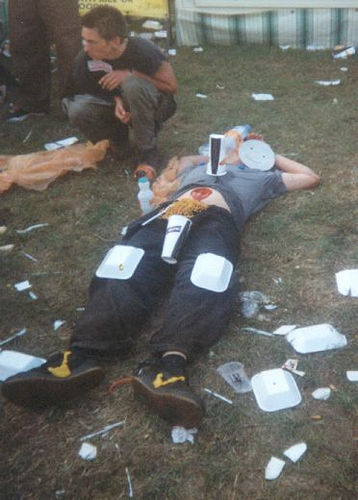