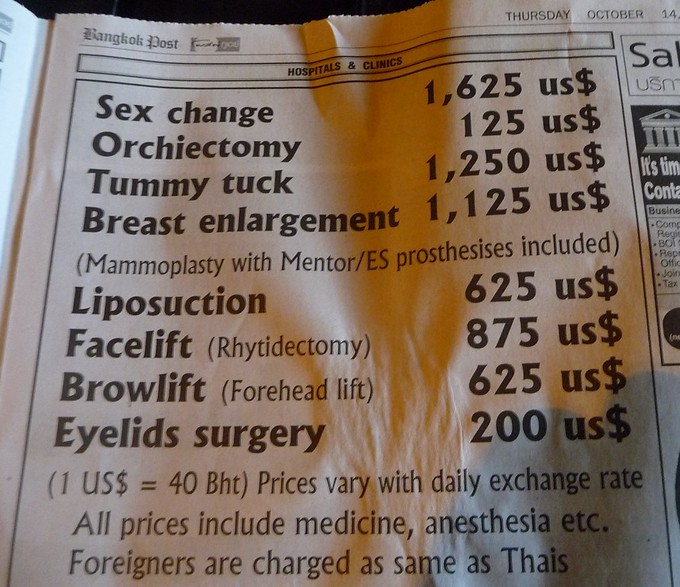 On a hot and humid afternoon in the cultural hub of Chiang Mai, Thailand, I sought refuge in a shady local cafe specializing in fruit shakes.  As beads of sweat poured down my face, I focussed my attention on a Thai-English newspaper laying adjacent to my table.  As I furiously flipped through the pages while killing time for Mango shake to be made, I suddenly noticed an advertisement for plastic surgery.  It was no surprise to see such an advertisement, as I had known for quite some time Thailand and South Korea are premier destinations for people who undergo plastic surgery treatment abroad.

However, I couldn’t help but chuckle over the fact that ‘sex change’ was listed prominently at the top position.  Other options included less drastic forms of bodily manipulation, such as eyelid surgery, browlift, facelift, liposuction, tummy tuck and the ‘ever popular’ breast enlargement surgery.  I also was fascinated by scale of prices for each treatment option. Transforming from Dick to Jane or vice-versa was less than double the cost of a facelift and less than two and a half times cheaper than liposuction as one could literally have his/her Wee Willy Wonka wacked off completely or attached for quite a reasonable price according to this post.

My mango shake finally arrived at my table and I sipped slowly through the straw savouring it as much as I possibly could.  As time passed, I reviewed photos I had taken for the day on the my dSLR camera deleting most of my shots; however, my mind kept racing back to the quirky advertisement.

Having lived overseas for several years in South Korea, I had become accustomed to hearing stories about others having major or minor surgery done on his/her face or body.

When I taught in Bundang, one of the wealthiest area just outside of Seoul, I heard my privileged Korean adult students talk about the plastic surgery they had done on their face with the same ease one would mention the current weather.  In fact, it is common to find Korean celebrities before and after photos on the internet visibly depicting all of the facial reconstruction they’ve had done over the years.  At times it was staggering as the before and after photo did not at all resemble the same person.

As my mango shake slowly dwindled to nothing but orange stains on the side of the cup, I packed up my camera gear and paid for my most refreshing shake.  Feeling energized, I sauntered back out in the heat and humidity still in awe over the fact one could change sexes for roughly the same cost of a return ticket to Bangkok from anywhere in America.