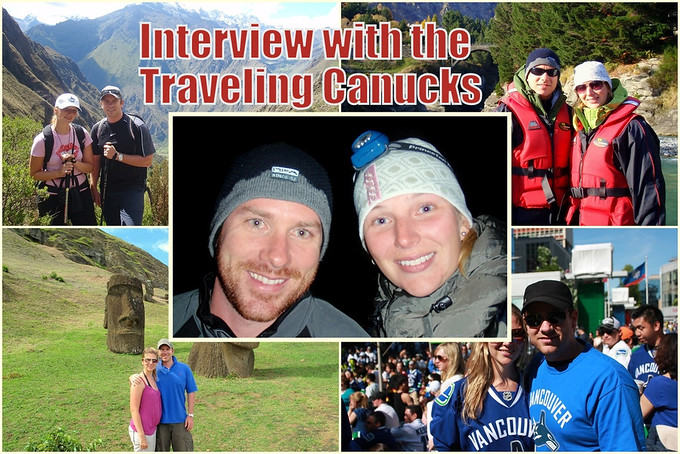 This is an interview with top travel bloggers Cam & Nicole of the Traveling Canucks.

The travel blogging community is filled with talented, supportive and positive members, but few embody this more than Cam & Nicole Wears (aka the Traveling Canucks).  I’m delighted they’ve taken the time to answer questions related to travel in beautiful British Columbia, Canada.  For those who don’t know, I grew up in British Columbia on Vancouver Island and was privileged enough to have lived within the beautiful confines of this province until I graduated high school.  Nicole and Cam are currently based in Vancouver and have been taking trips all over the province, in recent months, highlighting many of the best destinations, adventures and activities available.  They’re also very accomplished international travellers which makes me thoroughly addicted to their blog.  We naturally enjoy a bit of back and forth goading considering they’re huge Vancouver Canucks fans and I’ m die-hard Chicago Blackhawks admirer.  The two teams have faced off against one another for three consecutive years in the play-offs, creating what many consider the most heated rivalry in the NHL today.  Although we enjoy some good old-fashioned ribbing over this, there is no doubt, when it comes to travel blogs, I’m a huge fan of what they do.

Q1) British Columbia is often regarded as the most beautiful province in Canada by both Canadians and foreigners travelling across Canada. What do you think are some of the reasons for this high level of praise?

We think British Columbia gets its praise because of its stunning mountain landscapes and misty Pacific coastline. It’s such a diverse land, with lush temperate rain forests, dry wine growing regions, steamy hot springs and frozen glaciers – it really does have it all!

Q2) British Columbia is known for its stunning and rugged beauty when it comes to nature and the environment. What are some areas you would recommend for those looking to get outside of the cities (such as Victoria and Vancouver) to experience some laid back times?

Wow – where do we begin! It totally depends what you’re looking for. Some popular British Columbia adventures include snowboarding/skiing in Whistler, surfing in Tofino, kayaking Haida Gwaii (formerly the Queen Charlotte Islands), wine tasting in the Okanagan Valley, soaking in the hot springs at Harrison Hot Springs, camping at Chilliwack Lake Provincial Park, biking along the Sunshine Coast and whale watching in the Southern Gulf Islands.

Q3) On your blog you’ve been posting about some exciting adventures you’ve had on Vancouver Island. What are some recommended activities for those looking to visit there?

We love Vancouver Island and try to visit a couple times each year. We actually met each other while attending university in Victoria many moons ago.

Similar to the above answer, it really depends on what you are looking for. As cliché as it sounds, there really is something for everyone. There are vineyards for the wine enthusiast, world class surfing in Tofino, scenic float plane tours over mountainous landscapes, world class skiing on Mount Washington, orca whale watching tours in the Southern Gulf Islands, challenging treks like the West Coast Trail and Juan de Fuca Trail, kayaking secluded coves, salmon fishing on the Queen Charlotte Strait, cold water scuba diving near Port Hardy, great nightlife and restaurants in Victoria, and the list goes on…

Q4) B.C. Is known for being a playground for the adventure sports junky. What are some activities and destinations you can recommend for those looking to fulfil this craving?

Q5) If somebody mentioned to you they had a month to travel across British Columbia – and wanted some ideas for an itinerary – what are some must see places in your opinion?

We’re often asked by visiting friends to recommend travel itineraries around British Columbia. A month is a great amount of time and should be enough to see most of southern BC (the north is a whole other ball game).

After spending a few days in Vancouver, catch the ferry to Victoria and spend a few nights in the provincial capital. (here are some things to do in Victoria – http://travelingcanucks.com/2011/08/things-to-do-in-victoria-british-columbia/ ) Then, travel northwest to Tofino and Pacific Rim National Park where you can take up surfing or paddle boarding. After a few nights on the coast, travel back to the mainland via Nanaimo. The ferry will arrive in Horseshoe Bay, where you can easily reach Whistler within 1.5 hours. Spend a few days in Whistler, enjoying its endless outdoor activities and trendy alpine village atmosphere. Squamish, located between Vancouver and Whistler) is another outdoor adventure town worthy of a visit – it boasts world class rock-climbing, hiking trails and windsurfing.

Keep heading north towards the Thompson-Okanagan, the route via Lillooet is quite scenic and has beautiful lakes, parks and campgrounds. If you’re traveling during the summer (an ideal time to visit BC), spend a few days wine tasting in the Okanagan Valley and rent a boat on Okanagan Lake.

After some lazy lake time, continue towards the stunning Canadian Rockies. You can easily spend two weeks in the Rockies, so pick a couple provincial or national parks and start exploring (we really like Yoho National Park). I would also recommend visiting Banff National Park in Alberta, just a few hours from the eastern BC border (It’s arguably the most impressive park in Canada).

Then, head south towards Nelson and Cranbrook for more outdoor adventures that include white water rafting, mountain biking and spectacular hiking trails. You can make it back to Vancouver within a day or two from Nelson, depending on the weather and how fast you like to drive. 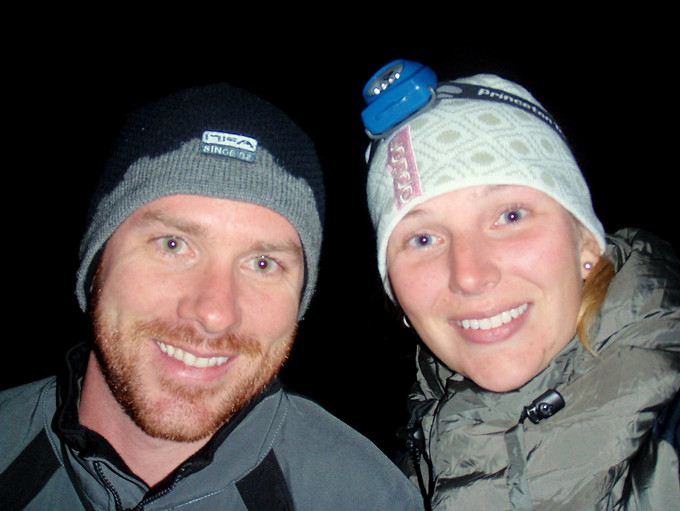 Q6) Travelling in Canada is not nearly as budget friendly as many other destinations in far off corners of the world. What are some tips or advice you could recommend to somebody backpacking in B.C. on a budget?

Bring your camping gear and travel in the summer months. There are loads of campgrounds that are fairly cheap, so this should reduce your accommodation costs (which tend to eat up a travellers budget very quickly). You’ll likely want to be outdoors anyways!

If you’d rather sleep with a roof over your head, there are great inexpensive timeshare rentals across Canada that have full kitchens and lots of room for those traveling in large groups. A good tip is to look for timeshare units during the off season to save even more money.

Find some travel companions and rent a car instead of taking the bus. The transit infrastructure is adequate, but it’s expensive and somewhat limited on schedules and routes. You’ll be able to see so much more with your own ride.

Q7) Vancouver has experienced some real highs and lows over the last several years. The winter Olympics held in 2010 were largely regarded as a success but what happened during the Stanley Cup riots in 2011 was an awful eyesore. For those looking to visit Vancouver do you feel it has taken a bit of hit in terms of its reputation or was this just an isolated incident?

The Stanley Cup riots were totally an isolated incident. I don’t feel that Vancouver’s reputation has been jeopardized because of these drunken idiots (most of whom weren’t even from Vancouver; they were from the outer suburbs). Every city experiences embarrassing moments. It doesn’t change the fact that Vancouver is still the best city on the planet! 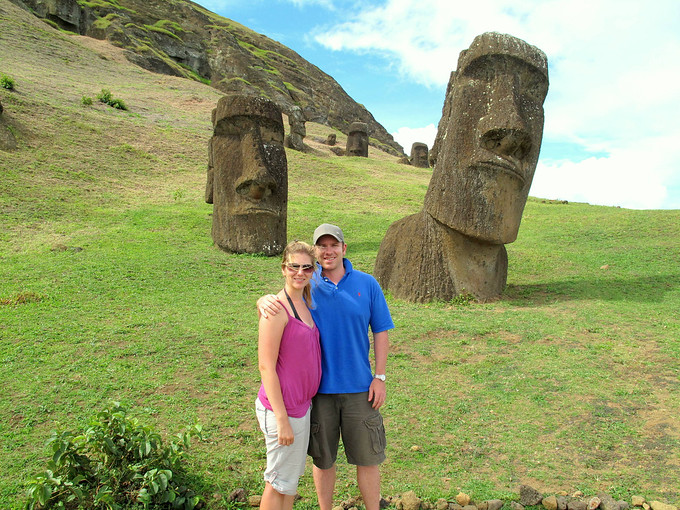 Q8) How have travels abroad impacted the way you consider travel in your own backyard? Do you find it comforting to experience a familiar destination or do you often crave the excitement that an exotic locale can offer?

That’s a great question. Our opinion seems to change every year. Heck, our opinions change several times a year.

We need a balance between both domestic and foreign travel. We love the excitement that comes from experiencing new cultures and exotic locations, but our international travels also remind us how fortunate we are to live in such a wonderful place. The grass is always greener on the side.

Q9) Your recommended beer series from around the world is legendary amongst the travel blogging community. What are some good B.C. beers that shouldn’t be missed out by anyone?

There are dozens of craft beer manufacturers and micro-breweries scattered throughout the province, so I would recommend finding one and sampling its selections on tap.

In Vancouver, a few popular brewpubs are the Yaletown Brewpub, Granville Island Brewery and Steamworks Brewpub. In Victoria, check out Spinnakers Gastro Brewpub, Phillips Microbrewery, Driftwood Brewery and Vancouver Island Brewery. In Whistler, head to the Whistler Brewpub in the village.

Most cold beer and wine stores in BC have a decent selection of craft beers, so grab a couple large bottles and give them a try. Some other BC beers that we enjoy are the Red Racer IPA, Tree Brewing Amber Ale, Granville Island Winter Ale, Philips IPA, Whistler Black Tusk Ale, Nelson Paddywhack IPA, Dead Frog Pale Ale and Red Truck Lager.

Q10) Finally, it’s well known your site domain name is based largely by your passion for the Vancouver Canucks. After a disappointing loss to the Bruins in the Stanley Cup Final last season, what do you think are the chances of them hoisting the Cup this season?

Bhah! We hate the Boston Bruins almost as much as we hate your Chicago Blackhawks! Our team looks great this year. I think we have a really good shot at making the finals again, hopefully with a different outcome this time!