35 Things to do in Chicago Travel Guide

As a die hard Chicago Blackhawks and Cubs fan, sports is what first brought me to the Windy City. However, over the years – on subsequent visits – I’ve come to appreciate the phenomenal architecture, food scene, entertainment and cultural options the city has to offer. I was thrilled to be taking Audrey here for the first time.  Given that Chicago is my favorite city in North America, I felt an extra incentive to put forth my best effort with this travel video, photo essay and travel guide. The following is the city’s top attractions and underrated gems worth exploring:

An ideal way to enjoy the architecture  in the downtown epicenter of Chicago is to take a river walk.

Chicago River is lined with impressive buildings on either side of the Chicago River providing you with ample opportunity to gawk at them.

Some of the architecture highlights included Marina City, Trump Tower, and The Wrigley & Tribune Building.  Although we did 35 things in the city, this was near the top of the list.

Alternatively, if you’re not up for a walk, architecture river tours are a thrilling way to take in the sights along the river.  You’ll notice boats of all shapes and sizes plying the Chicago River.

3) Kayaking along the Chicago River:

If you find yourself here during the summer months kayaking is a popular activity – although, my goodness, I was sweating just looking at them on a day that was in the mid 30’s.

Easily one of the most iconic structures in Chicago in recent years is the Cloud Gate also known as ‘The Bean.’  This unique marvel was the brainchild of Anish Kapoor.  Unless you visit before the crack of dawn, expect to be brushing elbows with other camera happy tourists.

The Crown Fountain is an interactive sculpture located in Millennium Park. It’s a nice escape from the stifling heat and you’ll encounter a throng of kids splashing around in the water.

Summer is an ideal time to be in Chicago because of all the free events in the pavilion. We managed to catch a free movie and some concerts during our stay.  Remember this golden rule:  don’t forget your umbrella!

Art lovers will enjoy the Art Institute of Chicago, which holds the work of Internationally renowned artists like Vincent Van Gogh and Paul Gaugin.  I’m not normally a huge fan of art galleries but this one is worth going to no matter whether you’re an art connoisseur or not.

Taking in a Chicago Cubs baseball game at Wrigley field is a must for anyone who visits the city.  Wrigley Field is a historic park featuring an ivy covered brick wall and hand operated outfield scoreboard.  You won’t find a ballpark quite like it anywhere else in the United States.  The Cubs, on the other hand, are affectionately called the ‘lovable losers’ having last won a World Series when the Ottoman Empire was still in existence.  They hold the rare distinction of being the most futile team in professional sports; however, that doesn’t stop the die hard fans (note: naive – myself included) from rooting for them.

You can’t come to Chicago and not devour deep-dish pizza! During our week here we gormandized at many pizzerias in town including Lou Malnati’s, Giordano’s, Gino’s East Side, and Pizzeria Uno.  Picking a favorite would be tantamount to choosing a favorite child 😉

Formerly known as the Sears Tower, Willis Tower is now the 2nd tallest building in the United States. It happened to be a foggy day when we visited ideally setting the scene for atmospheric photos.

11) Stroll around the University of Chicago campus:

The University of Chicago is one of the most gorgeous campuses I’ve ever had the privilege of setting foot on.  Gothic style buildings draped in Ivy are what you’ll notice as you meander you way around campus.  For a perfect example of this, step inside the beautiful Rockefeller Chapel.

12) Check out the Oriental Institute of History:

The campus is also home to the Oriental Institute where the public can view an extensive collection of artifacts from the Ancient Near East.

13) Marvel and escape the bustle at Osaka Garden:

Although Chicago is not nearly as chaotic as New York City, it can nevertheless be overwhelming at times.  I suggest visiting Osaka Garden to escape it all.  Located in Jackson Park, it is a tranquil place with lots of little paths that you can walk down.

14) Enjoy an afternoon or evening at Wicker Park:

This Chicago neighborhood was put on the map by the movie Wicker Park starring Josh Hartnett and Diane Kruger. If you visit the neighborhood today you’ll find it has a hipster feel, with lots of street art down every alley.

15) Relax and escape at Humboldt Park:

Humboldt Park is a little far removed from the downtown area so it’s not as popular with visitors, however, it’s an ideal location to soak in nature. You can wander around the pond, catch a pick up game of baseball, or grab a quick bite from one of the many food trucks parked in the area.

16) Check out the Dinosaur exhibits at the Chicago Field Museum:

For a chance to lock eyes with dinosaurs, head over to the Field Museum. This museum is home to the largest and most complete T-Rex to have ever been found and her name is Sue.  Ain’t she pretty?

17) Visit the Shedd Aquarium – the largest indoor one in the world:

Right next door is the Shedd Aquarium which is a popular attraction for families.  We enjoyed checking out the plethora of museums in this surrounding area to kill time on a rainy day. 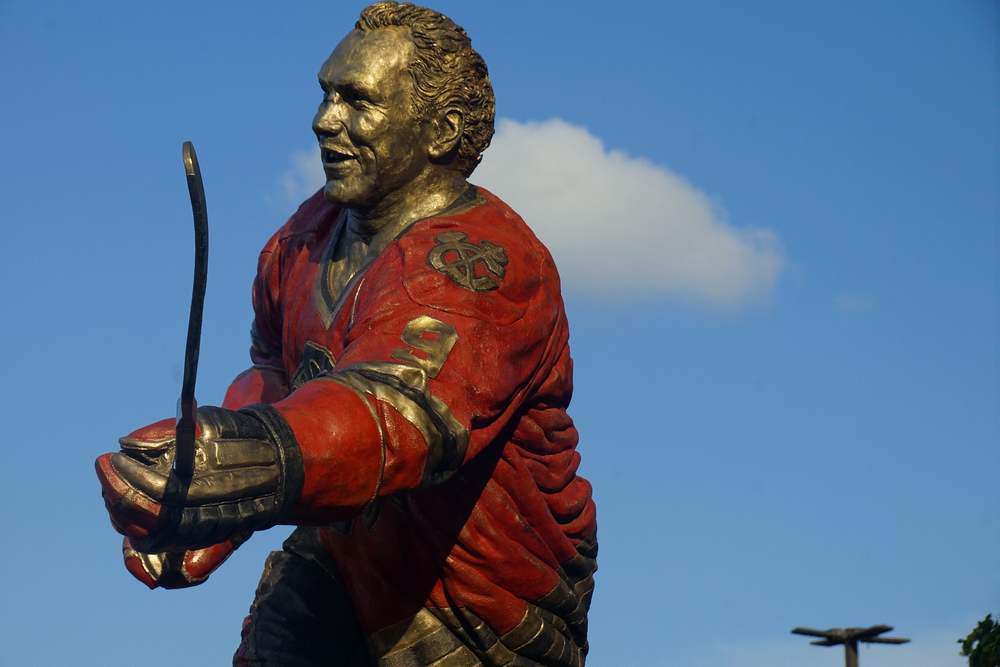 18) Watch a Chicago Blackhawks game at the United Center:

My beloved Chicago Blackhawks!  As a Canadian, hockey is my religion of choice.  If the Cubs have been the ultimate failure of a franchise, the Blackhawks have more than made up for it with Stanley Cup victories in 2010 and 2013.  One day I’d like to see a Jonathan Towers and Patrick Kane statue next to the Bobby Hull (pictured above) one.

19) Check out the ‘Borders’ exhibit at Solti Gardens of Grant Park:

While in the city, we also got to visit an art installation called “Borders”. It’s located in the Solti Gardens at Grant Park and I dare you not to have fun trying to blend in with the sculptures 😉

20) Admire Buckingham Fountain during the day or at night:

Most spectacular at night, Buckingham Fountain was used in the 90’s sitcom Married with Children during the opening credits.

21) View the Chicago skyline from the Hancock Center:

Having already gone up the Willis Tower by day, we decided to visit the John Hancock Center by night. The city really dazzles from the 94th floor and -boy oh boy – is Chicago ever pretty when the lights shine at night.

22) Spend an afternoon having fun at Navy Pier:

The Navy Pier is a fun place to visit on a weekend as a family outing or for date night. The pier is lined with fun rides including a giant Ferris Wheel, a wave swing, and a carousel.

There are a number of free attractions in Chicago. One of them being the Lincoln Park Zoo. While visiting we spotted plenty of animals including polar bears, lions, tigers, and rhinos. Afterwards we headed over to conservatory which is worth a peak.

24) Work out or get a tan at North Avenue Beach:

Located in the north end of the city, North Avenue Beach is a popular hangout spot with beach-dwellers. You’ll find people jogging, playing sports, and working on their tans.

25) Laugh your head off watching improv at The Second City:

For improvise comedy there’s no better place than The Second City. This theater troupe has seen some pretty big names wander through its halls over the decades.

Audrey’s new obsession.  These mind maze games are a real trip.  We come close to solving this one but ultimately ran out of time.  The result?  We were eaten by Zombies 😉

27) Go shopping or people watching along the Magnificent Mile:

The Magnificent Mile is a shopper’s paradise. This area is home to high end boutiques and department stores.  If you don’t have a fat wallet come to people watch instead.

The Chicago L, or the elevated line, is tailor made for zipping around town. A week pass is $28 for unlimited travel.  This is the best value purchase you’ll make during your week long stay in the Windy City.

Da Bears!  For NFL football action check out a Chicago Bears game at Soldier Field.  They play in the fall/winter months.

Notice above that shiny two dollar bill with a rather distinct (yet familiar) looking face 😉  As another one of Chicago’s many free attractions, I’d recommend visiting the under-rated Money Museum at the Federal Reserve Bank of Chicago.  We were the only ones there when we went!

31) Ride a bicycle in downtown Chicago:

The Divvy is Chicago’s bike sharing system. It is ideal for quick trips and you can drop the bikes off at any station around town.  This is what you’ll want to be doing after stuffing your face with deep dish pizza 😉

32) Spend time at the Museum of Science and Technology:

Chicago’s Museum of Science and Technology is the largest science museum in the Western Hemisphere. They cover everything from submarines to weather patterns.

This home may not look that impressive from the exterior, but it’s an important example of the Prairie School architectural style which is uniquely American.

34) Rest your legs by taking a Chicago city tour by Segway:

If you tire of walking, segway tours are a zestful way to zip around the city.

35) Check out a performance at Chicago Theatre:

It’s hard to miss the flashing lights of the historic Chicago Theatre! Their events calendar is packed with some big names from the music industry.

And that’s a little preview at our week long visit to Chicago! We tried to cover some of the well-known attractions as well as some sights that lie a little further from the downtown core. We hope this video, photo essay and travel guide will help you plan your next visit to Chicago.

If you’ve already been to the Windy City be sure to leave us a comment and let us know about some of your favorite spots.