Isn’t it a shame that under normal circumstances our Halloween costumes accumulate nothing but dust most of the year?  Well, for those living in and around South Queensferry – Edinburgh, it need not be the case.  Every year after Hogmanay (New Year’s in Scotland) a hoard of mad brave souls converge for a frigid splash in the Firth of Forth with the magnificent Rail Bridge looming in the distance.

Costumes, as well as the participants, are colorful/zany and come in all shapes and sizes.  From Little Red Riding Hood to the man wrapped in bubble tape (and even a mankini thrown in for good measure) there were many creative and equally crazy costumes during the event in 2014.

Out of the over 1000 Dookers that participate some appear to be right in their element; in particular, one very fit mature man was swimming around like it was the hottest day in July.  Conversely, other participants came racing out of the icy cold river with chattering teeth and furiously dried off with multiple towels.

Aside from being a dream for photographers, all proceeds from the Loony Dook go towards charity.

Whether one is a Dooker or merely a spectator, it’s one of the quirkiest events you can ever possibly attend with plenty of laughs and smiling faces to be seen.

As a travel tip, for the best vantage point as a spectator it is recommended to arrive early before the masses converge.

The following is a photo essay capturing Loony Dook in all of its glory:

I thought this chap had the best costume by far decked out in the Wolf wearing Grandma’s clothes. Watch out Little Red Riding Hood! 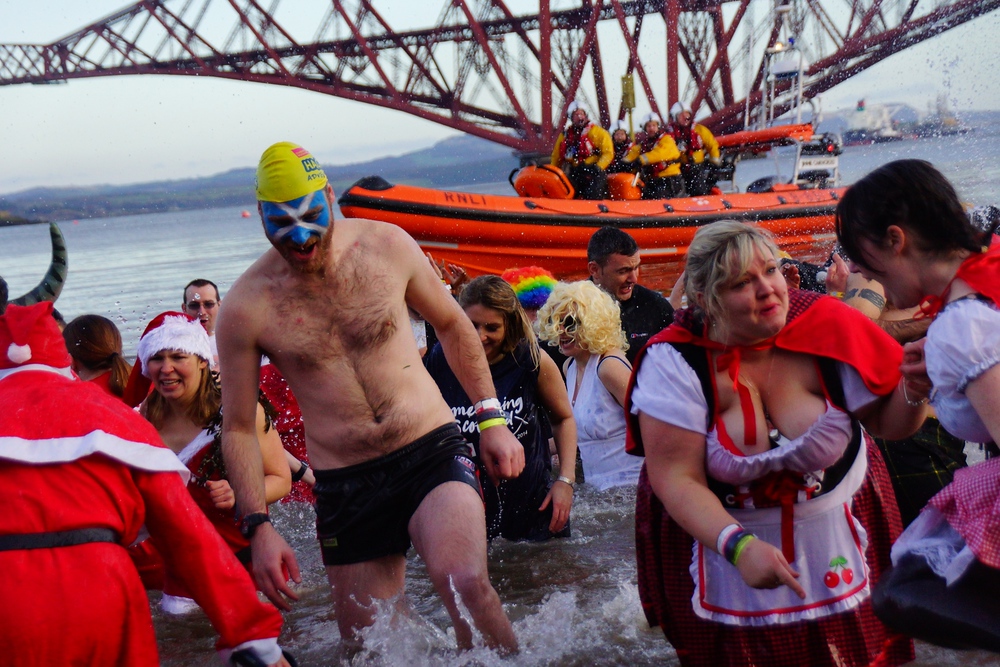 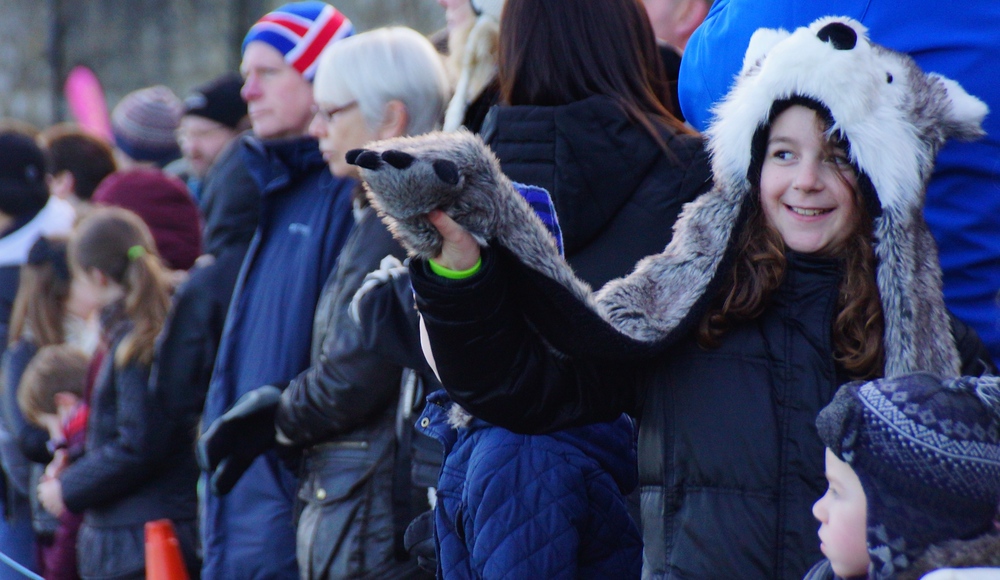 A couple of cute kids waiting along the spectator row for the Loony Dook to begin. 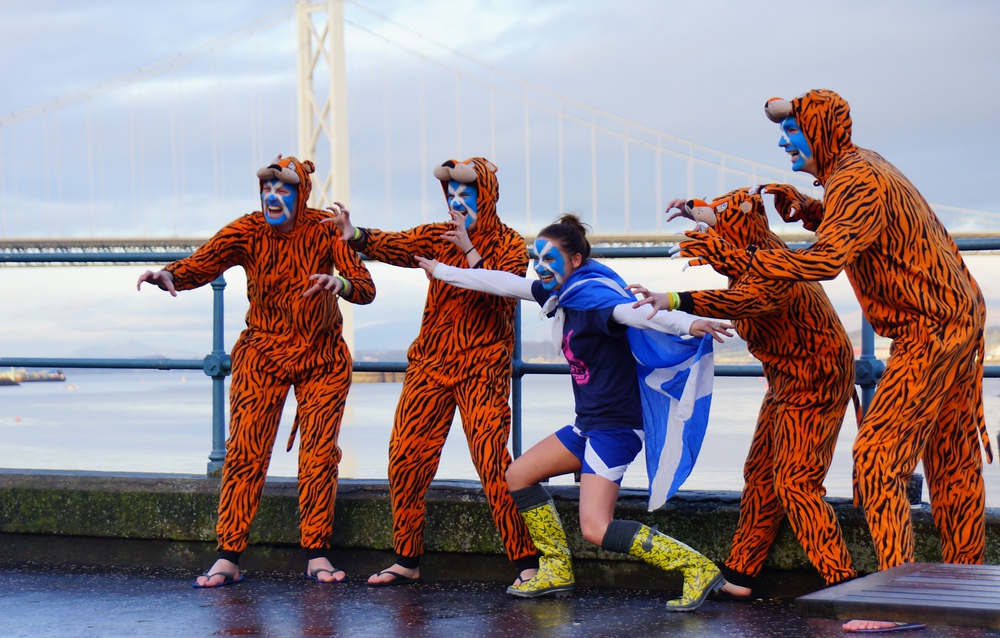 Loony Dook participants strike a pose prior to the event commencing.

A girl wearing a warm pink fleece and toque sits on top of her Dad’s shoulders while watching the Loony Dook in Edinburgh, Scotland. 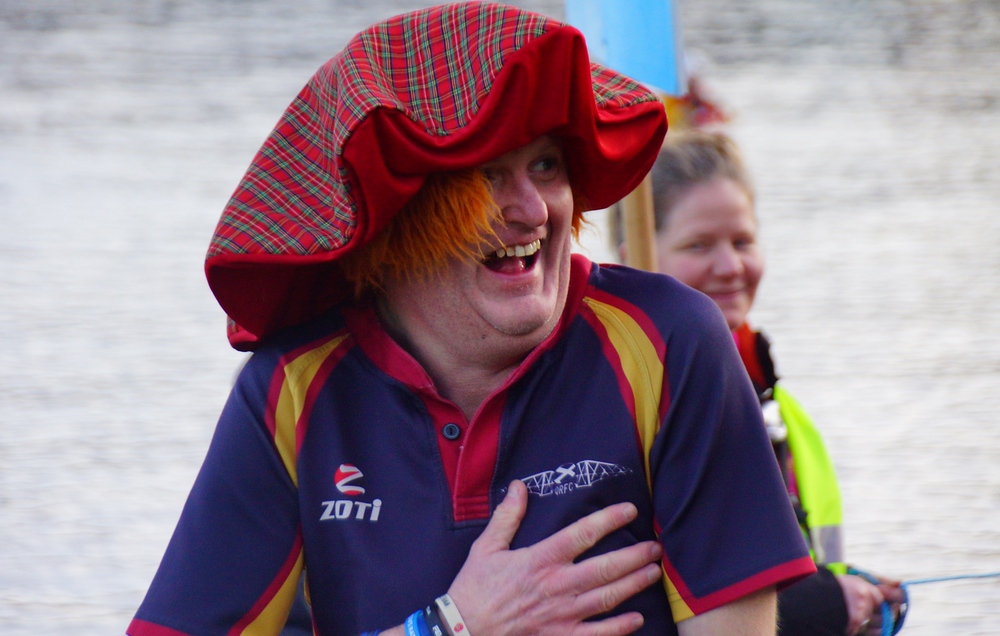 This man beams a radiant smiles during the Loony Dook festivities at the Firth of Forth. 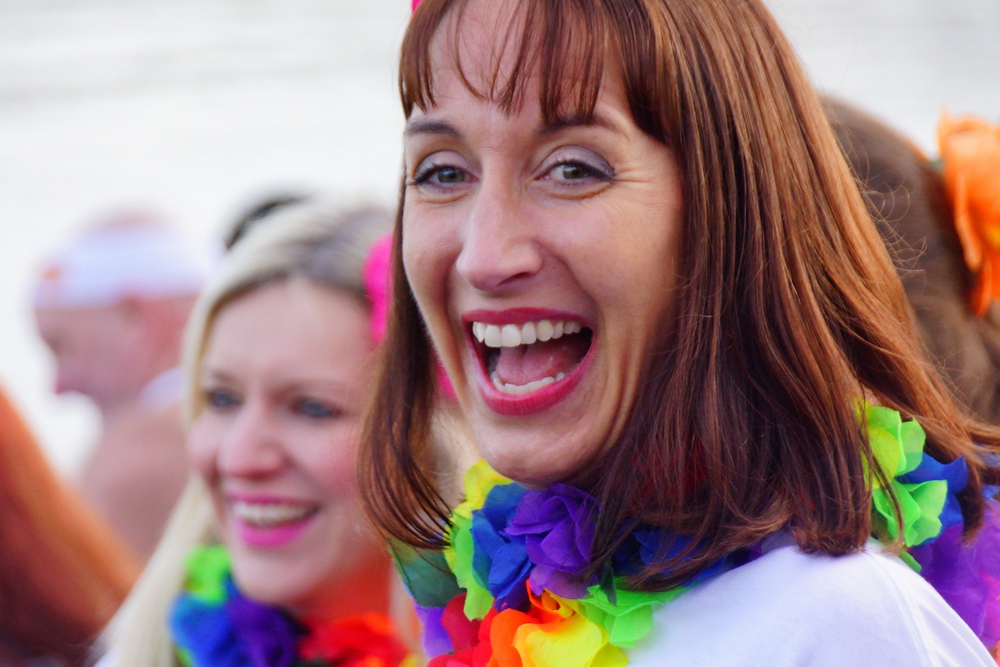 A delighted smile of a lady enjoying the Loony Dook in Scotland. 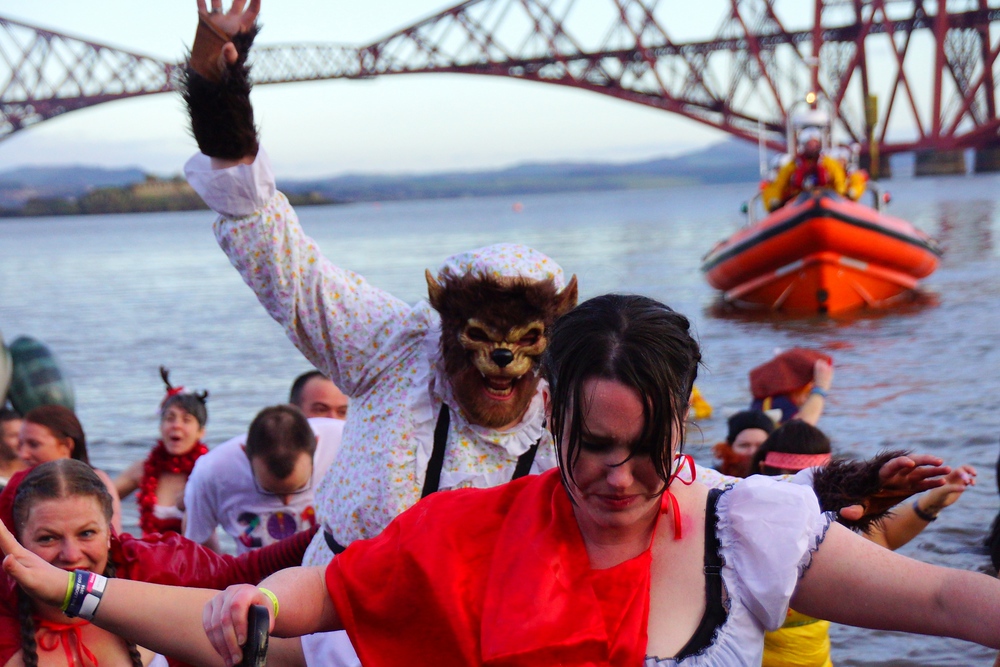 Little Red Riding Hood does her best to escape from the Big Bad Wolf during the madness of the Loony Dook. 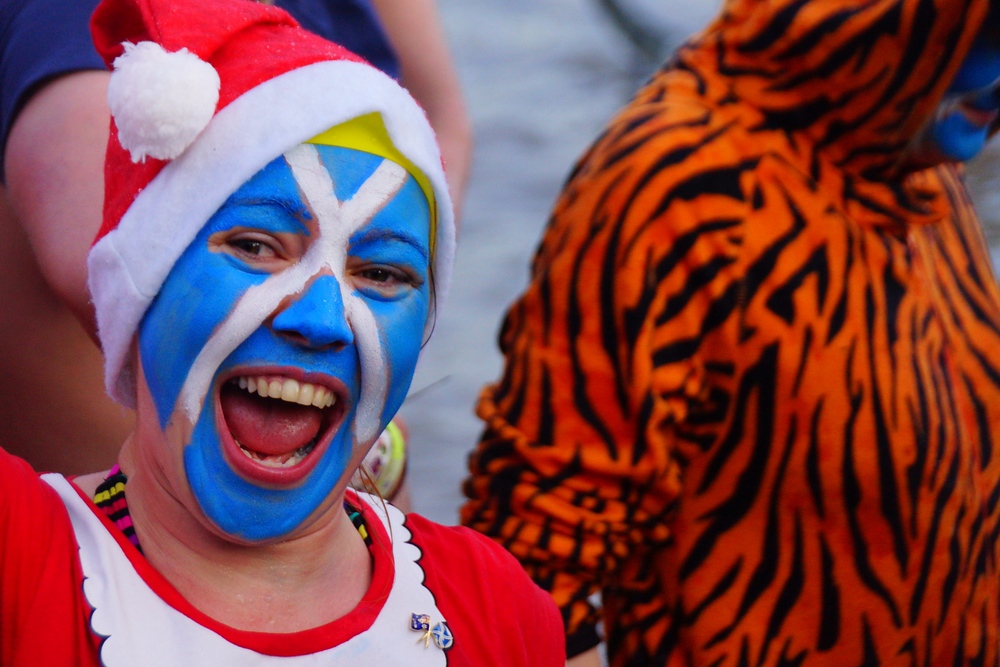 Quite possibly the biggest smile at the Loony Dook event. 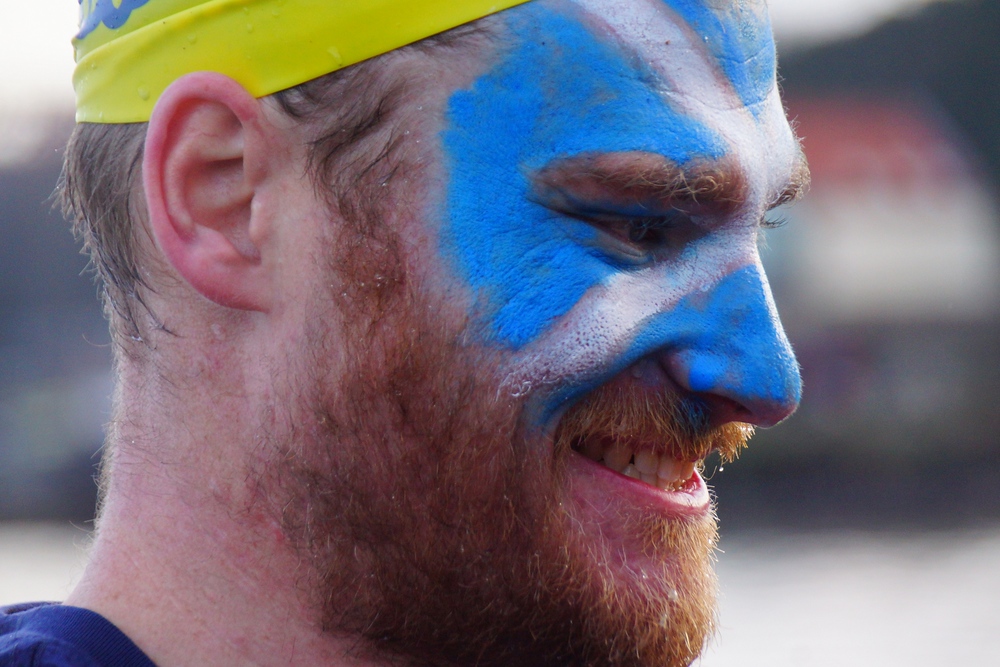 A man with the Scottish flag painted on his face stops to smile during the Loony Dook. 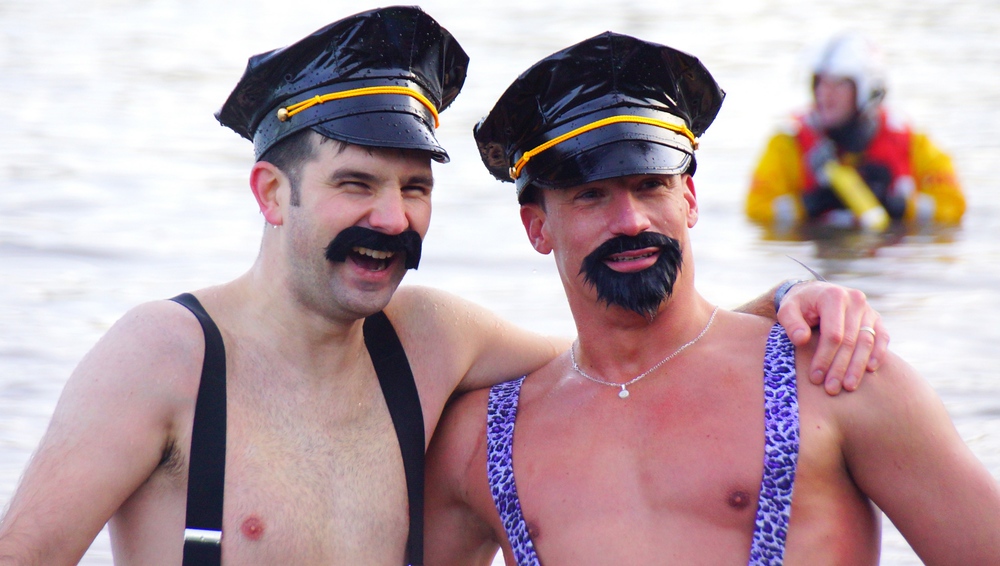 The Village people showed up for the Loony Dook! 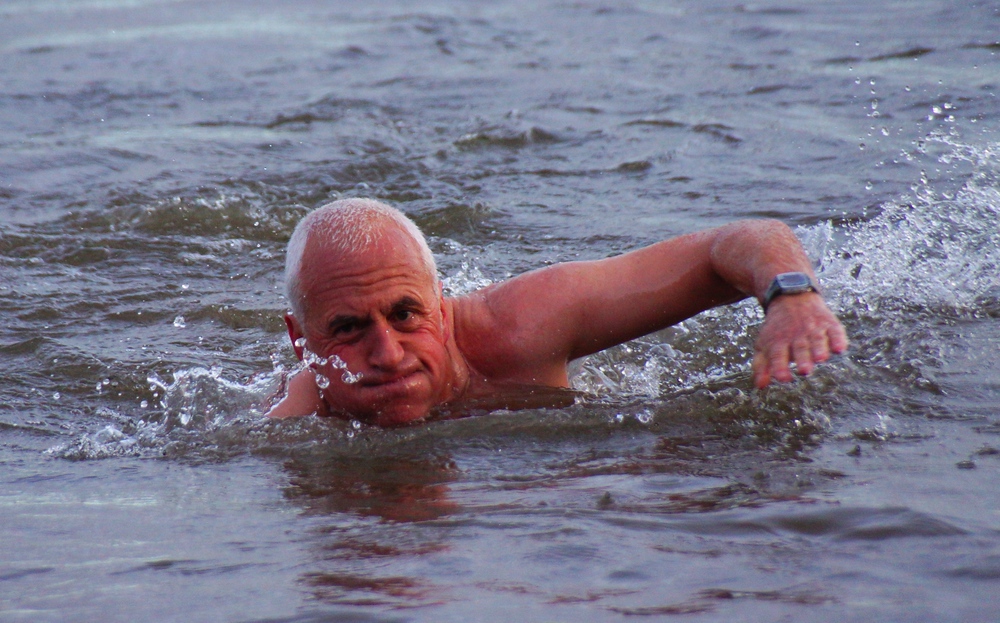 A man very confidently and bravely swims in the Firth of Forth during Loony Dook.

Would you like to attend this year? Only a few weeks away, here is what you need to know:

What are your thoughts on Loony Dook? Would you like to participate? Watch as a spectator? Do you know of another quirky event that is comparable? Let me know in the comments section below: