Today’s feature travel video is of us eating street food in Macau, China with a specific emphasis on Macanese cuisine which has distinct Chinese and Portuguese influences. 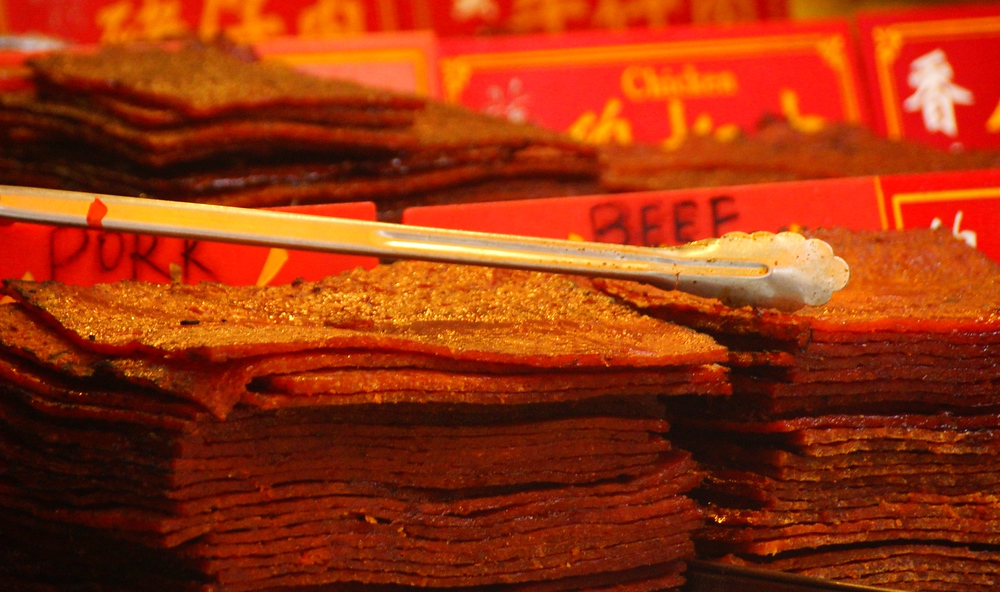 After an impossibly long day packing up, moving out and flying to Macau from Chiang Mai, we were ready to hit the streets – after a long sleep – to check out all of the culinary delights Macau has to offer.

It’s a fusion style of cuisine that combines ingredients found in Europe, other parts of Asia and locally.

As we wandered through the historic area of the Macau we quickly realized we’d be able to mark off all of the items we had our checklist of street foods to try eating.

There were so many people competing for space it looked as though an ant hill suddenly split open with all the ants (people) scurrying about frantically.

First on our list was the famed Egg Tarts (Portuguese: pastel de nata) which we quickly spotted as we randomly wandered around.

Pastéis de nata were first introduced in China under the Portuguese government that controlled Macau.

In Chinese they are known locally as 蛋撻 and/or 蛋挞 (pronounced as dàntǎ) literally translating as egg tart.

On the outside they were crispy with a soft fluffy creamy center similar to a souffle. Distinctly sweet, they immediately were a hit with both of us.

As we continued along the pedestrian strip we encountered a shop giving out free samples of dried and sweetened strips of meat. Audrey took a bite and proclaimed it tasted similar to bacon.

Our quest to satisfy our ever demanding sweet tooth brought us over to a shop selling almond biscuits (杏仁饼 or 杏仁餅). Also known as almond cakes and almond cookies, these Chinese pastries are quite similar to shortbread Christmas cookies. They’d make a great little snack for afternoon tea.

Feeling a little overwhelmed by the gridlock of people in tandem with stifling heat and humidity, we decided to head down a less crowded side street where we just happened to stumble across a shop selling Macanese pork chop buns.

These buns, which are crispy on the outside and soft inside, are some of the most popular snacks in all of Macau. Luckily, the little eatery we selected was full of locals, so we knew it would be good.

Also known as a piggy bun, a fried slab of seasoned pork chop (豬扒包) is placed inside of a bun that appeared to be coated with butter.

Although this dish wouldn’t score highly in terms of ‘being healthy’ it certainly was delicious as the pork was very flavorful and melted in your mouth with each bite of the bun.

The one dish we didn’t get to try was Galinha à Africana (African chicken); however, I have tried it once before and I even made my own version of African chicken which I shared as a recipe on my site.

Overall, we enjoyed tickling our taste-buds with Macanese cuisine and we highly recommend you try as much as you can when visiting Macau.