As I walked up a steep hill I took the time to feel the warm sand beneath my toes as I took each step. When I reached the summit, I pivoted and marvelled at the scenery before my very eyes. Panoramic views of jagged rock formations on a bed of sand left a lasting impression. Each rock formation was so distinct it appeared it had been individually hand carved by an artist. I snapped a few photos and then I put my camera down and sat down in awe – some places are just worth the extra attention.

Visiting Wadi Rum was one of the true highlights of our journey to Jordan.  Known also as The Valley of the Moon, its name derived from the Aramaic root of ‘elevated’ and has been inhabited by many human civilizations over the years – most notably the Nabateans.  Home to the Zalabria Bedouin, the region is one of the most popular eco-adventure tourism spots in all of Jordan.  From treks to camel safaris to cultural experiences there is something for everyone to enjoy.

Our most memorable experiences included:

Sleeping in a Bedouin tent at night

Sharing a meal which was cooked under sand

Dancing, singing and lounging by the campfire 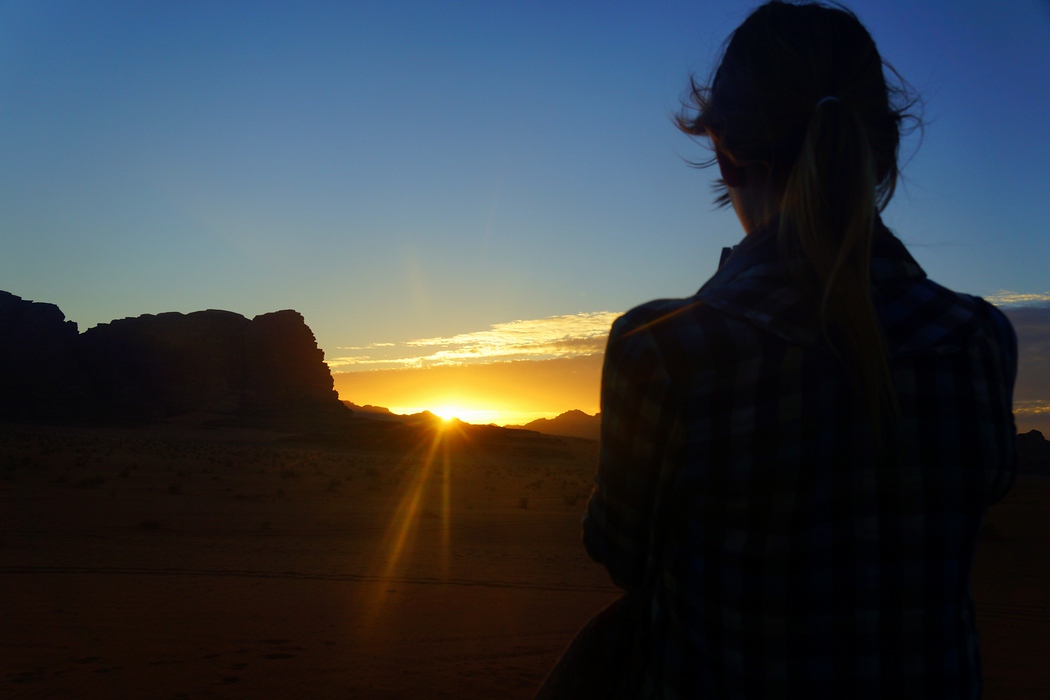 This is a sunset shot from our Wadi Rum tour where Audrey is rendered as a silhouette. Our guides specifically took us to this particular point roughly half an hour before sunset. We certainly were not disappointed.

As a travel photographer it is paramount to look back every once in a while. This particular shot was taken from the back of our pickup truck after it stopped for a few minutes. Looking back I noticed the spectacular cloud formations in the sky. 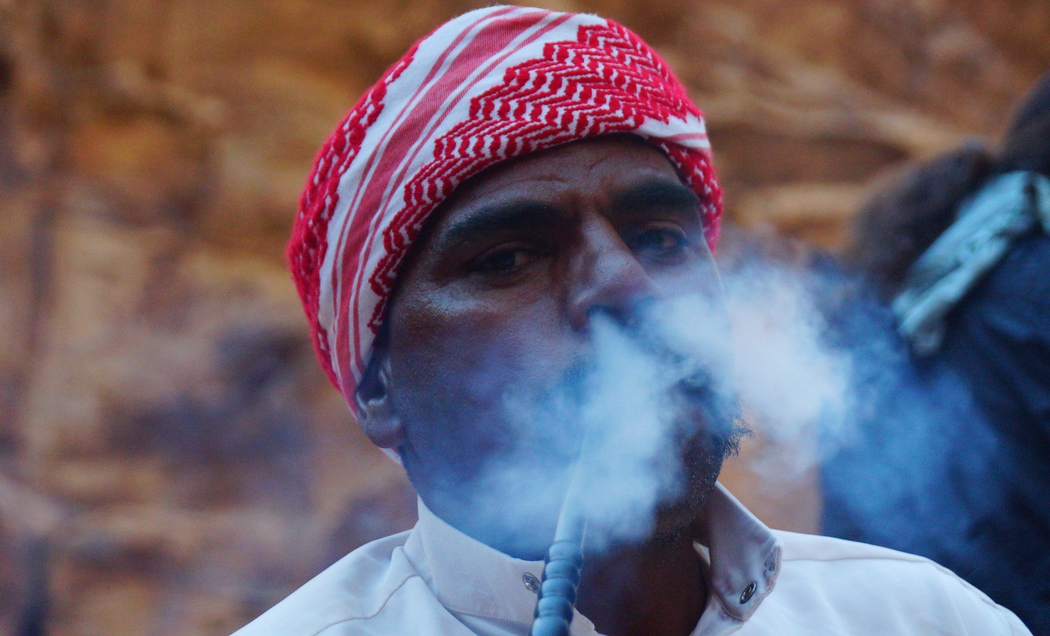 Here a Bedouin man puffs smoke out of his nose just outside of tent in Wadi Rum. Smoking hookah, know locally as Arghila or Shisha, is very common in Jordan. You can select tobacco with an assortment of different flavours. My personal favourite is apple mint.

Sleeping in a Bedouin tent was one of the top highlights from my time visiting Jordan. Here a group of Bedouin men prepare a camp fire at night that would later be used to serve tea. 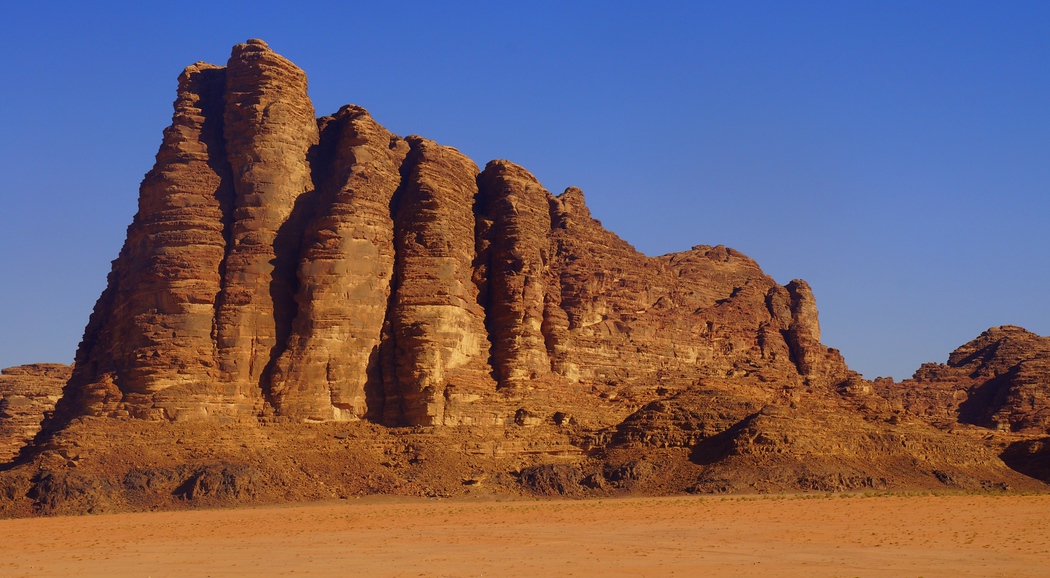 This is a shot of Seven Pillars of Wisdom Mountain in Wadi Rum, Jordan taken just after lunch. Can you spot all seven? 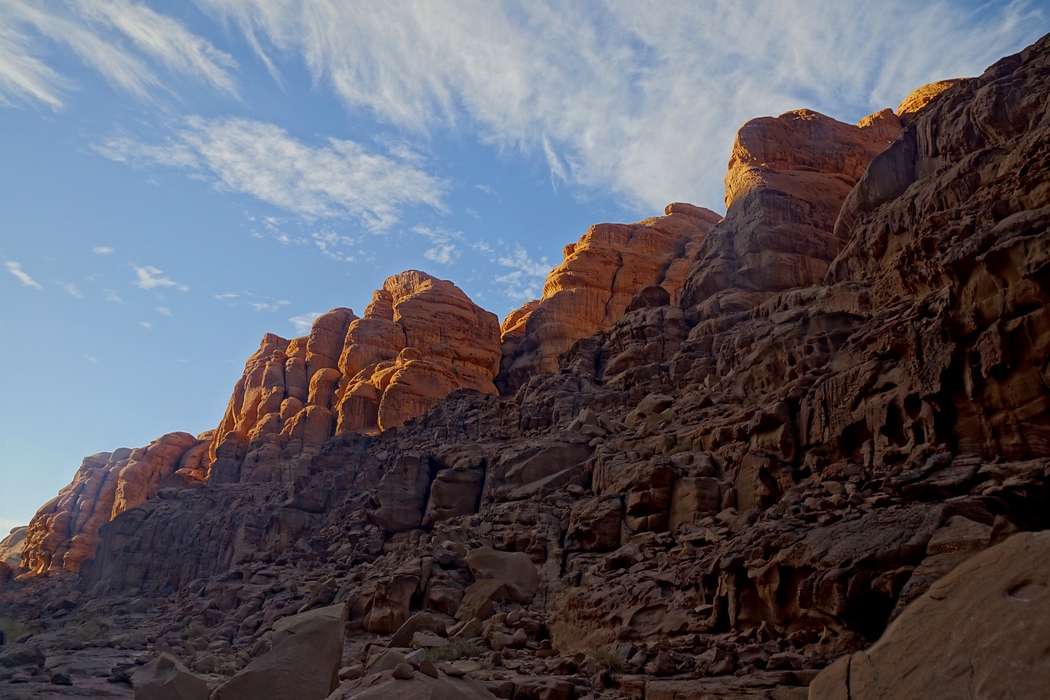 The rock formations are especially impressive at Wadi Rum. I’m not a huge fan of HDR photography but I found myself taking several of these types of shots given the contrast between harsh shadows and light. 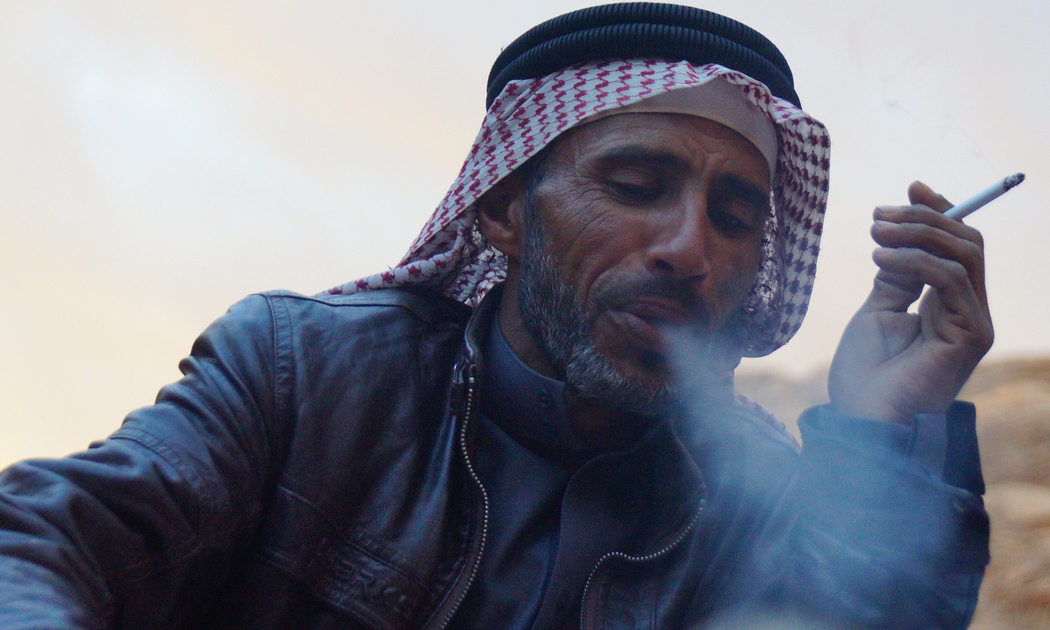 A Bedouin man puffs exhales smoke from a cigarette nearby our camp in Wadi Rum. 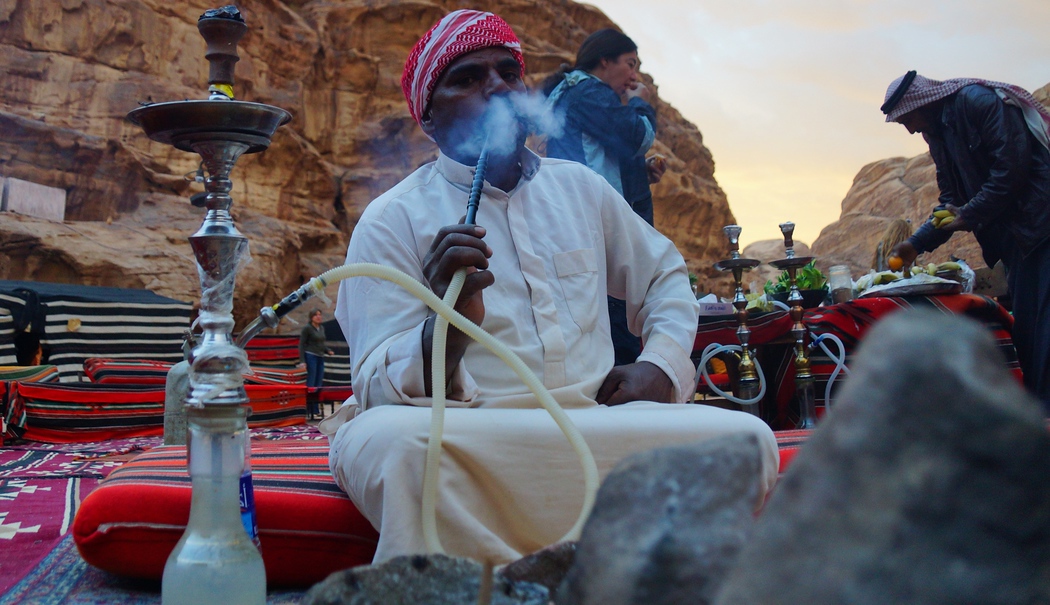 This is another shot of the same Bedouin man from the third photo in this gallery smoking Hookah. In this particular photo you can clearly notice the smoking device and rock terrain in the background.

This is a photo rock formations during a spectacular sunset in Wadi Rum. As a travel photography tip, it’s a good idea to not only focus on the sunset. Look around and you’ll often notice other subject areas worth shooting. 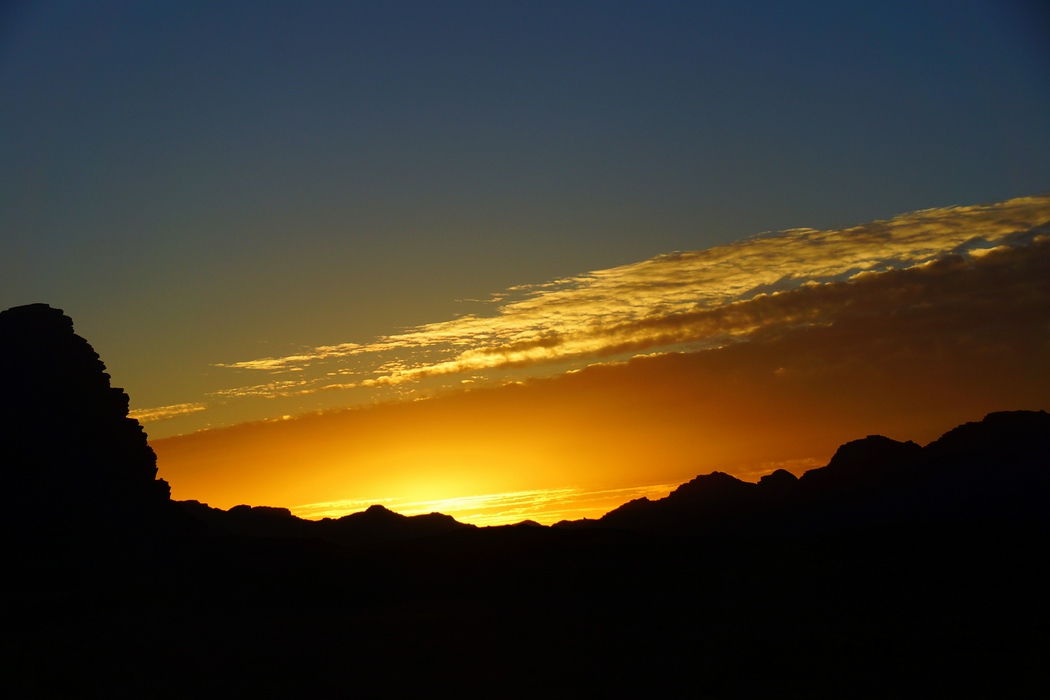 This is a telephoto shot of rock formations during sunset in Wadi Rum, Jordan. 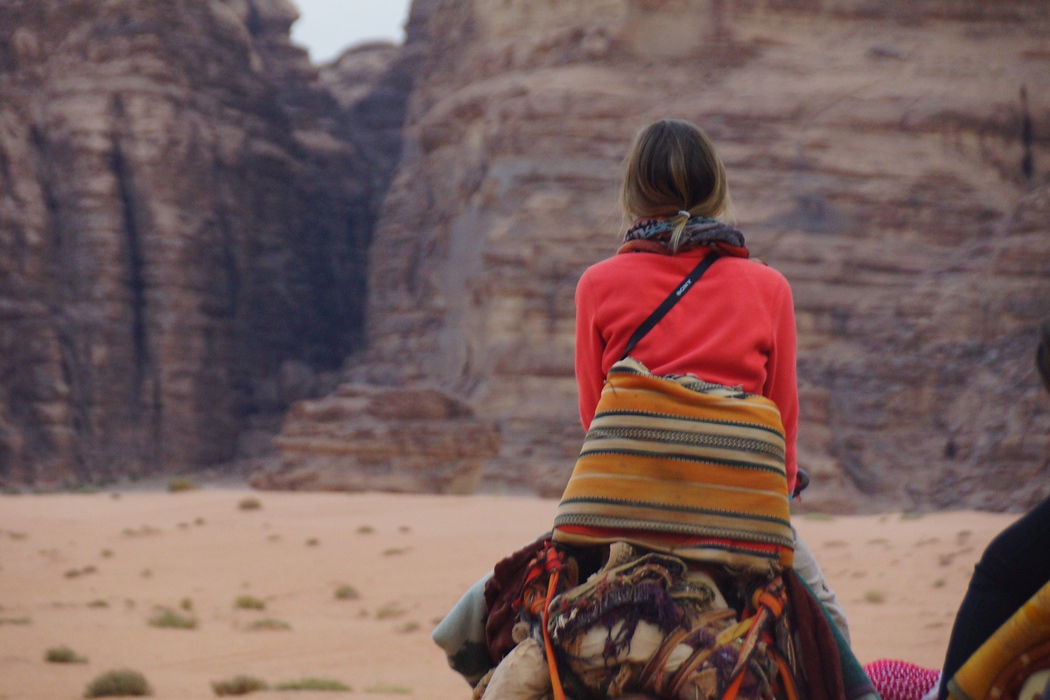 This is a travel image of Audrey Bergner riding a camel for the first time. She did remarkably well and looked rather graceful for somebody with very little experience riding animals.

This is an action shot of a Bedouin boy and Dustin Main riding camels in Wadi Rum, Jordan. You’ll notice Dustin wielding his dSLR camera in his hands. He took a lot of photos of our group which we greatly appreciated. 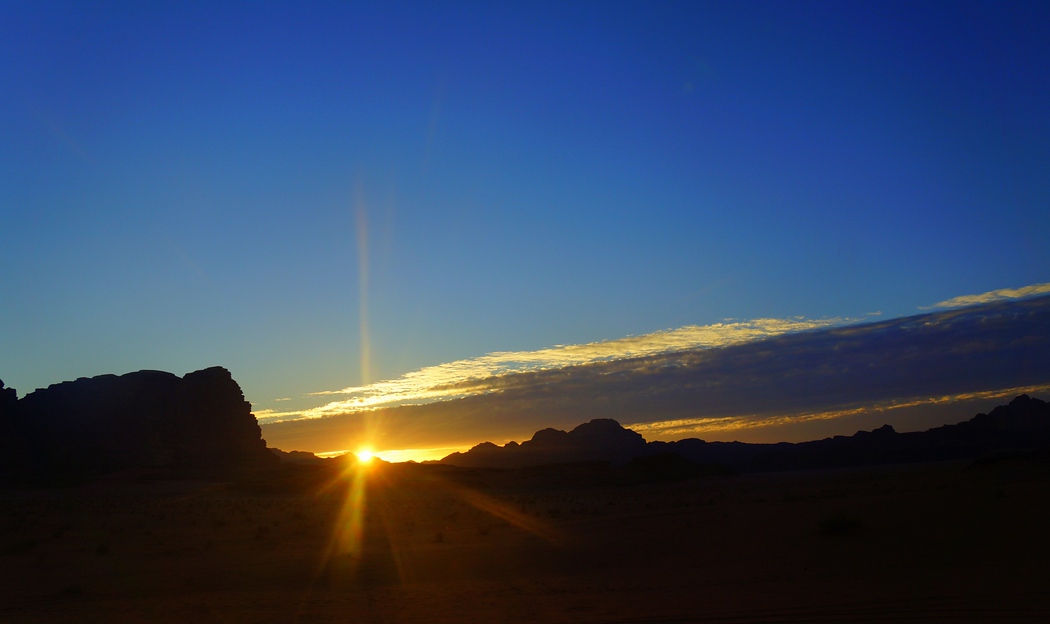 This is another perspective shot of rock formations during sunset in Wadi Rum, Jordan. This was the nicest sunset we witnessed during our entire time in Jordan. 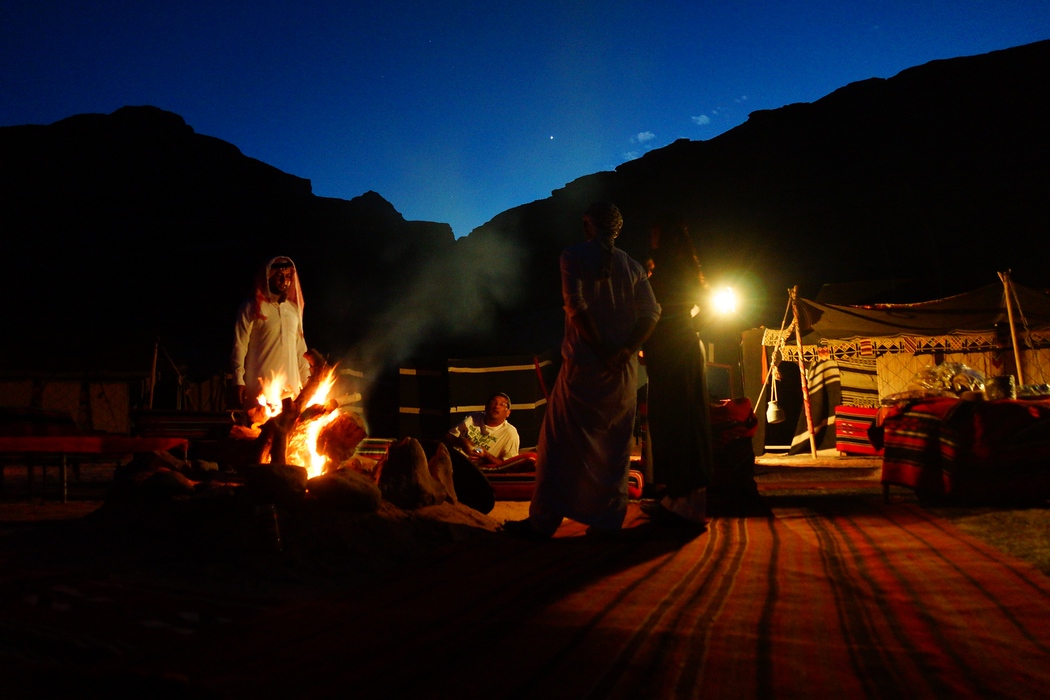 I was a little under the weather at the time and having an opportunity to lounge by the camp fire prior to going to sleep was the coziest option at this Bedouin camp.

In this photo you can notice several mattresses that were used to sleep on around the camp fire at night. 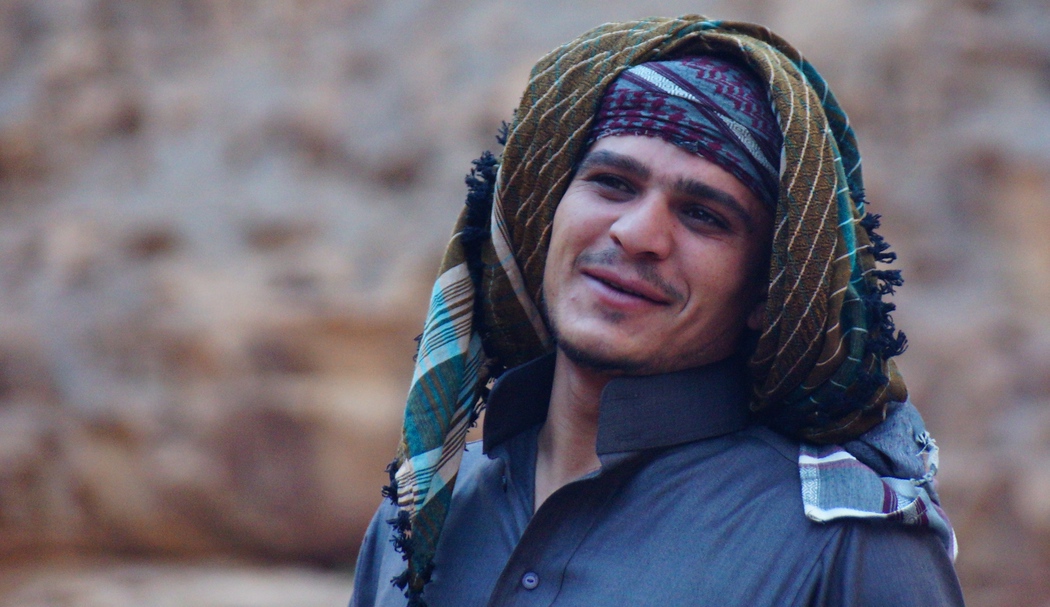 This is a candid portrait of a Bedouin man smiling early in the morning before breakfast. 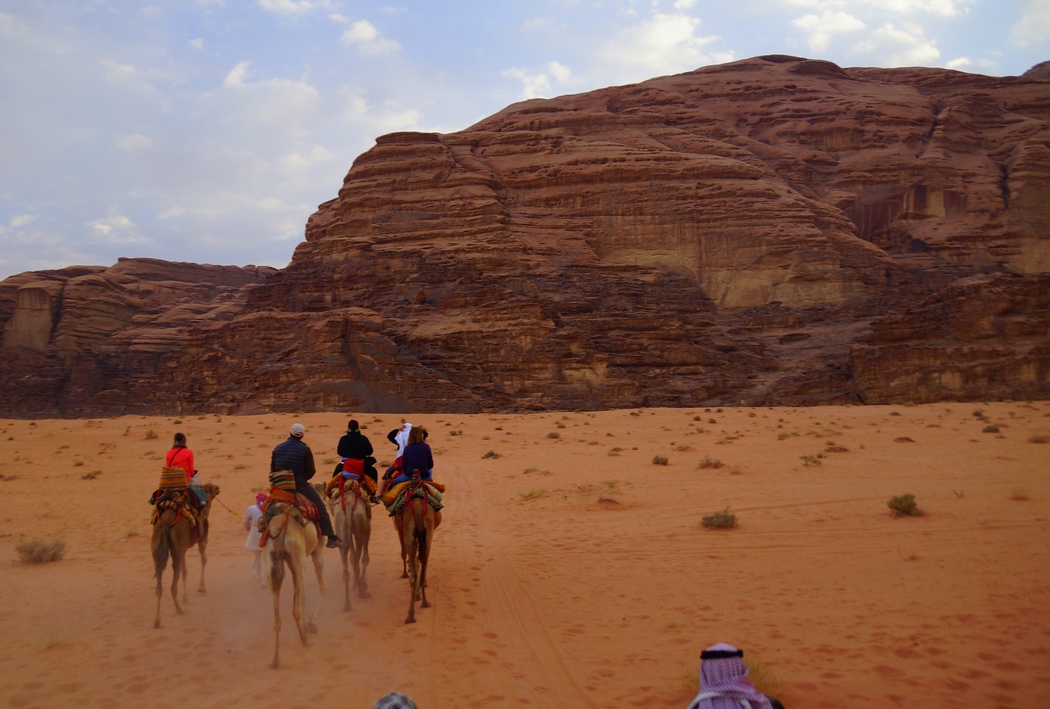 Here is another group shot of us riding camels. Can you spot Audrey? 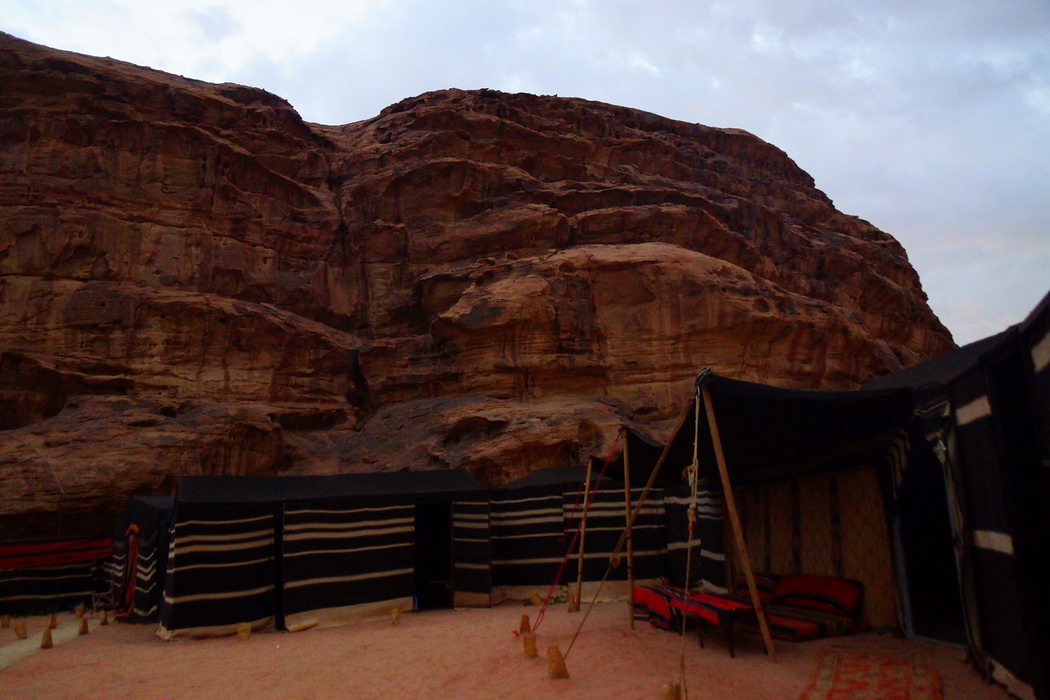 Here is a photo of the tents we used while camping overnight with the Bedouins in Wadi Rum, Jordan. Inside our tent were sample mattresses, warm blankets and candles. 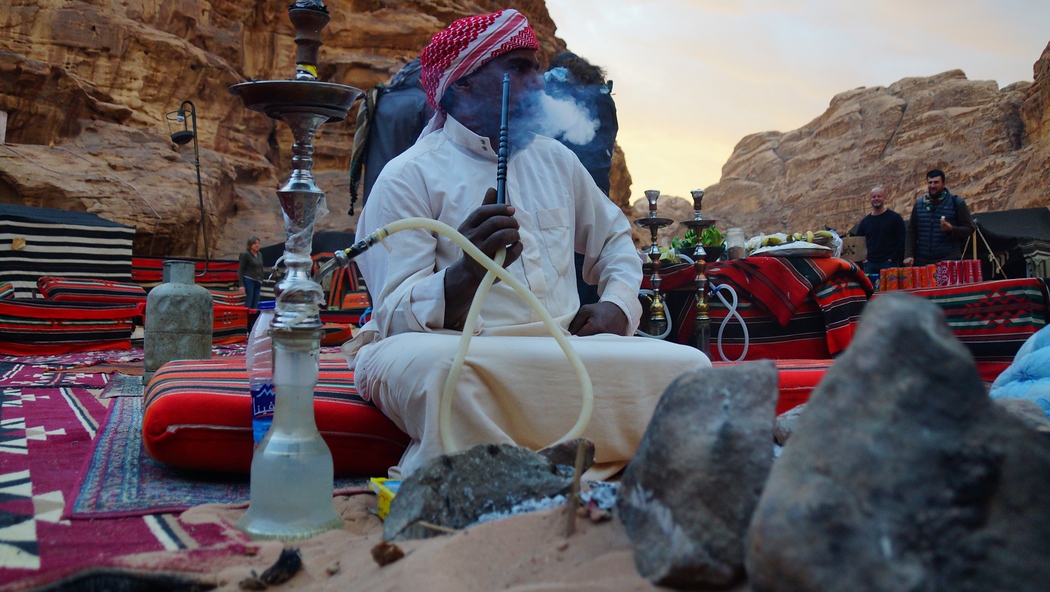 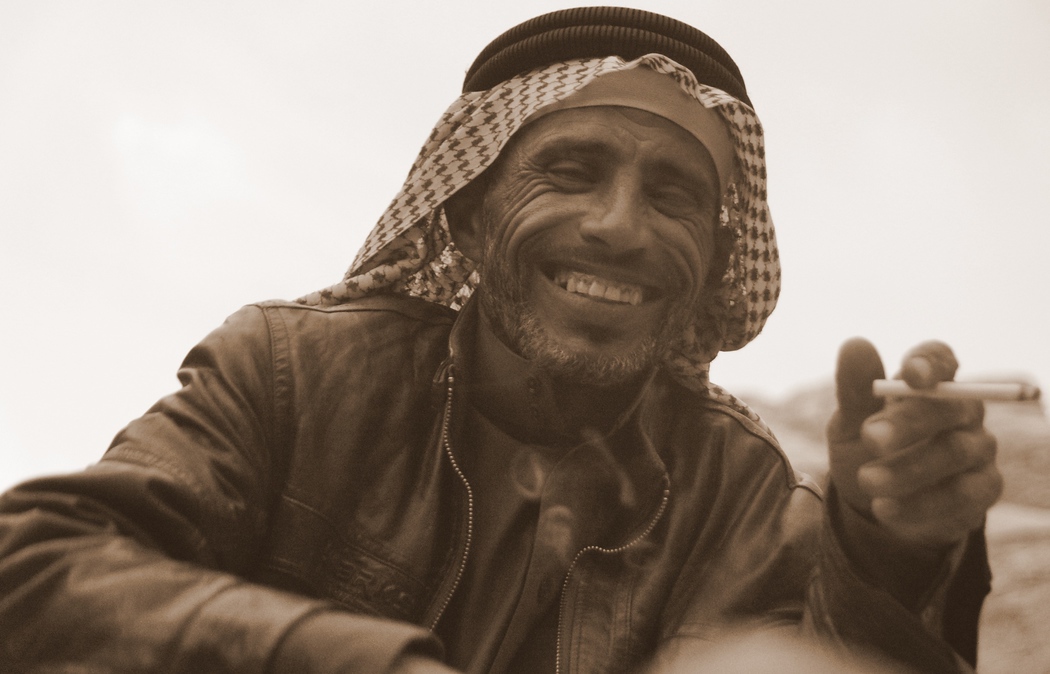 Here is a candid shot of a Bedouin man smoking a cigarette and beaming an even more impressive smile.

For this trip we partnered with My Jordan Journey.