As I wound my way around the final flight of steps, I pushed open a humble door that granted me access to the top of the roof.  I panted frantically as I was exhausted from hauling my two suitcases chock full of all the belongings I packed from home that I deemed necessary just 24 hours ago prior to departing from Canada.

I looked at the structure my Korean director was eagerly waving me towards and immediately thought internally, “No way.  This can’t be it.”

What was directly in front of my eyes was nothing more than a makeshift shack, a temporary housing structure situated on top of this residential roof.  Its crumbling white siding led way to a sliding door that was caked with dirt.

As I dropped my suitcases off and finally caught my breath the reality of the situation was finally starting to sink in.

I will be living in this place for an entire year while teaching English in Korea.

What on earth have I gotten myself into?

Aaaaah, it sure can be fun to look back in hindsight to laugh at yourself.  What I described above was my Korean apartment (er…Shack on top of the roof) that I lived in during my first ESL teaching stint way back in 2005-06.  On days when my morale was high and I was in a peppy positive mood I would consider it to be my crumbling artists loft; however, on days that weren’t quite as rosy and stellar the reality was that I was living in a shit tin can on top of a roof.  Korea, with its brutal winters and impossibly hot and humid summers, nearly did me in that year as I often resorted to extreme measures (electric blankets & heat fans in the winter; 3-4 cold showers & wearing nothing but my undies in the summer) to cope with the predicament I was in.

I’ve learned a lot since that time.  First and foremost, I’ve requested; NO, I’ve demanded  since that initial teaching contract to actually ‘see a photo’ of the place I’m signing my life away before putting my signature on paper. The truth is that I’ve loved all of my apartments in Korea since that initial debacle of a place has long since been in the rear-view mirror.  Having my own free apartment and sense of autonomy and space has been one of the main reasons I’ve loved living in South Korea over the years.

With all of the jobs I’ve had in Korea over the years my apartment has always been provided for me as part of my contract.  I’ve lived on top of a roof, on the 17th floor of a high rise apartment & in an officetel.  Each experience has been radically different aside from one unifying factor:  they’ve always been tiny places compared to apartments back home. 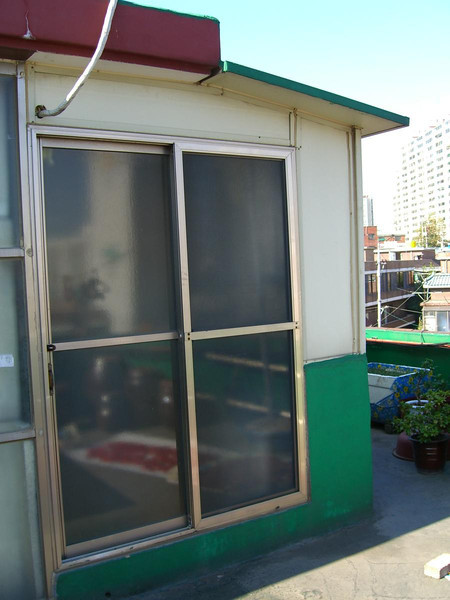 More views from the humble shack on top of the roof 🙂

In this video I’m giving your a tour of my most recent Korean apartment.  From views of the rice fields from the entrace of my front door to an up close and intimate encounter with my bathroom, nothing is spared 😛  You’ll notice my bedroom that is surprisingly bare.  I take you into my kitchen where I’m running low on condiments, bread and orange juice.  Not exactly the bounty of Korean food you likely expected from a high rolling ESL teacher eh?  Normally I head out to grab a bite at a local Korean kimbap places or occasionally a Korean fast food joint.   Finally you’ll get to see what a typical ‘wet’ Korean bathroom looks like; however, not without first putting on flip flops.  Come check out Audrey’s apartment in Korea for a completely different tour of an officetel. 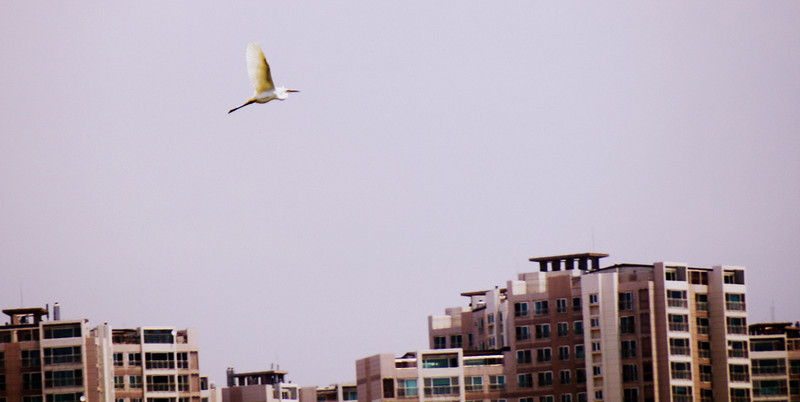 Some of my friends and family have been truly shocked by my the size of my apartment.  What do you think?  Could you live in a place like this?  It’s where I’ve called ‘my home’ for the last 10 and a half months.  It’s humble and certainly nothing special but in some ways I’ll be sad to leave when I pack up my bags six weeks later and head home to Canada for the holidays.