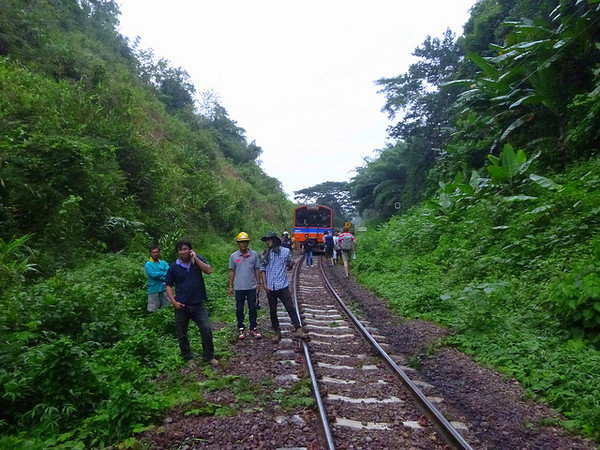 Lugging my backpack in near pitch black conditions, I moved one foot after another traipsing along decaying tracks that reeked of feces and urine as I emerged from a desolate tunnel. This probably sounds awful. 99.9% of the time I don’t think I’d enjoy this situation; however, I felt relieved to have finally escaped from our train that had several hours ago derailed en route from Bangkok to Chiang Mai.

On our way from Suvarnabhumi airport to Don Muang Airport via shuttle bus, I debated with Audrey whether or not we should take a train, bus or plane. “The plane will certainly cost more,” she said. “Well, if we take the bus it’s certainly the cheapest option,” I murmured: “Hmmmm, how about taking the train?” 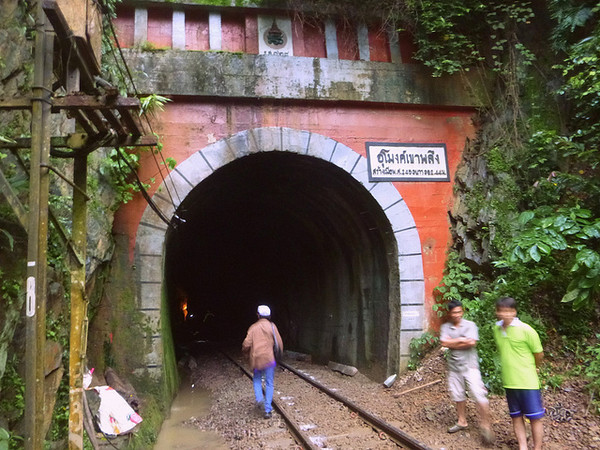 Taking the train had been by far our preferred method of transportation anywhere we’ve traveled together. While in Vietnam, the incessant honking, sudden swerving and wanton sounding of the horn ensured we rarely (if ever) got a decent night’s sleep when we took overnight long haul sleeper buses from Nha Trang to Hoi An and from Hoi An to Hanoi. When we traveled in the posh ET Pumpkin carriage from Hanoi to Sapa, the soothing swaying reliable motion of the train ‘baaaa-thump….baaaa-thump’ rocked us to sleep. We both marveled how refreshed we felt after sleeping the entire night on the train as opposed to the bus.

We arrived at Don Muang station looking like a couple of greasy thugs profusely sweating and knackered from the combination of two consecutive flights from Europe combined with our bodies in shock at going from the moderate summer temperatures of Helsinki to the sweltering heat and humidity of typical day in Bangkok.

Desperately wanting to return to our home in Chiang Mai, we quickly snapped up the last tickets available on the train – a pair of first class sleeper booths. I looked over at Audrey and rolled my eyes: “We never pay for first class; second class sleeper is a splurge for us.”

As we boarded the train we quickly settled into the lower and upper bunks of our private air conditioned room. Soon after relaxing for a few minutes we ordered a Thai curry that we shared together. The rich spicy red curry duck and assorted vegetables with rice reminded us how much we loved being back in Thailand. Feeling the effects of jet-lag, we soon retired to our respective bunks. The familiar gentle back and forth motion of the train quavered us to sleep; suddenly, the gentle motion of the train turned to a screeching halt as it careened off the tracks.

Frantic, I reached for the sidebars of my upper booth and grabbed a hold of them – with a white knuckle death grip – fearing I’d suddenly be propelled off of my bed like a slingshot.

The train finally came to a grinding halt.

Certain we had jumped off the tracks!  I looked down at Audrey who appeared much calmer: “No, we just stopped abruptly by a station”

I jumped out of the upper booth and started exploring around the rest of the cabin. Other passengers looked shell shocked and confused. None of us had any idea what had just happened. As I peered out the window it was pitch black outside.

Suddenly a Thai lady attendant chased down another farang who had just sauntered out of his room: “You pay for beer. Pay for beer now.” This was all a bit too surreal for me to handle.

As more passengers came out of their private booths information and rumours started to spread like wildfire.

Are we trapped? Is this a tunnel? Did we actually derail? A rescue train is coming to pick us up? What? Buses?

Finally, another Thai attendant came to calm us down coercing us to go back into our private rooms and sleep for a while; apparently, a train would be arriving in roughly 3 hours.

Not really knowing how grave the situation was at the time, we both drifted back to sleep for several hours only awakening to a loud thumping noise: “Get off of the train.”

As we climbed out of the train a series of flashlights guided us down the tunnel to a trolley that was evacuating both passengers and luggage.

Audrey grabbed her point and shoot camera and fired off a few exposures.

After a short distance was covered I looked back at the train; it was clear to me at this point, it had in fact derailed. 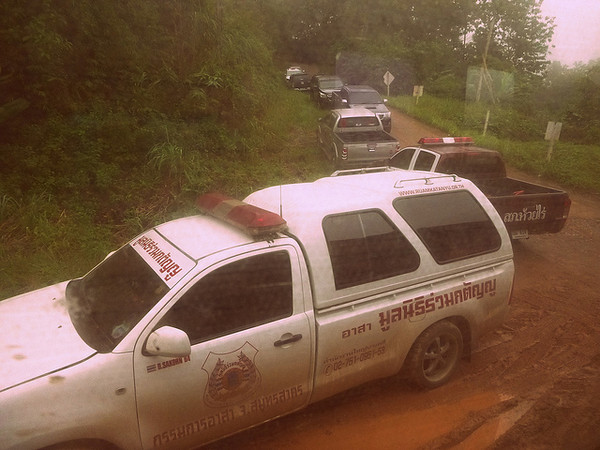 The aftermath of all of this was that we eventually were all evacuated from the tunnel and transported to Sila-at railway station where a fleet of double-decker buses awaited us – eventually transporting all 415 passengers to Chiang Mai not a single one of us was injured. 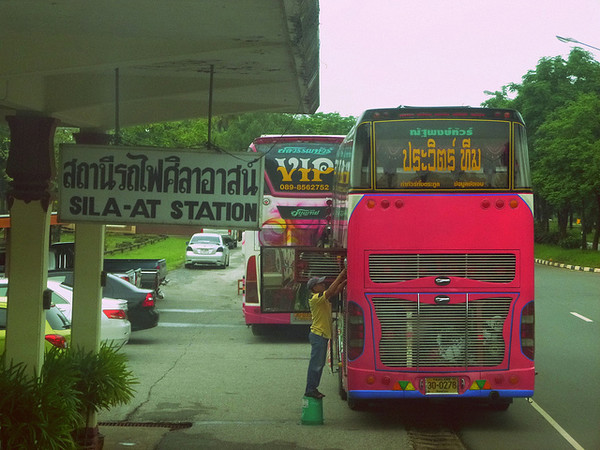 On the bus, a Thai man responsible for coordinating the rescue efforts started to crack jokes: “You so lucky. You pay for train and you get a bus too. We’ll arrive 5 hours later – no extra charge.”

Skittishly, I, along with most of the other passengers, laugh at his attempt to inject a little humour into what was several hours ago a life and death threatening scenario.

Apparently our situation was not a select or freak accident. Thai trains, especially on this particular Chiang Mai – Bangkok route, have been derailing frequently. Antiquated carriages and archaic tracks are the chief culprit as opposed to driver error or recklessness. After doing a bit of research, I couldn’t believe what I was reading. An accident mere weeks before our crash – another one shortly after. I’m the type of person who is safety cautious; how could I have not realized this?

Prior to our derailment, train travel was by far my preferred method of transportation. When I fly, the slightest amount of turbulence can send my mind down a slimy rabbit hole where I start thinking the most morbid of thoughts. I’ve experienced far too many bus rides with a kamikaze driver – seemingly hell bent on risky the lives of all of the passengers on board – playing chicken with oncoming traffic to shave a few minutes off our journey. Until our crash, I had never once felt nervous on a train; that’s now changed.

Would I ever want to take a train again?

Yes, it’s still my preferred method of getting from point A to B. Having taken the train several times since our accident, I don’t feel quite as relaxed as I once did. When the train suddenly changes tracks or there is an unexpected thump, I now react with the same tension and anxiety I experience while on a turbulent flight or a swerving bus; however, it’s not a dis-empowering fear that leaves me incapable of hopping on board. I just no longer feel invincible on a train.

Accidents and illness are often a reminder that we’re mere mortals. I found myself feeling an extreme sense of gratitude that our train derailed where it did (inside of a tunnel) as opposed to several kilometres behind us where unforgiving terrain would have sent us plummeting vertically downward. It’s these kind of events that make you realize life is a game of inches.

Have you ever been on a train that derailed? A car crash? A scary plane ride? Please share your stories below.