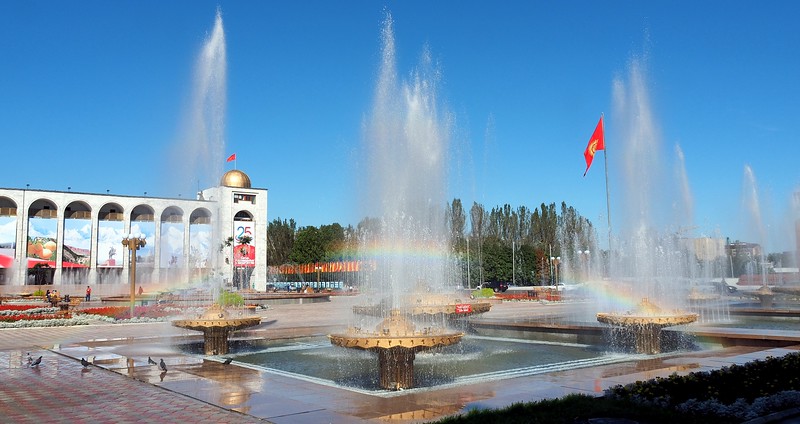 Views from Ala-Too Square on a gorgeous sunny day with a rainbow in Bishkek, Kyrgyzstan

Most cities we visit offer an overwhelming amount of activities and places to visit, so much so, that we often find ourselves making compromises in order to cover the places we’re most interested in. This was not the case for Bishkek where to-do-lists are best tossed out the window. At first glance, the Kyrgyz capital doesn’t appear to offer much in terms of attractions, but we quickly discovered this is the kind of place that you need to experience – sit back, relax, and see where it takes you. It’s only when you linger in Bishkek and start chatting with expats and locals, that you begin to discover that this city is home to a whole slew of quirky sights, trendy cafes, relaxing parks, underrated attractions, and imposing monuments. Bishkek won us over in a matter of days and by the end of our visit we understood why so many travellers choose to linger here and others find a way to call it home. But now on to the sightseeing; in this post I’m going to show you 15 things to do in Bishkek on your visit:

15 things to do in Bishkek 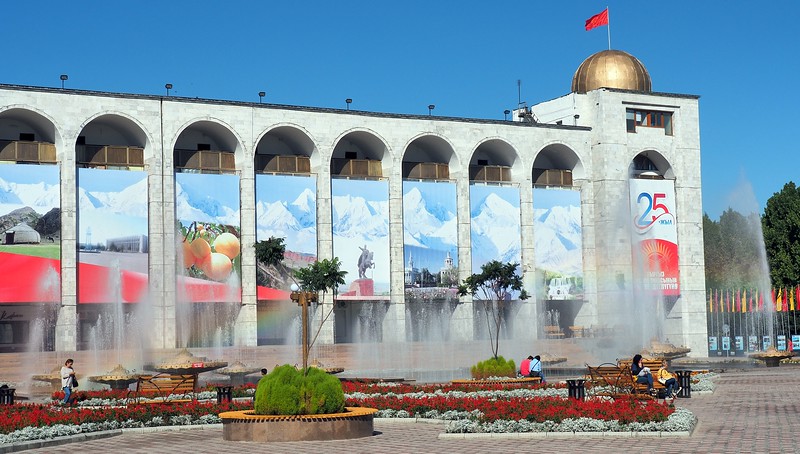 First up, we visited Ala-Too Square, which is the central plaza in Bishkek. While there isn’t much to do here, it’s one of the city’s major landmarks featuring plenty of benches and water fountains where you can take a quick break. Built in 1984 to celebrate the 60th anniversary of the Kyrgyz Soviet Social Republic, here you’ll also find a statue of Manas commemorating the 20th anniversary of Kyrgyzstan’s independence. State events and celebrations take place here along with occasional protests.

Just across the street you’ll find the State Historical Museum. Unfortunately, it was closed for renovations when we visited but if you wander around the back of the building you’ll find an imposing Lenin statue. When open to the public, it houses an eclectic collection of Soviet era items along with mementos from the 2010 revolution.

Another place you’ll want to visit in Bishkek is the Osh Bazaar. It may not be the biggest in Central Asia, but it’s a bustling hive of activity where you could easily spend several hours. We had no problems at the market, but we were warned by expat friends and locals to ignore the fake police who may ask to see documents and camera permits. Inside the market you’ll find fresh produce, local snacks and clothes. If you’re adventurous with your tastes buds, be sure to try the dry cheese balls which taste a bit like salty goat cheese. Our find of the day was a half of kilo of dates for 100 Som (roughly $1.50 USD). Bargain!

Remember my earlier spiel about Bishkek being a little quirky? The city has plenty of abandoned buildings to explore, none being more fascinating than the forgotten casino. Here you’ll find graffiti, smashed objects and possibly teenagers hanging out. Be sure to bring closed shoes as there is an abundance of broken glass on the ground.

Directly across from the abandoned casino, you’ll find the Victory Monument which was built to commemorate the 40th anniversary of World War 2. The three curved arcs represent a yurt, and the sculpture of a woman standing near the eternal flame is meant to symbolize her waiting for her husband and sons to return from the war.

I spent more time in Erkindik Park than anywhere else in Bishkek. Whether I was jogging to burn calories or licking ice cream to gain them back, I couldn’t get enough of this place. Popular with locals, especially on the weekends, you’ll find this park lined with trees charming at all of times of day. It tends to be quieter in the mornings and busier in the late afternoon and early evening.

I’m a sucker for saunas and public baths! If I touch down in Finland or South Korea, spending ample time at the sauna is an absolute must. When I found out Bishkek had a popular bath house I just had to check it out. Separated by gender, you strip down to your birthday suit and alternate between steam rooms and saunas. I went to check out the polar plunge dome with ice cold water. As I was tip-toeing my way down the ladder I was suddenly thrust face first into the pool. Gulping water I immediately swung my head back and noticed a burly man of Kyrgyz World Nomad Games proportions looking down at me with his arms crossed. I had just been pushed into the pool by another grown naked man. I didn’t even know how to react. I just ended up swimming to the other end. Aside from being shoved I did enjoy my experience at Zhirgal Banya. 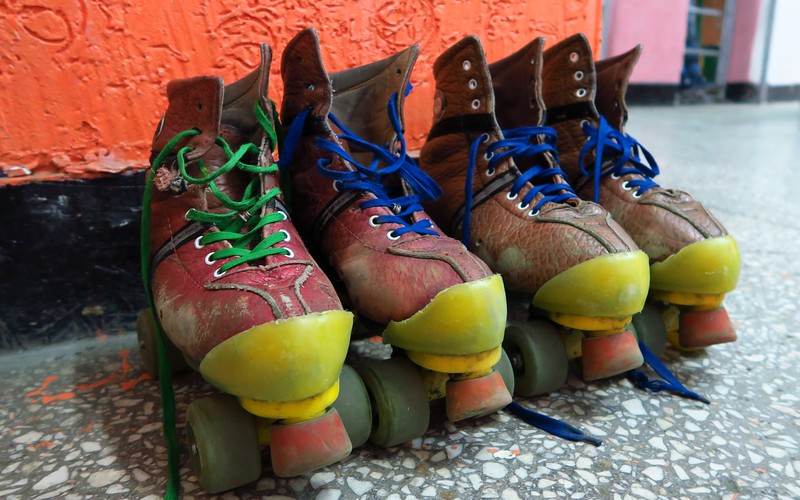 Our pair of roller skates that we put on to go rollerskating in Bishkek, Kyrgyzstan

Found a warp tunnel where you can time travel back to the 80s? If not, may I suggest visiting the roller rink in Bishkek? I thought roller-skating would be a lot like ice skating and/or rollerblading; I was wrong. I’m sure my bambi on skates impression provided plenty of humor for the mostly local teenage clientele.

We missed the start of opera and ballet season by just a few days, however, if you’re in the city at the right time, that’s something you could consider doing as we heard the performances are top notch.

If you’re interested in chillin’ like a villain you’ll find Bishkek has a collection of worthwhile cafes to pass an afternoon. Check out Q cafe where you’ll slurp on gourmet coffee and chow down on freshly baked muffins and Dvorak cake. 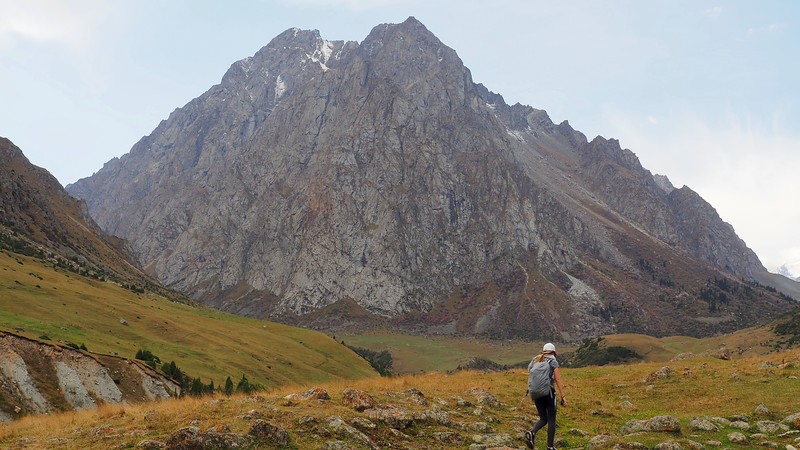 Mountain views as we hiked Issyk-Ata Gorge as a day trip from Bishkek, Kyrgyzstan

11) Hiking outside of Bishkek with Trekking Union

If you’re craving a day-trip from Bishkek, you can always plan a hike to the nearby mountains with the Trekking Union. With hikes happening every weekend you’ll find yourself out in nature with good company along the way. Make sure to bring plenty of water, snacks and proper footwear. Also, don’t be shocked if the 12 kilometer hike you’ve signed up for is actually a 25 kilometer jaunt.

VIDEO: Hiking in Kyrgyzstan
If you have trouble viewing this video click here:  http://youtu.be/Bj-uHZV_aVQ

As far as traditional Kyrgyz food is concerned, there’s plenty to sample ranging from grilled meats to dumplings, and noodles to mixed rice. If you’re so inclined, there’s also fermented mare’s milk (kymyz – Кымыз) which is a flavour you won’t soon forget. International options are also plentiful in Bishkek with some great steakhouses, Japanese and Korean restaurants. Our favorite was Chicken Star where you can enjoy spicy Korean chicken and tteokochi spicy rice cakes with your pint of beer.

Save The Ales! I’m always up for a good cause and if you’re jonesing for a craft IPA you’ve come to the right place. Here you’ll enjoy the casual atmosphere and company of others when things get dark in the city.

You can spot plenty of flowers in various parks and gardens in Bishkek, Kyrgyzstan

With our time in Bishkek winding down, we made a visit to Oak Park which is full of peculiar sculptures and offers a nice green escape. It’s worth a visit if you’re already in the area.

Lastly, there’s Panfilov Park, where you can enjoy all sorts of carnival rides right in the heart of Bishkek. We had an enormous lunch before visiting so that meant the roller coaster was off limits for us, but it shouldn’t necessarily be for you.

Stunning snow capped mountain views off in the distance from Bishkek, Kyrgyzstan 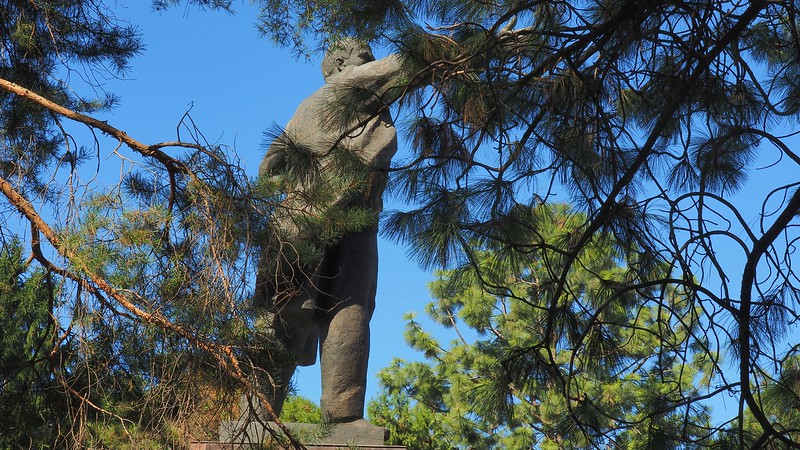 Lenin as viewed through tree branches in Bishkek, Kyrgyzstan

Standing below the Victory monument and looking upwards in Bishkek, Kyrgyzstan

Views of Erkindik Park during a quiet weekday afternoon in Bishkek, Kyrgyzstan 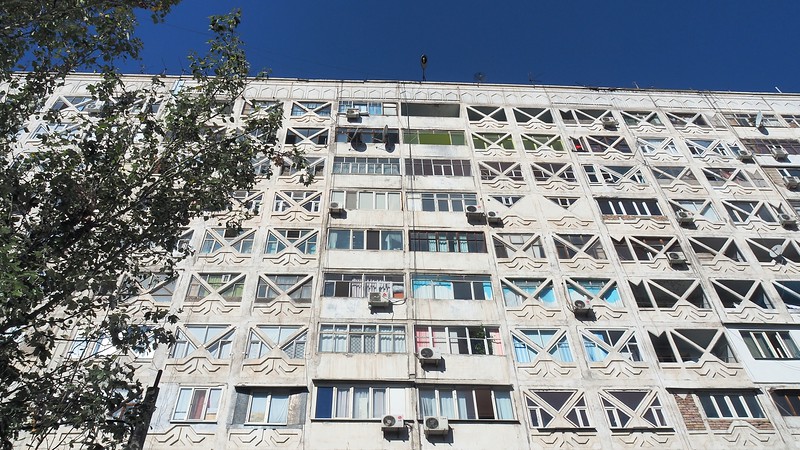 Our soviet era apartment building where we stayed in Bishkek, Kyrgyzstan 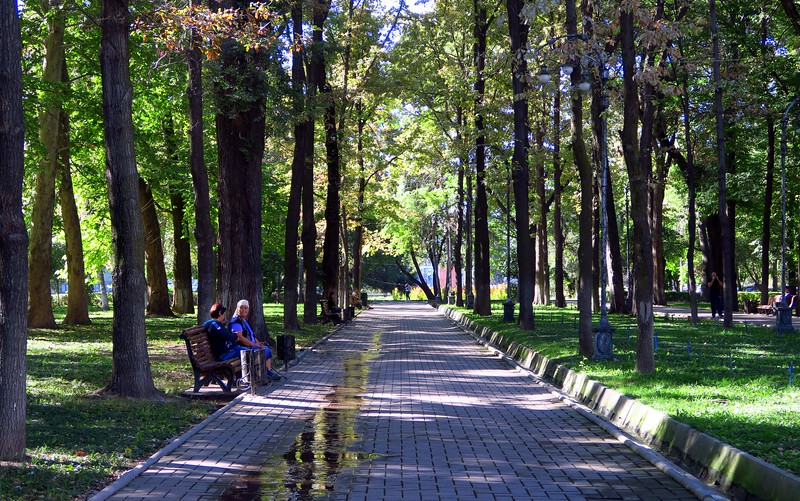 People sitting down on a park bench at Erkindik Park in Bishkek, Kyrgyzstan 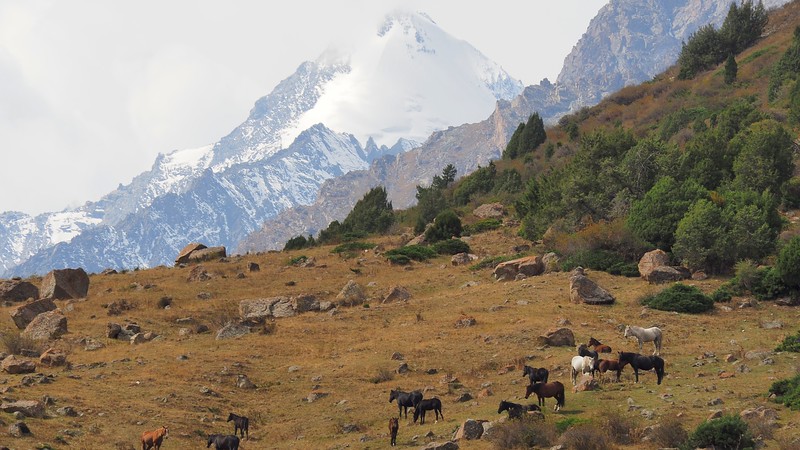 And that’s a wrap for our trip to Bishkek. This city is the kind of place that you experience as opposed to ticking off attractions, so it ended up being a fairly relaxing trip after a few busy weeks of travel around Kyrgyzstan. As always, if you have any suggestions of things to do in Bishkek, feel free to share your tips with fellow travellers in the comments section below.