Taking a moment to stop just outside of Sultanahmet, sweat poured down my forehead as I gingerly placed my long sleeve shirt on the ground while reaching into my backpack to grab a bottle of water. Moments later when I looked down at my feet, a ginger coated cat was rolling around on top of it kicking its back feet against the sleeves and chewing on the collar while purring loudly.

I would expect this kind of scene at the house of friend; however, in Istanbul, feral cats are not ‘merely’ strays – they’re revered.

As cat lovers ourselves (in case you haven’t seen the plethora of cat cafe videos we create) this was one of the more pleasant and certainly unexpected surprises of Istanbul.

We had dreamed about wandering around the Blue Mosque and getting lost meandering through the Grand Bazaar. Our mouths watered whenever we thought of sinking our teeth into baklava or Turkish Delight. Having opportunities to pet, feed and interact with cats on the streets of Istanbul was something totally out of the blue.

There was the time when a mother cat and her kittens graciously allowed us to get close at the train station or the time when a saucy little kitty batted a slice of deli meat out of my hand while I was sitting outside to enjoy my lunch.

Over the nearly two weeks we spent in Istanbul the memories really started to mount.

Upon further research it became apparent that stray cats are highly regarded by residents of Istanbul.  Islamic legend has it that cats saved the prophet Muhammad from a poisonous snake:  “If you’ve killed a cat, you need to build a mosque to be forgiven by God.”

Most of the strays in Istanbul looked well fed and healthy – sporting a luminous coat; however, some cats – especially in some recently condemned neighborhoods – were mangy and appeared outwardly sick.

The following is a photo essay and travel video dedicated to Istanbul’s cats: 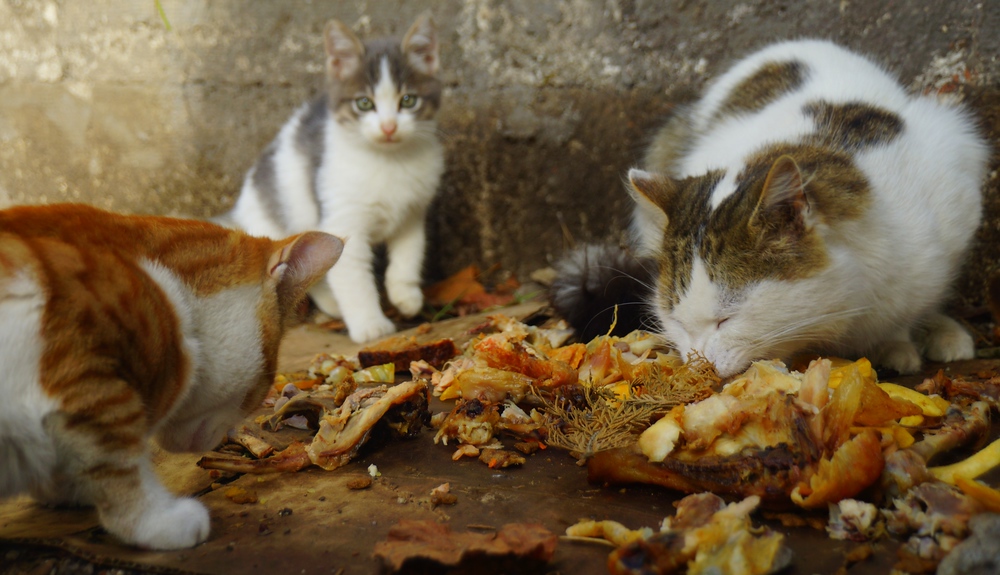 A group of cats feed on a generous bounty of food left just outside of the Blue Mosque in Istanbul, Turkey. If you look closely you’ll notice a timid kitten with cute eyes in the background. 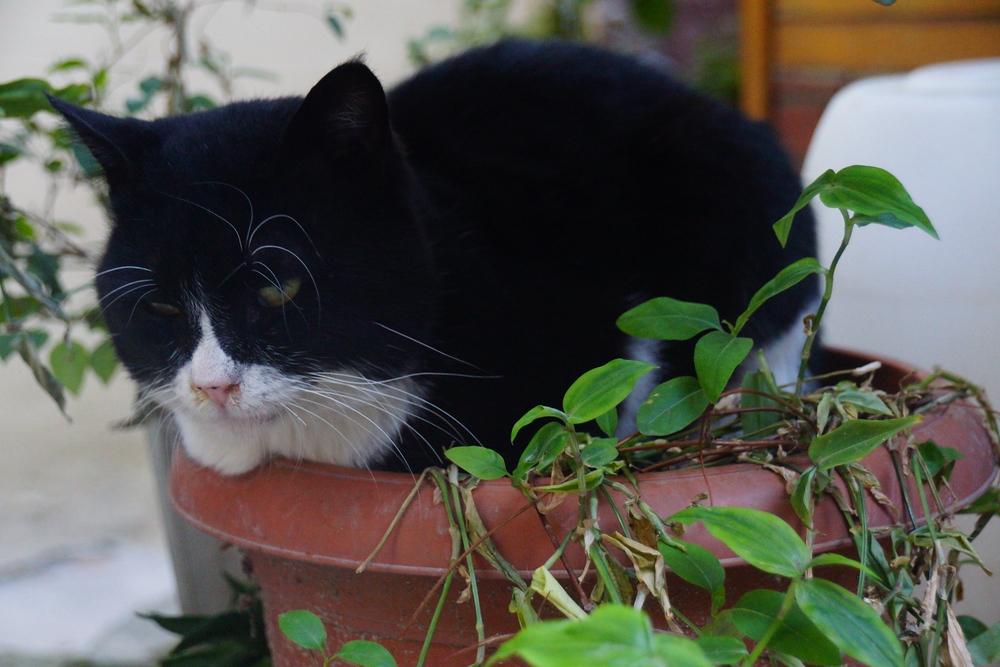 A potted cat. I spotted this particular cat on more than one occasion – each and every time – in this same pot. 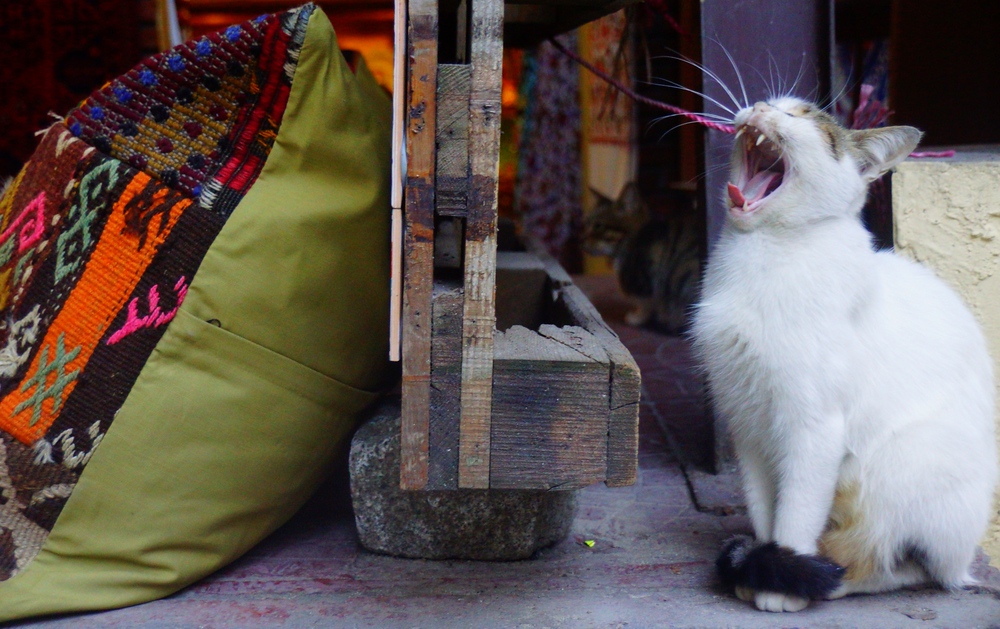 It’s just that kind of day! A cat yawning just outside of a small Turkish shop in Istanbul, Turkey.

The ultimate sign of respect and affection is when a cat is rolling around on the ground in front of you. 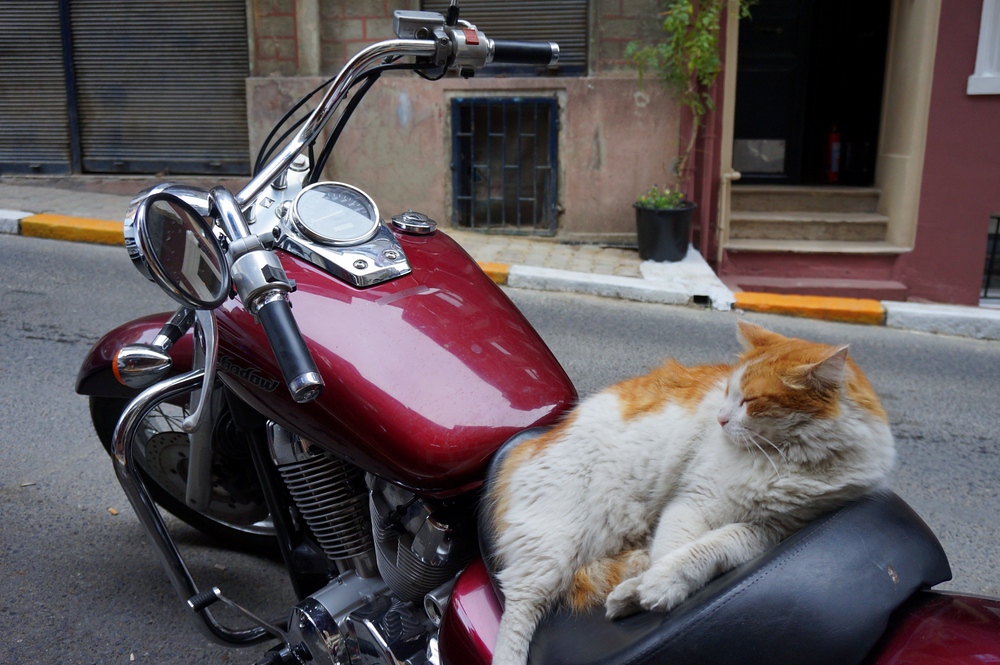 Well, why not? This easy riding cat was making itself quite at home on this motorcycle. 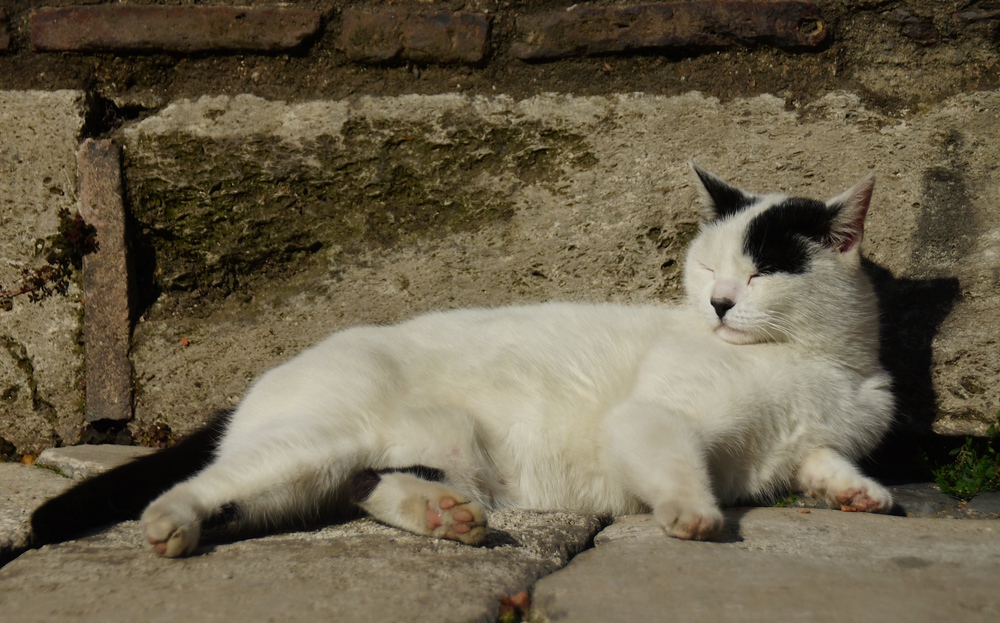 This white and black cat was basking in the sunlight.

In order to spot a cat we didn’t have to wander or look very far. In fact, at certain times of the day – especially early in the morning – it was more common to be outnumbered by cats. 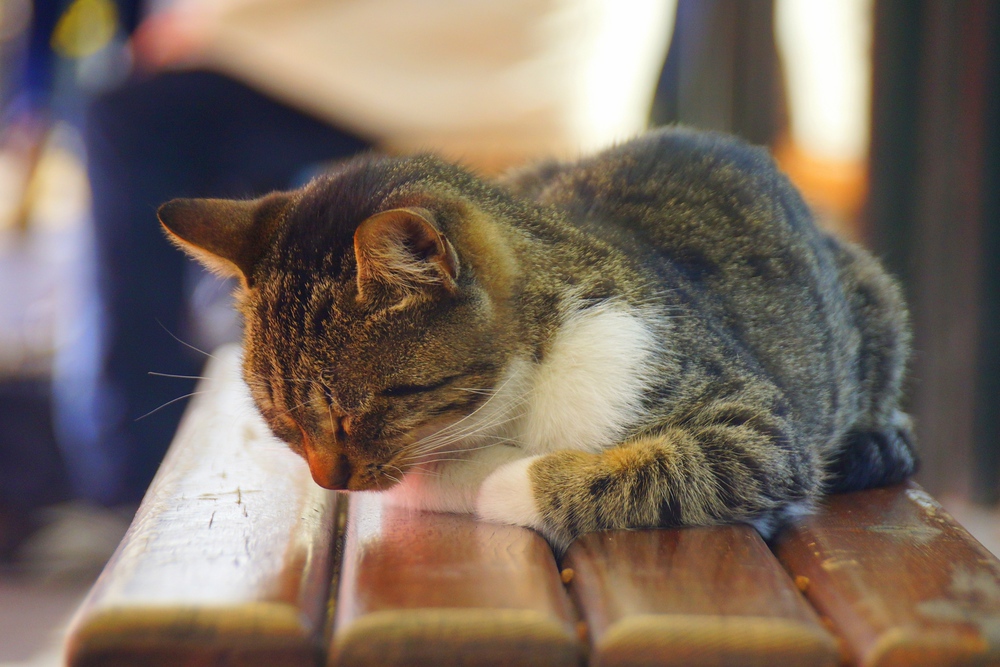 This gorgeous cat was sound asleep on the bench as we waited to catch the Light Metro.

Nearby the Blue Mosque and Hagia Sofia, was a designated feeding area for the cats where tasty cat treats were scattered for them.

I had to look up to spot this cute little kitty with distinct whiskers.

This gorgeous cat with a marmalade coat was likely looking for a few scraps of food or somebody to give it attention and affection. 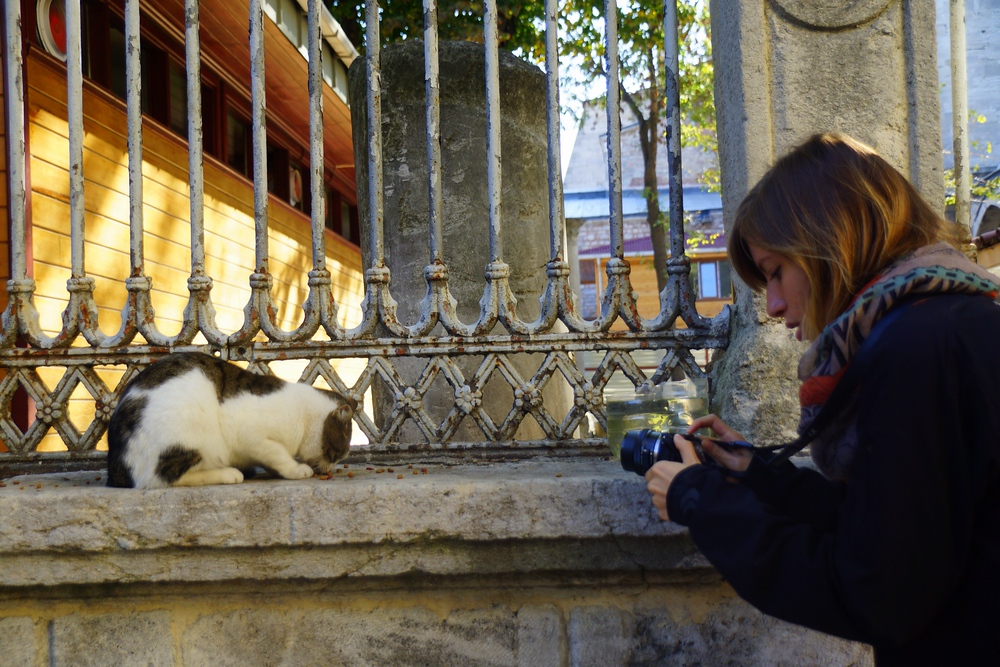 Here is a shot of Audrey taking a photo of this hungry little kitty eating. 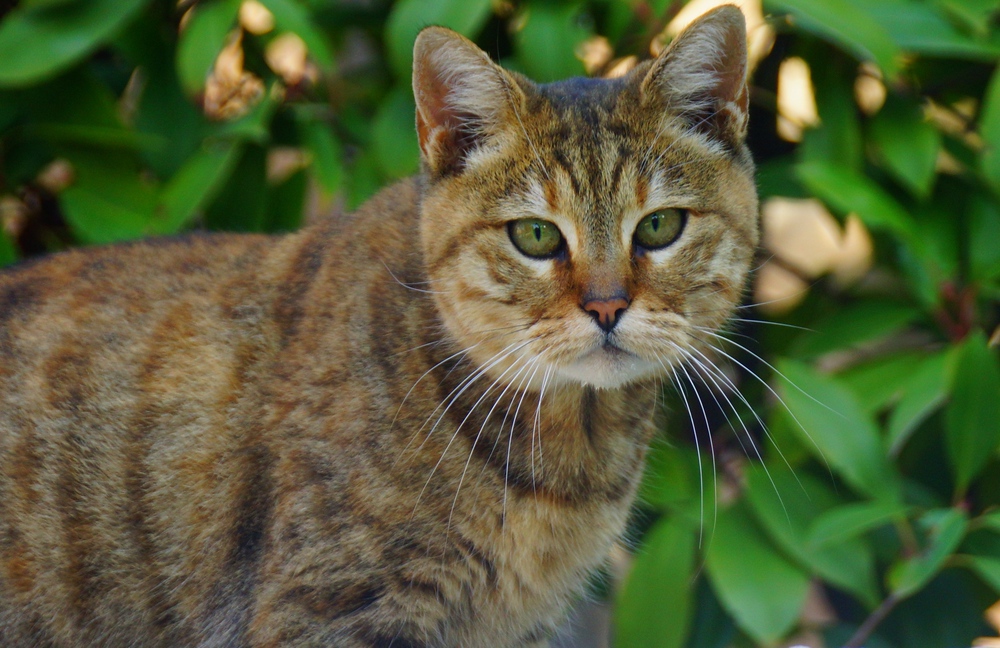 Although many of the cats on the streets of Istanbul are friendly they often have a bit of wild look in their eyes.

I wish more cities (countries) would take better care of their stray animals by providing food and assistance for them.

Here is Audrey petting a cute cat. It won’t be long before I convert her from a dog lover to a crazy cat lady. I’m already working my magic on her slowly over time 😉 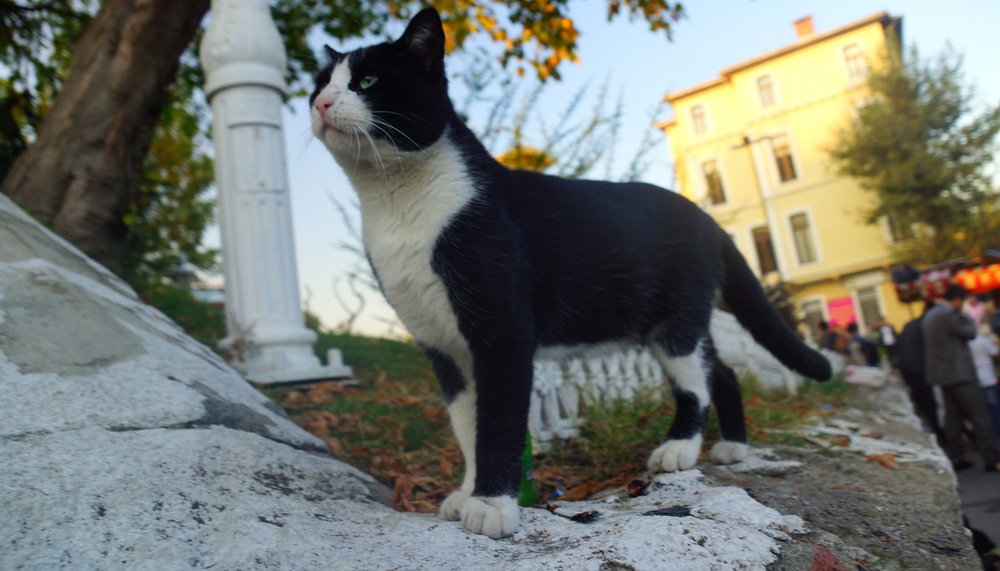 This tuxedo cat is striking a rather regal pose 😉

This cute kitten was a little timid but let me take a photo from a distance.

Not all of the cats were friendly towards people. As I approached this cat it stood its ground and I didn’t get a vibe that it would appreciate being petted. 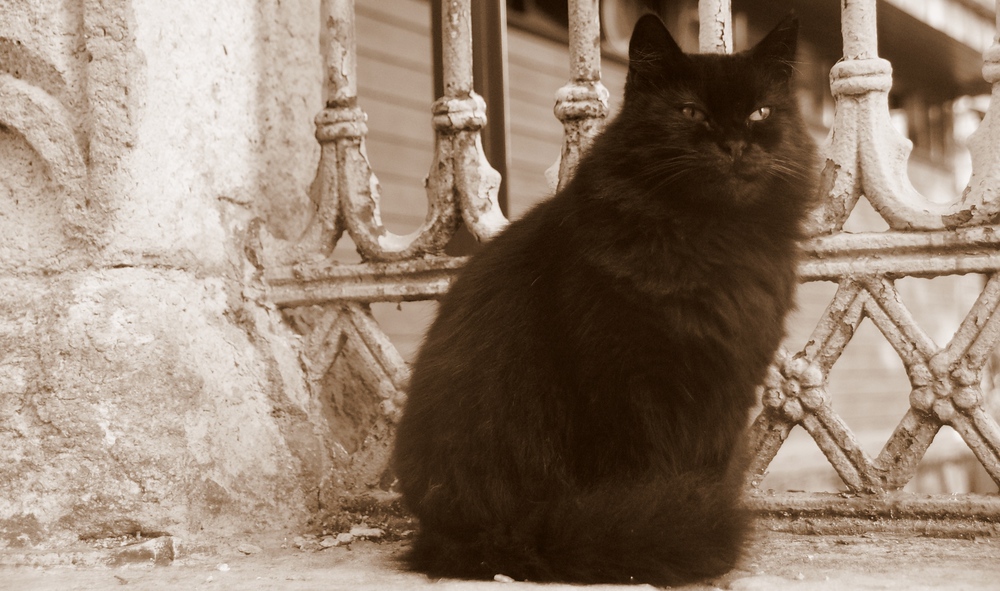 One thing I noticed distinctly different from Southeast Asia (where cats tended to look the same – scrawny and with stumpy tails) is that the cats of Istanbul are of all different shapes, colors, sizes and breeds. 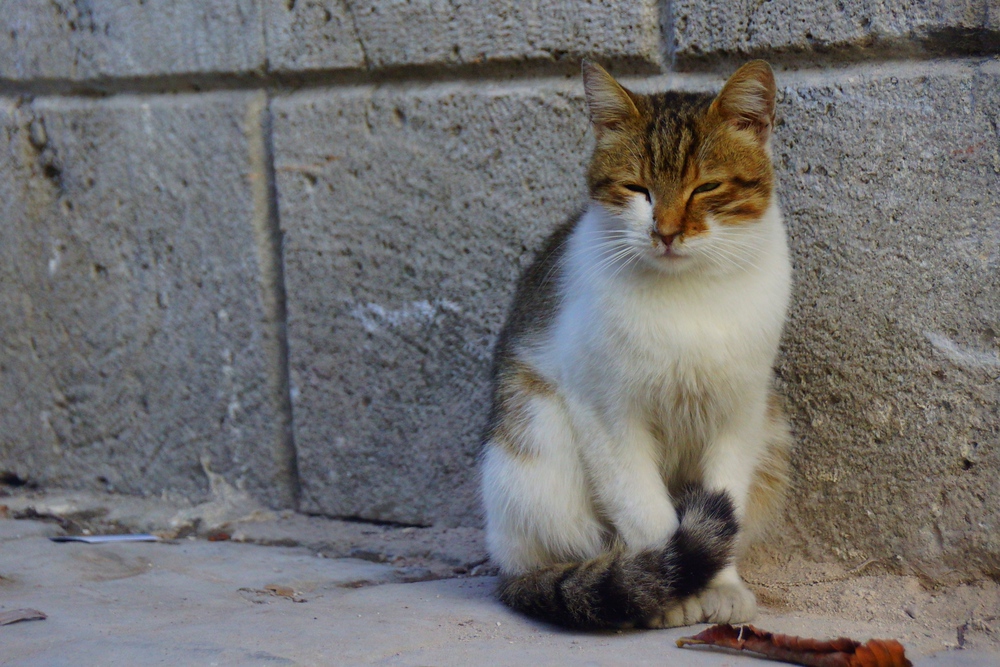 This kitty was especially friendly and closed its eyes and purred when we stroked its head. 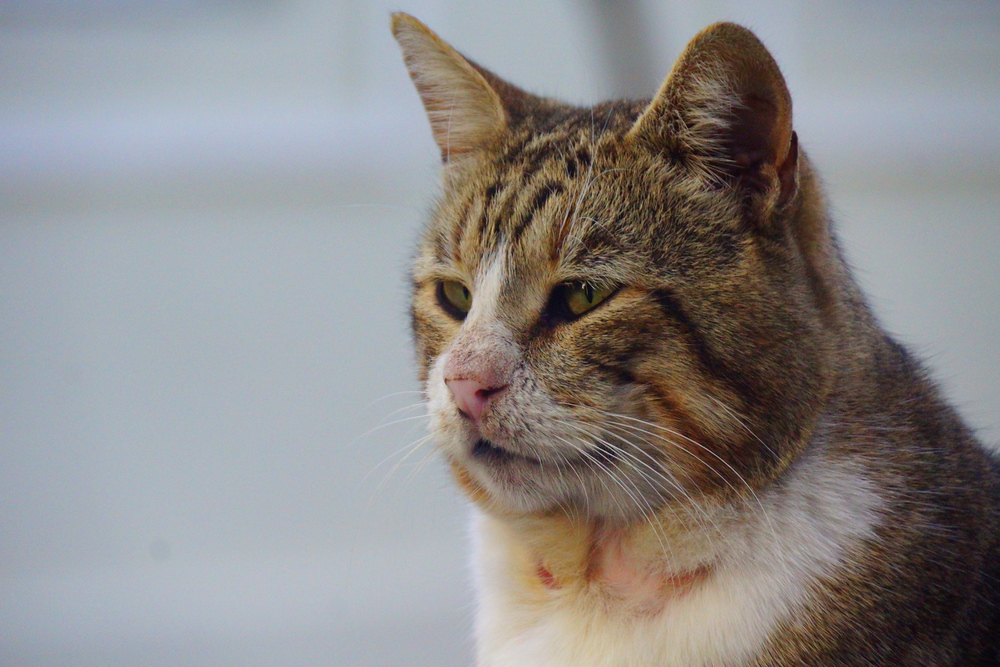 This cat reminded me of a scrapper I used to know when I lived on Vancouver Island. You can notice the scratch marks under its face and the feral look in its eye. 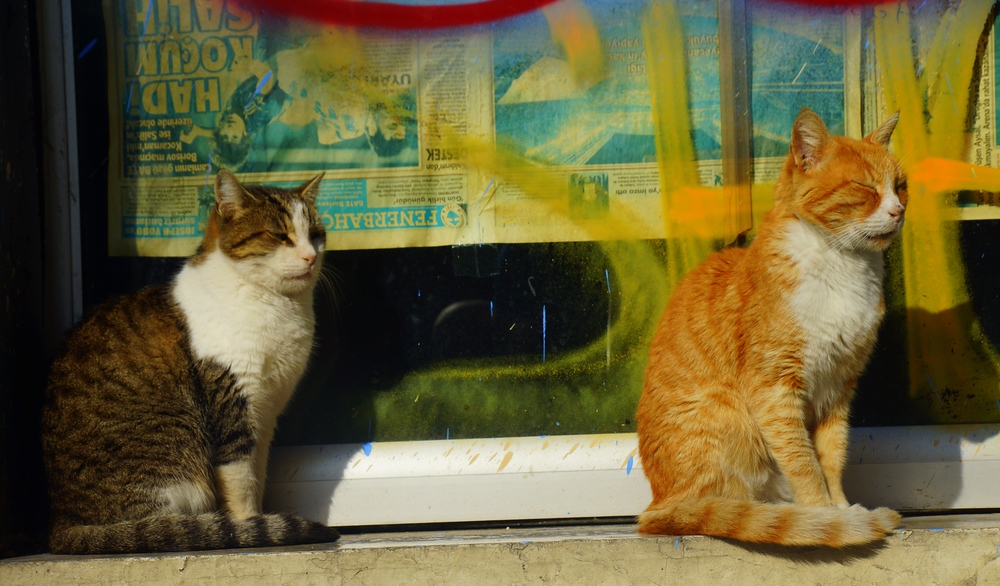 Two cats are always better than one 😉 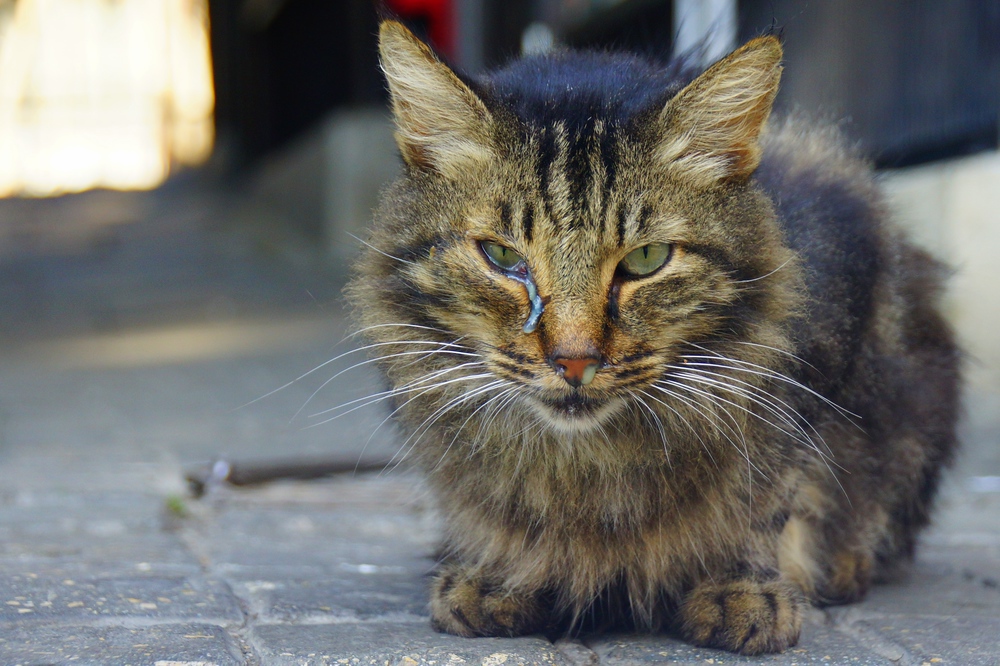 Unfortunately not all of the cats look completely healthy. This particular cat is clearly having some health issues as noticed by its runny eye and snotty nose.

Are you a cat lover? Would you like to roam around the streets of Istanbul petting cats? Let me know in the comments below: